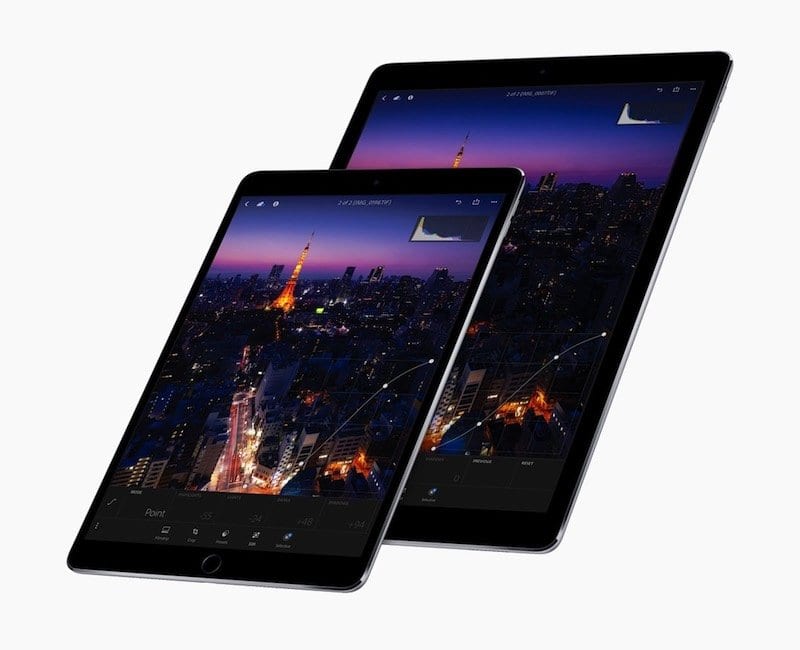 We can be certain that Apple is working on a new set of iPad Pro tablets for 2018. What those devices will look like, and what features or design elements they’ll include, is much less clear. But we do have a wealth of rumors and reports to draw on.

It’s not close enough to the 2018 iPad Pro launch to call any sure bets. That being said, there are several upgrades and new features that are pretty likely, according to a handful of supply chain reports and industry speculation.

It’s not a stretch to say that Apple will upgrade the iPad Pro lineup with the usual suite of hardware bumps.

For the 2018 iPad Pro models, we can expect them to be outfitted with a much faster processor. Cupertino typically uses a new chipset derived from the same architecture as the previous year’s iPhone. In other words, 2018 iPad Pros will probably sport an A11X chipset.

Apple has also been moving toward producing its own silicon for its devices, so an Apple-made GPU is also likely.

When it comes to storage capacities, those will probably stay the same: 64, 256 and 512GB. Apple could surprise us with an even higher-tier capacity, but that remains to be seen.

This goes without saying, but already embedded iPad Pro features like the Smart Connector and four-speaker audio are probably not going anywhere, either.

Here are a few of our other articles that highlight the various rumors, wishlists and possibilities for future Apple Releases.

The iPhone X is likely a good hint at where Apple is headed with its iOS devices.

In fact, most industry watchers and supply chain reports seem to suggest that this year’s iPad Pro lineup is likely to adopt some of the iPhone X’s design features.

That will likely include slimmer bezels and the lack of a Home button (which would also coincide with a switch to gesture-based controls, as on the iPhone X).

Apple will likely retain the 10.5-inch form factor for one of its iPad Pro devices this year.

As far as the 12.9-inch model, there’s been less said. But Apple could fit a larger display in this model with slimmer bezels. Alternatively, Apple could make the footprint smaller and keep the display size the same.

It’s not clear whether the standard iPad Pro cameras will change. They could get a slight megapixel and aperture bump, or they could remain the same as 2017’s lineup.

On the other hand, one significant upgrade we should expect is the addition of a TrueDepth Camera on Apple’s high-end iPad Pro models this year.

That’s a rumor that’s been corroborated by a variety of sources, including oft-accurate KGI Securities analyst Ming-Chi Kuo.

Of course, the introduction of TrueDepth to the iPad Pro lineup would also bring a switch to Face ID as the primary authentication method. It would also allow other advanced 3D mapping features such as Animoji.

Unfortunately, we have little idea what that means at this point. The full feature-set of iOS 12 is unclear, except for a few likely upgrades.

One of the likely additions is a new developer toolset that would allow cross-platform apps. Basically, developers will be able to create one app that works on iPhone, iPad and Mac devices. Along with other minor tweaks, Apple is also focusing on stability and quality this time around.

There’s been no word on additional iPad-specific features for iOS 12. At least, not yet.

On the other end of the spectrum, there are several changes and features that are much less likely. While it’s a bit early to confirm that these features won’t be included on this year’s tablet lineup, it’s probably best not to expect them.

While Apple is rumored to bring some of the iPhone X’s flavor to the iPad Pro lineup, there’s one big feature of that flagship we shouldn’t expect. At least, not at this point.

According to a November 2017 Bloomberg report, this year’s iPad Pro lineup is expected to retain the traditional LCD display technology of previous iterations.

That’s largely due to “technical and financial constraints.” Which makes sense. OLED technology is expensive, and that additional cost is pretty evident on the iPhone X’s price. It’s just not economical for a device as large as an iPad at this point.

Wireless charging is one feature that probably won’t make the jump from iPhone to iPad this year.

For one, there haven’t been any rumors about a possible switch for a glass construction for this year’s iPad Pro lineup. Such a construction change is necessary for Qi-based wireless charging.

There’s also the difficulty of adopting glass construction on a form factor as large as the 12.9-inch, or even the 10.5-inch iPad Pro. A footprint that large isn’t necessarily conducive to a glass back.

Apple also likes first-party integration. The fact that the upcoming AirPower wireless charging pad appears too small to fit an iPad Pro might be another reason for Apple to hold off.

Finally, we get the features and hardware changes that are hard to call one way or the other. Mostly, that’s because there isn’t enough evidence to either confirm or deny them.

While we’ll probably see slimmer bezels and a TrueDepth camera on the 2018 iPad Pro lineup, there’s a chance that they’ll come without the “notch.”

The iconic sensing housing has been a contentious subject for many Apple fans and detractors.

And while an argument could be made that Apple is going to “embrace” the notch, it’s just as likely to be an iPhone exclusive design.

The iPad Pro has a lot more display real estate to work with. Thus, it might make more sense to simply house the TrueDepth sensors flush with the slim top bezel of the device.

It’s not a secret that Apple is moving toward a wireless future, what with wireless charging and wireless headphones.

But even the latest iPad Pro models retain a 3.5mm audio jack. Apple could finally do away with it this year, but it’s just as likely to the jack on the device lineup.

In Apple’s own words, many “pro” users rely on the 3.5mm port for a variety of purposes. While the company was referring to the jacks on MacBook Pro notebooks, the same is likely true for iPad Pro users.

Apple may have a new generation of Apple Pencil in the works to coincide with its new iPad Pros.

Unfortunately, we just don’t know enough at this point to conclude that fact, one way or another.

The simple answer: we’re not sure.

Of course, if you’d really like to narrow it down, the two major possibilities are WWDC ’18 (expected sometime this summer) and Apple’s fall keynote (which typically takes place in September).