You are here: Home / News / 21% of Apple’s Autonomous Testing Fleet contributed the most miles in 2019

Based on the released data, Apple reported a total of 64 vehicle disengagements in 2019.

Apple had a total number of 69 vehicles that were signed up for this program in 2019. It appears that 21% of Apple’s testing fleet contributed to 95% of the total miles driven in 2019.

These are essentially 15 vehicles that drove over 7,229 miles in total. 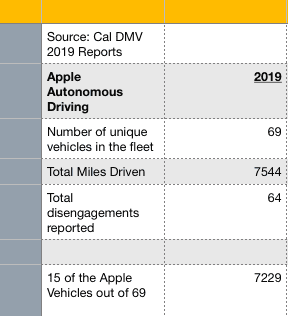 The rest of the fleet, 54 vehicles ,were little used with most of these vehicles showing less than 100 miles driven for the year.

In looking at the VIN number of the vehicle that reported the most miles,  we found that it is a 2017 Lexus RX 450h AWD 6 cylinders Hybrid DOHC model.

It will be interesting to see how Apple structures its autonomous testing initiatives in 2010. For now, the Lexus RX450h  F sport model seems to be doing the heavy lifting around Apple’s autonomous vehicle testing program. You can find the reported data from California DMV and check out the reports for other companies for yourself.