You are here: Home / Apple Watch / 7 Apple Watch and watchOS Features That You Didn’t Notice

Apple’s new watchOS 5 operating system is packed with useful features that make the Apple Watch platform an increasingly useful device for health, fitness, productivity, and a myriad of other tasks and categories.

You’ve probably heard about Walkie Talkie and automatic workout detection by now. But watchOS 5 — and older versions of watchOS — actually has a bunch of useful but less known features. While not exactly hidden in every case, these are incredibly handy things that you might not know about (but should).

Here are a few of our favorites.

7. Wake Screen on Crown Up

There are, obviously, quite a few scenarios when you don’t want a bright light shining from your wrist. Maybe late at night in bed, or when you’re watching a film at the movie theater.

Luckily, the Apple Watch has a cool brightness trick that comes in handy when you don’t want to blind yourself. It works as long as you have a Series 2 or newer.

Essentially, make sure your Apple Watch display is off — you can cover the display with your hand to do so. Then, just slowly rotate the Digital Crown upwards and the display will turn on at a low brightness and incrementally get brighter.

If you turn on Theater Mode before using this feature, the screen will stay lit at the brightness you have set with the Digital Crown.

Being able to quickly access the Now Playing app on your Apple Watch is great for those times when you aren’t feeling a particular song or podcast. And in watchOS 5, accessing the feature is even easier.

Essentially, when you’re playing audio, the Now Playing icon will appear as a notification at the top of your Apple Watch display. 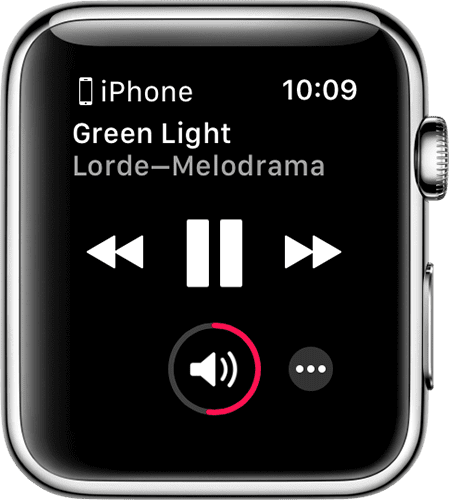 Tapping it will take to you the Now Playing app, or whichever app is playing audio. It’s much more convenient than using a complication, or navigating to the app screen to open Now Playing.

5. Automatic Do Not Disturb in Workouts

Getting a workout in can be tough sometimes. That’s especially true when the “outside world” keeps trying to ding you with calls and notifications. 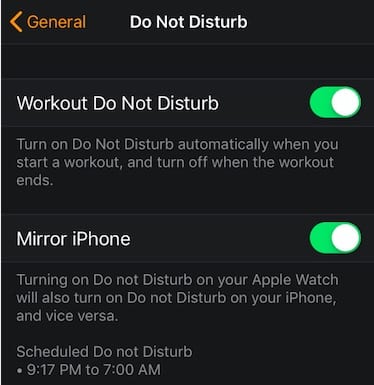 You can, however, put a stop to this. Basically, you can enable Do Not Disturb to activate automatically when you enter a particular workout in iOS 12.

Just navigate to the Watch app —> General —> Do Not Disturb. You can enable and set your exact preferences for the features here.

The Apple Watch Control Center, like its analog in iOS, is a useful and easy way to quickly access commonly used features on your wearable.

But it always had a weakness: it couldn’t be rearranged. That could lead to some frustrating mixups, not to mention that the lack of customization was iffy. 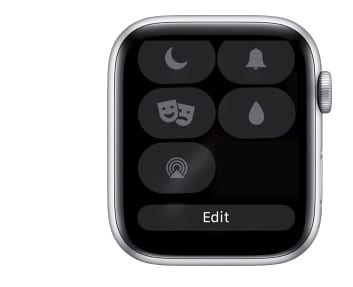 Luckily, watchOS 5 fixes this. At the bottom of the watchOS Control Center is an Edit icon. Just tap on it, and you can rearrange the icons by holding and dragging — just like apps on iOS.

The Control Center, like we mentioned in the previous point, is incredibly handy. But what happens if you can’t access it, which is typically the case when you have an app open on your Apple Watch.

In these cases, the Control Center and Notification Center aren’t accessible by swiping from the bottom or the top, respectively.

But in watchOS 5, there’s a quick workaround.

Apple is constantly working on updating and improving the software in its devices. Case in point: the movement detection algorithm has gotten a small update.

As iMore’s Rene Ritchie pointed out earlier this year, the new algorithm in watchOS 5 can actually track your fidgeting and add that movement — however small — to your activity for the day.

While a small improvement, it just goes to show that watchOS 5 is much more accurate at tracking movement. It’s worth noting that this updated algorithm likely ties into the Apple Watch’s ability to track Parkinson’s disease symptoms, too. So it’s a plus on both the health and fitness front.

Among other things, watchOS 5 improves the way that the Apple Watch platform handles notifications — which is particularly useful on such a small interface.

One of those ways is a new API that will let developers implement interactive elements into their notifications. That way, you can perform routine tasks without opening the associated app on your iPhone.

This will vary depending on the developer, but try it out the next time you see it. Tap on a notification and see if there are any quick options. For example, like the ability to check into a flight right from your wrist in an airline app.

The most popular feature that was released with watchOS 5 is probably the walkie-talkie feature on the Apple Watch.