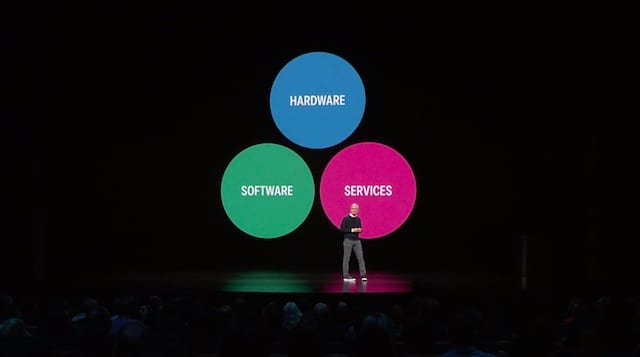 Today was a big day for Apple’s services business. The Cupertino tech giant announced several upcoming platforms, including original TV streaming service (Apple TV+) and a first-party credit card. Here are some of the major highlights from Apple’s event.

Arguably, some of the biggest announcements were related to the TV sphere. Here are the key takeaways.

Apple has officially announced its original TV content service — and it’s called Apple TV+. At its event on Monday, Apple had a slew of various actors, writers, directors and other celebrities tease the various TV shows that they’re working on.

Some of the big names included Steven Spielberg, Oprah Winfrey, Jennifer Aniston, Reese Witherspoon and J.J. Abrams. While the full slate of TV shows hasn’t been announced, we know that Apple is working shows like a reboot of the Amazing Stories anthology and a new Sesame Street program aimed at teaching kids coding.

Other than some of the shows being teased, we don’t know much else about the platform. It will be baked into the new Apple TV app (which we’ll cover below), but it isn’t clear how much the new platform will cost.

The first Apple original TV shows will arrive in the fall. The company says it’ll add new content every month.

Apple knows it’s a newcomer to the TV and film space, which is why it also debuted a new “a la carte” TV service alongside Apple TV+. It’s dubbed Apple TV Channels.

Rather than feature original TV content, Apple TV Channels will let users pick and choose from premium networks like HBO, Showtime and Starz. In that way, it’s a lot like Amazon’s own Prime Channels service.

Users will only pay for the channels that they want. And all of the premium content that they’ve purchased will be available on the Apple TV app, alongside Apple TV+ content and the full catalog of movies on iTunes.

Apple has also made some major changes to its TV app, streamlining the first-party platform in a way that makes it look a lot more like Netflix or other streaming services.

The TV app will make it easier for users to find all of the content that they want on Apple devices. It’ll also feature human curation and machine-learning personalized recommendations.

The Apple TV app, which will feature all of the aforementioned content, will first launch on iOS and tvOS in May. It’ll also become available on macOS for the first time in the fall.

It won’t be an Apple device exclusive, either. Apple says the app is also coming to several third-party smart TVs, as well as Roku and Amazon Fire TV devices, beginning this spring.

It wasn’t just a big day for Apple TV and original content. Apple also seriously bumped up the capabilities of its often-overlooked Apple News app with a new premium subscription service.

Apple News+, as the service is called, will give users unlimited access to more than 300 magazines on their Apple devices for $9.99 a month. That includes iPhone, iPad and Mac. Apple and its partners have beautifully optimized that content for mobile viewing, too.

Apple News+ will be accessible in the standard News app in iOS 12.2 and macOS 10.14.4. The former is available today, while the latter is coming soon.

More than that, the first month of Apple News+ will be free for all Apple device owners. Users will be able to share a single Apple News+ subscription with their family using Family Sharing.

One of the more unexpected announcements is the Apple Card, a full-fledged credit card that features tight integration with the Wallet App and Apple Pay.

Users can apply for the Apple Card directly on their iPhones and start using it right away. But the card itself isn’t just another branded credit card; it sports a number of benefits and unique features over similar offerings.

The Apple Card, issued in partnership with Goldman Sachs, has no annual fee, no foreign transaction fees and no late payment fees. Apple say it’ll feature some of the lowest APR rates on the market, and it’ll also pack in-depth budget monitoring and financial health tools right in the Wallet app.

But Apple Pay isn’t accepted everywhere quite yet. Which is likely why Apple is also debuting a physical and strikingly minimalist version of the card made from titanium.

As you may expect, Apple designed the Apple Card from the ground up with a focus on privacy. Apple doesn’t track your purchases — and it won’t let anyone else track them, either.

The Apple Card is coming this summer, but only in the U.S. initially.

Alongside original TV content, a premium news subscription and an Apple credit card, a gaming subscription service just doesn’t seem all that exciting. But overlooking the so-called Apple Arcade service would be a mistake.

Apple Arcade is an upcoming gaming subscription that will allow users on iOS, macOS and tvOS access to more than 100 exclusive games. Those games are full-fledged, bespoke offerings made specifically for Apple’s platforms. Users can download them from the App Store.

As you might expect, Apple Arcade will feature a very Apple level of usability and integration. Users will be able to play one game on their Mac. They can stop at any time and pick up their exact progress on another device.

Mobile gaming is quickly becoming one of the most important spheres of the overall gaming industry. Apple obviously knows that, and Apple Arcade is a sign that it’s going to capitalize on that popularity.

Apple Arcade will launch this fall as a new tab in the App Store in more than 150 countries.