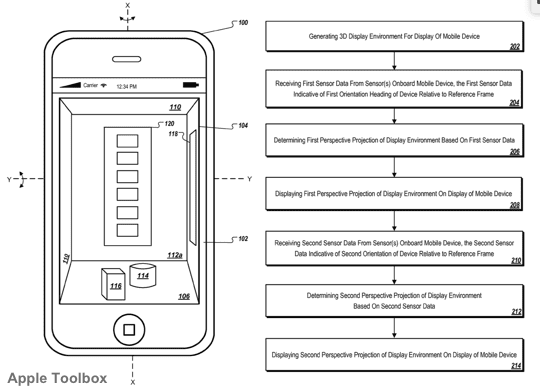 The United States Patent and Trademark Office (USPTO) awarded Apple a patent today for a 3D smartphone display which uses orientation data from one or more onboard sensors to automatically determine and display a perspective projection of the 3D display.

The patent entitled “Sensor based display environment” was discovered today by Apple Toolbox, and was originally filed for in July 2010. The authors describe the invention as:

Adding fire to the rumours of 3D iPhone, earlier this month Taiwanese website Economic Daily News reported that Apple may introduce a 3D display on next year’s flagship phones, and that the company plans to create a 3D hardware and software ecosystem. In fact, Apple has been exploring 3D for several years now, with a raft of patent applications for glasses-free 3D displays.

Apple describes various sensors which could be employed as inputs such as a gyroscope sensor, light sensor, and proximity sensor which could be coupled with other peripherals to facilitate orientation, lighting, and proximity functions of the mobile device. A gyroscope sensor can provide orientation data to a 3D graphics processing engine, to generate camera views of the display environment. Notably, Apple also mentions a “snap to” feature for changing camera position in the display environment.

The patent appears squarely aimed at smartphones but other devices are also mentioned including a media player, tablet and games console. It’s interesting that Apple has filed patents for 3D displays, not least because other companies like Amazon (with its Fire Phone) have already launched or are actively researching into 3D systems which can adapt to the user’s head position.

While it’s not clear how Apple intends to use 3D in future versions of its devices, it’s also not certain that there is consumer demand for such a product. However, in the context of the Apple TV, it may prove to be a useful feature, particularly if a new version of the company’s diminutive set-top streamer include sensors and motion detection – and support for games.

If Apple does intend to incorporate 3D in a future iPhone for example, it would do well to remember how the Amazon Fire Phone flopped before it pushes out 3D to the masses.