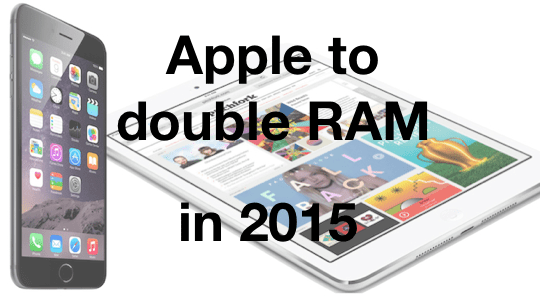 Apple may intend to double the RAM found in the iPhone and iPad in next year’s 2015 updates, according to a news report from Taiwanese website EMSOne which itself quoted financial news site Advanced Financial Network (Google Translate).

Both of Apple’s hit devices have come under criticism by many people who believe the devices need more memory, partly a result of Android smartphones and tablets that tend to have 2GB or more of main memory. The news report states that next year’s iPhone 6S will be endowed with 2 GB of RAM, while the iPad Air 3 will have 4 GB.

In the past, the argument has been that iOS is more optimised for the hardware that it runs on than Android (which runs on a multiplicity of devices), and therefore doesn’t need as much memory. Unfortunately, there have been lots of complaints on Internet forums in which people have complained in particular about tabs in Safari reloading, especially when there are lots of them open at once.

With the latest generation iPad Air 2, Apple has in fact beefed up the RAM from 1 GB in the iPad Air 1, to 2 GB according to iFixit who discovered as much in it’s iPad Air 2 teardown. The iPhone 6 and 6 Plus, according and iFixit’s iPhone 6 teardown still has only 1 GB. It remains to be seen whether Apple really will increase the iPhone and iPad RAM in future models, because that undoubtedly has an impact on battery life. But with ever more energy efficient CPU’s and other internal components, it may at last be possible for Apple to significantly increase the amount of memory in both devices.

You can read more about how to fix low memory issues with the iPad Air here and issues with Safari crashing in this article.