Largan Precision co., based out of Taiwan is not a household name for millions of iPhone aficionados worldwide. It is in fact one among hundreds of Apple Suppliers worldwide. It probably doesn’t even make it to the top 10 Apple suppliers list, given its size. 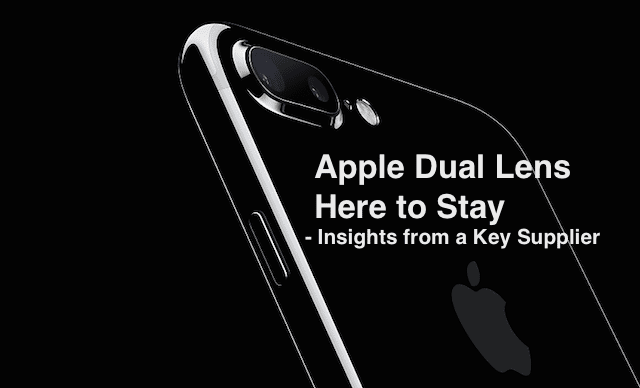 If you wanted to say Thank You to someone besides Apple for the beautiful bokeh effects on your new iPhone 7 plus, Largan Precision team would probably be one of the few teams to thank.

Largan Precision is one of the key suppliers that manufactures and supplies the dual lens systems that you find on the new iPhone 7 plus. The other supplier for this excellent dual lens unit is LG Innotek.

The company’s stock price has more than doubled in the last year. The stock increased from its trading price of NT$2025 in early Feb last year to more than NT$4240 this year. It is trading at a 5 year all time high.

Largan is doing so well because the optical-quality plastic lenses it makes for mobile phone cameras are unrivalled in their price and performance. Any higher-end mobile phone, be it an iPhone or an Android phone selling for above $400, relies on Largan lenses today.

In a recent Samsung patent filing that was approved in January by USPTO, the company showcases plans of using dual lens in its future smartphones. Other smartphone manufacturers such as Huawei have collaborated with companies such as Leica to offer dual lens systems for their new smartphones. Largeness EPS performance has been at its highest levels.

It is becoming abundantly clear that all future high end smartphones will offer a dual lens system of some type. As prices for these lens units come down, it will become a standard feature in most phones offering users powerful photography capabilities that were up until now reserved for only pro DSLRs.

Where do we go next with camera technology on our smartphones now that we have powerful zoom and bokeh capabilities? Many users rank the camera quality in a smartphone as one of the key features during their purchasing decision-making.

There is bound to be more innovation as lens designers and manufacturers up their ante to create differentiation strategies to offer new capabilities to users in future smartphones.

Based on the current financial performance and projection of Largan, it appears that the love story around dual lens will continue on for sometime.