You are here: Home / News / 5 Surprises From Apple’s Earnings Today

Apple reported its fiscal third quarter earnings today. Things were uncommonly calm before the earnings call. The CBOE Apple VIX Index, which tracks volatility expectations for shares of the iPhone maker, closed yesterday at its second-lowest level on record before an earnings release, and 16 percent below its one-year average. Expectations from Apple’s performance have been historically low and the stock has been expected to take a nosedive after the earnings report. 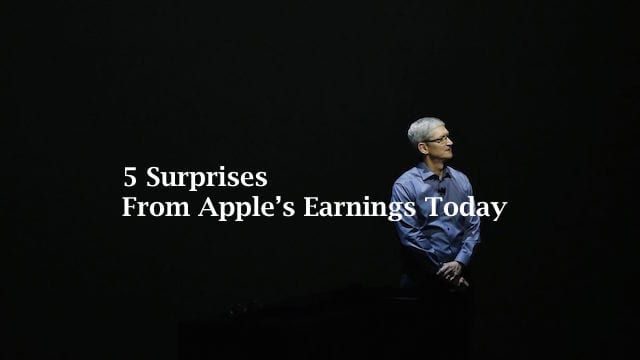 40.4 Million iPhones were reportedly sold by Apple this quarter. Yup, that’s the number that everybody was waiting on. This proved below some analyst’s expectations marking the second straight quarter in which Apple will have recorded a year-over-year sales decline.Total Sales for the quarter were $42.3 billion. Gross Margins held at the projected levels.

Now that the big number is out of the way, lets peel the onion a little more and see what were some of the major surprises from the earnings call.

5 Surprises that we learnt from the Earnings call today:

There has been a lot of chatter about the iPhone SE gaining momentum with the consuers. In the absence of a new and advanced iPhone model, the general consensus was that the new iPhone SE model will provide a cushion to the falling sales. Here is what we learnt today.

Although official number of unit sales by model was not available, Tim cook reiterated the potential of iPhone SE sales by saying that it has found a good market in both developing and developed markets. Switchers accounted for highest quarterly sales. More people switching fro Android over to Apple platforms. Highest Switcher Rate experienced in a long time.

This quarter marked a lot of noise from China when it comes to Apple. The iTunes store was shut down for some of its offerings. Beijing banned the sale of iPhone 6 models under the pretext of patent infringement and supposedly the iphone was first trademarked in China. Where China used to contribute 25 cents of every dollar earned by Apple, it has dramatically fallen to 20 cents this quarter.

While last year for this same time, China related revenues were $13.2 bn, the current quarter saw worrying trends with China only accounting for $8.8 bn of revenues.

As the flagship iPhone market matures in a market faced with global macroeconomic headwinds, there has been an expectation that Apple will be able to show incremental revenue growth via its Apple’s store and enterprise business.

In the March quarter, Apple reported that revenue from the App Store, iTunes, streaming-music subscriptions and mobile payments grew 20% to $6 billion even as iPhone sales declined. Average amount spend per customer is at record levels.

This will be further helped when Apple releases its new Apple Watch in Sept. Tim Cook confirmed that the new Watch will be available this fall.

Sold 10 milion iPads with a lot of boost coming from iPad Pro 9.7 inch models. This has been the best ipad sales in the last 10 quarters.

Half of the people surveyed said that they are using the new ipad pro for work purposes clearly highlighting the otential for the device to become an enterprise standard in future quarters. Partnership with SAP is going to be help out here a lot in building up the enterprise case.

In looking at the current earnings results, it is clear that the momentum is healthy and the revenues were $5.9bn million a growth of 19% over third quarter from last year.

93% of all cash held by Apple is held outside United States. Not quite a surprise there. Unless policies are changed by the government, Apple will perhaps continue preserving its cash outside US for tax purposes.

While last year, the comment summarizing the quarter performance from Tim was as follows:

““We had an amazing quarter, with iPhone revenue up 59 percent over last year, strong sales of Mac, all-time record revenue from services, driven by the App Store, and a great start for Apple Watch,” said Tim Cook, Apple’s CEO. “The excitement for Apple Music has been incredible, and we’re looking forward to releasing iOS 9, OS X El Capitan and watchOS 2 to customers in the fall.”

This year saw a more somber remark from the Cupertino men with worries, carefully injected with some optimism to look forward to:

““We are pleased to report third quarter results that reflect stronger customer demand and business performance than we anticipated at the start of the quarter,” .”Our Services business grew 19 percent year-over-year and App Store revenue was the highest ever, as our installed base continued to grow and transacting customers hit an all-time record”

It is becoming clear that 2017 will be the year based on new product releases. What Apple perhaps needs at the moment is a transformative deal in order to lift itself. Acquisition opportunities in this market are plentiful given present valuations.

With significant resources under its belt, Apple should play up a chapter from its M&A book and put the investors doubts at rest. Until then with all the projections and announcements around stock buy back and dividend growth, Apple is beginning to sound more like a value play at best.

And yes, “Carpool Karaoke” doesn’t count as a transformative deal.