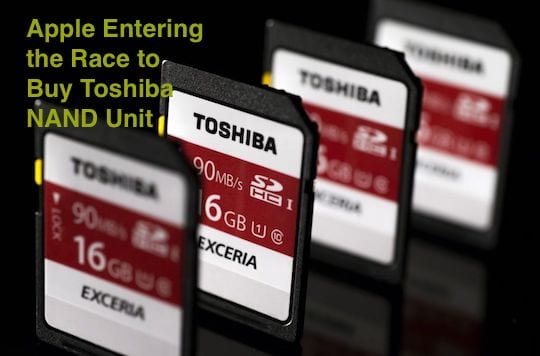 Apple is joining the bidding process in order to acquire Toshiba’s NAND flash memory unit. The other potential bidders for this include Google and Amazon. Yomiyuri Shimbun daily reported this new development.

NAND Flash memories have been in short supply for quite some time now leading to higher component price for iPhone. This vertical integration opportunity will offer Apple more flexibility when it comes to releasing new iPhone models to its consumers.

The NAND memory unit is a significant cost component of iPhone. According to a report reduced by Business Insider last year, the base 32GB of storage costs Apple $16.40 per iPhone sold. Other expensive components include the chip, which is estimated to cost $26.90, the display, at an estimated price of $43, and the device’s two cameras, which could cost $19.90 per phone.

Apple has also been increasing the standard memory capacity of its iPhone models.

The iPhone 7’s storage options starting with 32GB represents a several-fold increase in Apple’s consumption of NAND Flash. The company has dropped offering devices at 16 GB.

When it comes to the software side of things, Apple has made changes starting with iOS 10.3 by adopting its APFS file system. This new file system helps with faster and efficient processing of flash memory.

If Apple is successful in acquiring this Toshiba unit, it will probably lead to higher profitability for the company as the ASP (Average selling price) for iPhone is expected to trend higher in the coming years. This will also allow Apple to bring chip level design changes in the future.

Toshiba has been facing financial problems since it had to write down $6.3 billion for its US Nuclear division. The company is expecting to raise at least $8.8 billion via sale of its Flash memory unit.