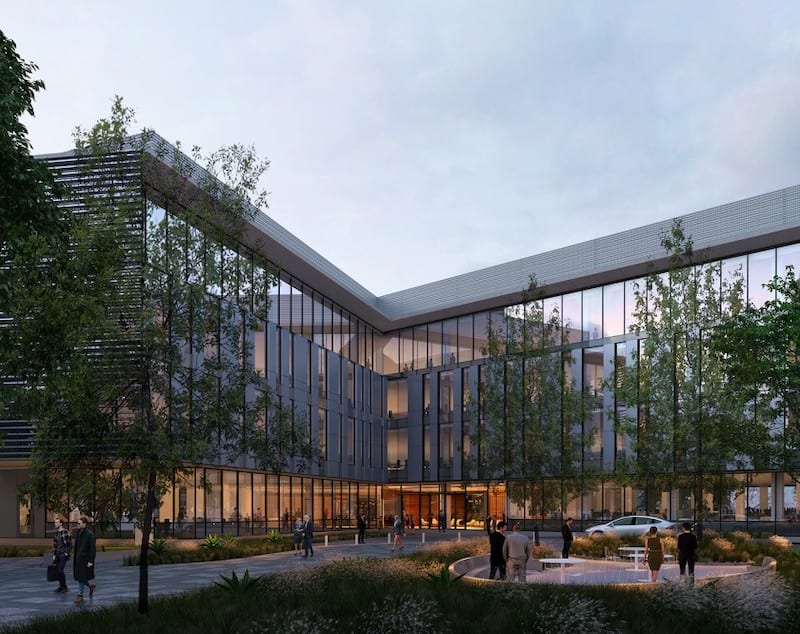 Apple appears to be ramping up its development of first-party smartphone modem technology right in its biggest competitor’s backyard.

More specifically, the Cupertino tech giant seems to be expanding its efforts to establish an engineering workforce in Qualcomm’s home city of San Diego.

One of the surest signs of that is the fact that Apple has leased a second building in the San Diego area.

According to a November report from the San Diego Union-Tribune, Apple confirmed that it would be the tenant for a 204,000-square-foot building on Towne Centre Drive in University City called the Apex project.

The new development would be Apple’s second office location in the San Diego region.

According to the U-T, the new office building is actually right next door to a 100,000-square-foot research and office building that Apple leased from Irvine Co. earlier this year.

Neither office project is actually completed, however. The U-T reports that work on the first office building is “wrapping up,” suggesting that it’ll soon be ready for employees.

It isn’t currently clear how many people Apple employs. But earlier this year, Apple announced that it plans to hire about 1,200 workers in the San Diego region before the end of the year.

With that being said, it does appear that Apple is increasingly hiring cellular and wireless engineers in San Diego.

Hiring is ramping up

At the time the Union-Tribune reported the new office development, the publication noted that Apple had 87 open positions in the San Diego region.

Most of those openings list positions in the radio-frequency, wireless or cellular technology spheres. Those are all fields directly related to the development of smartphone modems.

Even now, Apple’s jobs page has open positions for RF Software Automation and Wireless Systems engineers. It’s worth noting that the number of positions has dropped to 36 as of the writing of this article.

All of this does suggest that Apple is looking to ramp up hiring of local engineering talent in San Diego.

Since one of the tech industry’s most significant smartphone modem manufacturer is based in the city, you can probably guess what Apple is trying to do.

The shaky history of Apple and Qualcomm

San Diego is thoroughly Qualcomm’s home turf. According to a 2017 report by MetroMBA, Qualcomm was among the top 10 employers in the city. When it comes to technology companies, it was by far the largest.

But Apple bumping up its research and engineering footprint in the city is also significant because of the tortuous legal battle between it and Qualcomm.

With Intel’s exit from the smartphone modem business, which we’ll get to below, that really means that Qualcomm is Apple’s only real supply option in the space.

Apple, for its part, has long tried to reduce its reliance on single suppliers. Which brings us to where all of this is likely headed.

What the future holds for Apple modems

Rumor has it that Apple is working to develop a first-party modem chipset for future iPhones. And based on the signs, it looks like the company is quickly moving along on that goal.

There’s Apple’s ramping up of its engineering footprint in San Diego, which is an obvious sign. But Apple also recently acquired the “majority” of Intel’s smartphone modem business.

Apple has actually made a name for itself in the chipmaking sphere. The company’s smartphone chips often perform much better and more efficiently than similar Android chipsets.

Despite that, the company has had a slow road when it comes to modem technology. Some reports suggest that it wouldn’t have a first-party solution ready for at least a few more years.

But Apple undoubtedly wants to lessen its reliance on Qualcomm. With an established presence in San Diego and armed with Intel’s modem business and intellectual property, it may just be able to reach that goal sooner than later.