You are here: Home / Mac / What To Expect at Thursday’s MacBook Pro event…

It’s been highly anticipated for quite some time now – Apple is all set to host a Mac-related event at its Cupertino headquarters tomorrow, setting the stage for significant Mac update. The “Hello Again” invite went out last week, a somewhat cryptic tagline that didn’t really give much away about what we can expect.

However, thanks to a slew of trademark filings uncovered by the tech press (most notably, Brian Conroy from The Trademark Ninja) in recent months, as well an alleged leak this week of pictures contained within the latest version of macOS Sierra, it looks like the highlight of the show will be the so-called Magic Toolbar.

If, like me, you’ve been dying to upgrade your MacBook Pro for some time now, it’s been a painfully agonising wait, with current models sporting out of date processors and other specs. It’s about time the Macs were updated, and at long last the reveal is almost upon us.

Before we get onto the toolbar itself, here’s a quick rundown of what we can expect to see tomorrow in terms of specs and features.

Firstly, the general consensus is that while we can look forward to a completely redesigned MacBook Pro, it’s unlikely that the other Mac models will see much of an update – the MacBook is said to gain a faster processor, and perhaps an additional USB-C port. The iMac line meanwhile might see a processor upgrade to Intel’s previous generation Skylake CPUs, as suitable Kaby Lake processors aren’t yet available in sufficient quantities. I’d be surprised therefore if the iMac is updated at all – it’s much more likely to be early next year. 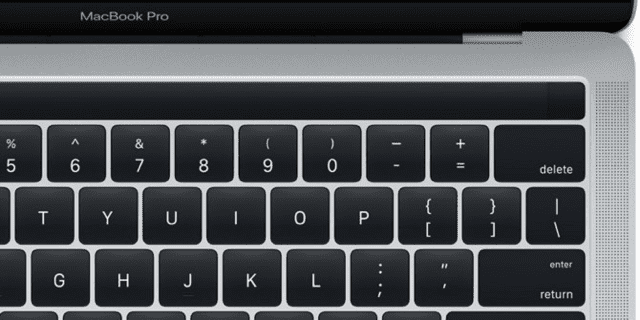 Will the even-popular MacBook Air finally get a Retina screen? Again, that’s also not expected to be on the cards, as Apple concentrates on its power-user machines and the thin-and-light MacBook. If there are any changes, we can expect a simple processor upgrade and perhaps a move to USB-C.

It’s also not likely that new iPads will be unveiled tomorrow – rather, a Spring update might be the earliest…

So, as far as tomorrow is concerned, the ageing MacBook Pro looks all set to be the star of the show. If you are hoping to see Intel’s latest generation chipset to be powering the new models, I think you’ll be disappointed – Skylake is a much more likely proposition. But what does that mean? For starters, the Macs won’t receive the latest, most powerful chips with speed efficiencies and even better battery-saving technologies. Thankfully however, Kaby Lake CPUs are more than enough for the majority of MacBook Pro users, and should also allow for a simple spec bump when the more powerful CPUs are available.

Just like CPUs, every time Apple updates its Macs, they usually gain better graphics chips, and tomorrow will be no exception. AMD GPUs on some models will allow faster games with higher framerates, although the 13″ MacBook Pro and the lower-end 15″ models should come equipped with Intel’s less powerful (but still capable) integrated graphics.

When the MacBook launched last year, Apple took great pains to highlight its new butterfly-switch keyboard, which saves space (allowing for a thinner and lighter machine) as well as improving the stability of each keypress. Since the new MacBook Pros are expected to be thinner and lighter, it’s highly likely that the new keyboard design will adorn the whole lineup – frustrating those who feel the keyboard is less tactile than the current version. It’s one of those things that tends to divide opinion with some people loving the feel, and others not so much.

Another change we’re hoping to see is an even larger trackpad. Apple is renowned for having the best trackpads in the industry, and an even larger surface area will be a welcome addition. Of course, force-sensitive trackpads are the norm on Apple laptops these days, and we’ll see that trend continue on the new models.

Perhaps one of the most controversial changes to the new MacBook Pro line will be the addition of up to 4 USB-C ports. That sounds great, right? Unfortunately that means that probably loss of the much-loved and wonderful MagSafe power connector (unless Apple can come up with a way to integrate this into the USB-C cable), as well as no more SD card slot.

On the upside, USB-C ought to simplify connectivity in the long run as more and more peripherals become available, and it’s certainly the future as far as laptop connectivity is concerned. One question on everybody’s minds is whether Apple will drop the 3.5mm headphone socket as they have done on the iPhone. That seems unlikely to us, because even though it would be consistent across Apple’s devices, saving that much space inside a laptop doesn’t seem like a high priority and it would certainly cause a lot of frustration. 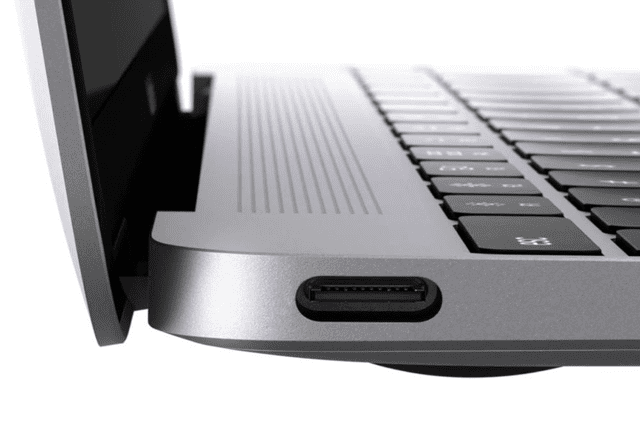 One thing I’d like to see in the new models is a thinner bezel around the screen. Apple is said to be planning a new hinge mechanism (the same as used on the MacBook), as well as relocated speakers on the side. That will mean better sound as well as hopefully more space to trim the bezel space around the screen. Unfortunately, it doesn’t look like Apple will increase the display resolution on any of the MacBook Pros. Current models already sport fairly high-res screens, which are certainly good enough for another year or two, but one improvement we might see is adoption of the ‘wide colour gamut’ technology (just like the iPhone), giving more accurate and realistic colours – which will be a boon for keen photographers and graphic artists.

Now let’s discuss two of the most highly-anticipated features coming to the MacBook Pro – the addition of Touch ID and the OLED display above the keyboard, replacing the usual row of function keys. 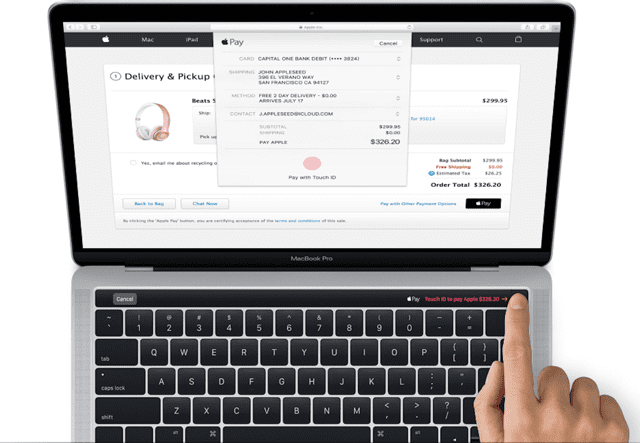 It was several months ago that the term “Magic Toolbar” was first spotted, before leaking on Tuesday in code hidden in this week’s macOS Sierra update. The pictures posted online do seem to show the rumoured OLED display which is completely black when the computer, as well as what looks like an adjoining button for fingerprint recognition. The images also show somebody using it to pay online, and the words “Touch ID to pay Apple” can clearly be seen on the display with an arrow pointing to the button (as well as a Cancel button on the left). It’s almost certain that since there doesn’t appear to be a dedicated on/off button, it will be used as the power button, a Touch ID sensor for Apple Pay, as well as a quick, secure and easy way to login to your Mac.

The new OLED touch bar is said to provide dynamic, application-specific shortcuts in full colour. For example, when playing music, play/pause and skip controls might appear, or when using apps like Pages there might be commonly-used shortcuts. How users would access current functions such as keyboard and screen brightness is unclear, but no doubt Apple has found a way to present relevant controls in a way that is intuitive and simple to understand. This also means there may be no permanent ESC key, so at this point it’s not easy to see how it would be permanently available in the new, dynamic keyboard layout.

One of the more interesting recent rumours was that Apple was working on a completely dynamic e-ink keyboard for the new MacBook. That’s almost certainly not happening this year, but if the firm’s recent dealings with Australian firm Sonder Design is anything to go by, it might be something that’s planned in the next year or two. Imagine a future Mac keyboard that has the Magic Toolbar in addition to a fully customisable set of chiclet keys – meaning no need for keyboard layouts for different markets, as it would make it simple to display any number of international languages and functions.

There’s not long to wait now until Thursday’s Mac event, and after witnessing the latest Jony Ive video explaining the Magic Toolbar, hopefully the consensus will be that Apple is once again advancing the state of the art in laptop design with the new MacBook Pros.

If any other devices are released (such as the new AirPods) or updated (Mac Mini) or unexpected new products are announced, it will simply be the icing on the cake. Personally, I’m hoping for a matte black version of the new MacBook Pro…