You are here: Home / News / Apple is the new Microsoft (and here’s why that’s not a bad thing)

In the world of business, you’re either big and slow OR small and fast. Very few companies juggle the tradeoffs of size and speed to become both BIG and FAST. Fortunately for us, Apple is one of those companies.

If you’ve ever worked at a big corporation or a startup, you’ve undoubtedly experienced these differences in speed and size. From the point of view of a small startup, speed is the key variable leading to success. While small companies can’t beat the big guys in terms of resources and influence, a small business can outmaneuver a big one if it’s fast enough.

Once a company starts dominating a market, however, the priorities change. Instead of seeking breakthrough innovation, established businesses pursue profitability and stability. Small startups love disruption and change, while bigger companies prefer to maintain the ecosystem “as is,” so that they continue cashing in on their favorable position.

Apple was an anomaly

Under the leadership of Steve Jobs, Apple was the big player that moved at breakneck speed. Think about this: in the first 12 years since Steve Jobs re-took the helm at Apple, they created iTunes, the iTunes Store, the iPod, the iPhone, and the iPad. Each of those products created an entirely new market category and economy. In the process, Apple overtook Microsoft as PC market share leader and re-established their brand as one of the most valuable in the world. Each Apple breakthrough had a global impact, creating ripples that we still feel on a daily basis.

It’s interesting to analyze how Apple got to this position. During Apple’s formidable growth, Steve Jobs always had Tim Cook by his side. Tim Cook is a supply-chain expert and incredibly talented at maximizing profitability and efficiency (check out this Fortune article from 2008 praising Cook’s behind-the-scenes brilliance.) It was this unique combination of skills (the genius of Steve Jobs and the efficiency of Tim Cook,) that created the Apple that we know today. Without Tim Cook, Apple’s success may not have yielded enough profit to fuel future innovations. Without Steve Jobs, Apple is left with incredible efficiency but without a creative genius driving the wheel.

Apple today is like a fast-moving elephant: a lot of momentum, but not a lot of agility.

In the 90s, when Microsoft became the world leader in PC and software sales, they predictably slowed down their pace of innovation. Instead of focusing a ton of energy on innovations (like the Zune), they instead put their energy into slow and steady growth with incremental changes to their core product. Tim Cook and the rest of the Apple gang have tried to maintain Jobs’ legacy of innovation with products like the Apple Watch, but it simply isn’t the same. Apple today is like a fast-moving elephant: a lot of momentum, but not a lot of agility.

So what does this mean for us? 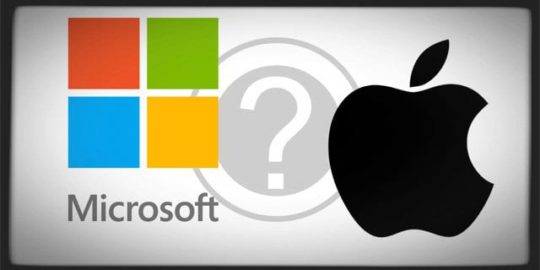 Apple is in the same position Microsoft was 15 or so years ago. They’re a cash cow riding the momentum of all those previous breakthroughs (iPhone, iTunes, etc.) But unlike Microsoft, Apple is poised to fundamentally change the way tech companies continue to innovate. That’s true if and only if they continue down a very particular path. Let me explain.

As CEO of Apple, Tim Cook tends to favor innovation that is closer to his area of expertise: supply chain management. Even Steve Jobs admitted that Tim Cook was not really “a product guy.” What this means is that any new technology that Apple brings to the marketplace has the biggest impact behind the scenes. Consequently, that tech is not obvious in their product lines, especially to consumers. For example, Apple’s moves in China and India, where they’re partnering with massive solar power companies and alternative energy providers, is monumental when it comes to innovative tech manufacturing.

Think about this: if Apple shows the rest of the tech world that they remain hugely profitable using alternative energy as the backbone of their operation, why wouldn’t the rest of the industry follow?

Apple’s efforts to take apart and recycle mobile components systematically are another great example. If you systematize the electronic recycling process, not only does this improve the company’s bottom line, but it also keeps harmful electronic materials from polluting the waste stream. These efforts aren’t just commendable from a moral standpoint; they are potentially standards that industry adopts as new benchmarks. Such is the advantage of being a market leader.

I know Apple’s corporate culture is entirely different from Microsoft’s and leaning on those differences is the key. Apple’s rapid growth had journalists calling Apple the “new Microsoft” since at least 2007 (that’s the earliest example I could find.) The subtext behind this label is that Apple’s lost its mojo and has gone from “fast and cool” to “big and boring.” While that perspective has some weight, I think it’s more important to focus on the momentum Apple carries and where that direction leads.

It’s not a bad position to be in.

With great size comes great responsibility. It’s entirely possible that Apple eventually loses its mojo and becomes that “big and boring” brand that follows Microsoft. But it’s also possible that in the style of Tim Cook, all these understated innovations continue to fly under the radar and appear boring. But, in actuality, those behind-the-scenes moves may just end up having profound consequences that ripple throughout the entire tech industry. So yeah, Apple might be the new Microsoft, but that’s not necessarily a bad thing.