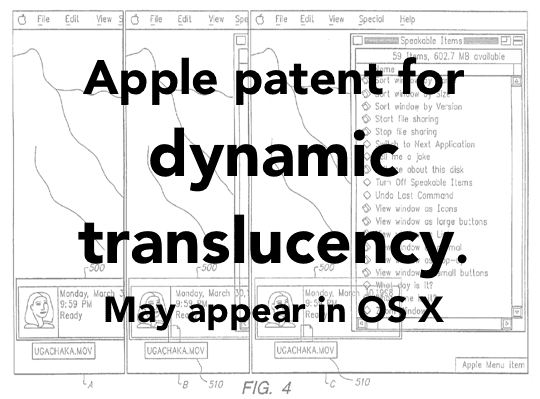 On Thursday, the U.S. Patent and Trademark Office (USPTO) published a patent application by Apple for a method of dynamically varying the translucency of windows in a desktop OS, suggesting that more extensive and innovative use of transparency may appear in future versions of OS X.

The patent application discovered today by Apple Toolbox, entitled “GRADUATED VISUAL AND MANIPULATIVE TRANSLUCENCY FOR WINDOWS” describes the problems with overlapping desktop windows such as information and objects being hidden or difficult to find. It proposes to overcome such issues by progressively varying window transparency based on time or specific events – for example, if the content of a window doesn’t change for a set period. The authors go on to state that, upon reaching a specific level of transparency, user input will affect the underlying objects (i.e. icons and other windows) instead.

Apple cites the example of a speech recognition program that displays a floating window overlaying other document windows, but only provides useful information when the user is actively engaged in issuing commands. The rest of the time, the application window remains open but obscures what’s beneath it; a common problem encountered by anyone that uses a desktop OS today.

The method of changing a window’s translucency over time also has other benefits for computer users:

Apple has already made extensive use of translucency in the latest version of its desktop OS, OS X Yosemite. Open Finder windows and many application sidebars allow part of the background to show through, providing useful visual feedback about what else is open. Other operating systems have used translucency to varying degrees in the past (such as Windows Vista), but Apple’s implementation is fairly subtle, and has been largely praised by its users.

Apple looks to be examining how translucency can be used in more novel and unique ways in OS X, making it easier for users to find and manipulate objects, windows and icons on-screen. Whether or not the invention described will ever be used remains to be seen, but improvements in the usability of Apple’s desktop OS are always welcome.

Besides the translucency and flat design aesthetic in OS X Yosemite, there are lots of new features such as annotations in Mail and Continuity.