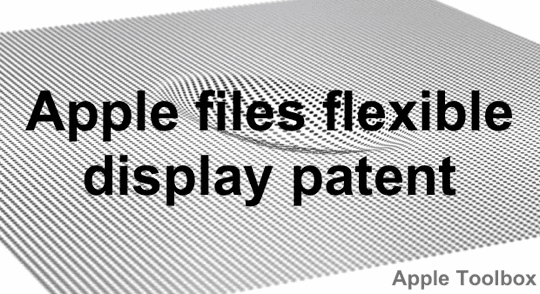 Apple filed a patent today with the United States Patent and Trademark Office (USPTO) for a flexible display which deforms when touched. Underneath the display could are a range of sensors and actuators that may temporarily or permanently deform to provide tactile feedback to the user.

The patent application entitled “Electronic Devices With Flexible Displays”, was one of more than 153 submitted by Apple. Discovered by Apple Toolbox today, it appears related to the forthcoming Apple Watch, although it’s clear that the concept could also be used in other products in the company’s lineup. In fact, the images in the patent application also show a representation of an iPhone and a MacBook.

Flexible display with sensors and actuators beneath the surface

The invention also goes onto describe electrical components under the surface, where the component comprises a button which is actuated when the user applies pressure to the screen. Perhaps more interesting however is the description of a microphone enclosed beneath the surface which picks up external sound waves through the screen (and in fact that microphone was also described as a laser microphone) which has the advantage that the external ports and buttons could all be completely enclosed.

Besides the Apple Watch (where the concept is called Force Touch), such a flexible display may be well suited to a future iPhone, in order to embed some of the sensors beneath the display, or to wrap more of the iPhone in glass. The technology already looks like it’s being adopted in the watch, so it will be interesting to see whether Apple extends the idea to other devices.

You can read more about the Apple Watch on Apple Toolbox here, in addition to other display patents in this article.