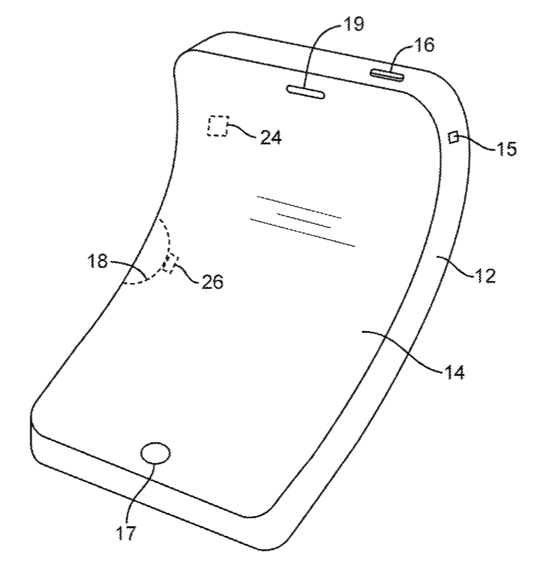 Apple has been granted a patent by the United States Patent and Trademark Office (USPTO) today for flexible electronic devices where all the electronics, not just the screen, are made from flexible materials.

The patent describes the need for flexible electronics that use flexible components such as organic light-emitting diode (OLED) displays that may help to avoid damage in the event of an impact such as a drop of the device on a hard surface, and that “It would therefore be desirable to be able to provide improved electronic devices”.

Furthermore, flexible electronic devices may be more resistant to damage during impact events such as drops because the flexible device may bend or deform while absorbing the impact. Deformation of this type may increase the duration of an impact thereby reducing the impulse received by other components of the flexible device.

Some of the mechanisms by which the devices can be made flexible include:

What can a flexible device be used for?

As another example, user interface components may be configured to detect a twist of a flexible electronic device. User interface components may be configured to initiate a response from the device to the detected twist such as turning the device on or off, entering active or standby mode, answering a cellular telephone call, starting a software application, changing a volume associated with audio or video playback of media, starting or stopping audio playback of media, etc.

The patent was first filed for in September 2011, but there have also been several examples of flexible phones released since then, notably the LG G Flex, and the new LG G Flex 2 which was revealed at the Consumer Electronics Show (CES) in Las Vegas this week. It’s not clear how the Apple patent will affect existing consumer products, or exactly what patents LG owns in relation to flexible displays.