You are here: Home / News / Apple invents a new Home Button which also functions as a Joystick 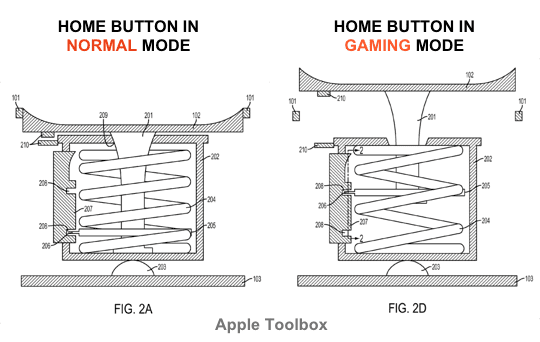 Apple filed a patent today with the U.S. Patent and Trademark Office (USPTO) which describes a unique Home Button invention that can be used either as a regular button or as a gaming joystick.

The patent demonstrates that Apple is considering ways to improve on the design of the Home Button to be a more useful input device, especially oriented around gamers. Whether it will actually be incorporated into a future iPhone or iPad remains to be seen, especially as Touch ID is already integrated in the existing Home Button, but it would be a welcome feature that would make the company’s iDevices much more user-friendly to gamers.

Background of the multi-function Home Button

Similarly, touch screens (which may be well suited to applications such as an Internet browser application) may offer some advantages for operating game applications on portable devices, but they may also have shortcomings. For example, a user’s finger may need to cover part of the screen while the user is controlling the game. This may interfere with the user’s ability to see what he is controlling and/or other portions of the game display. Additionally, a touch screen may be unable to provide tactile feedback and the ability to provide tactile feedback during a game may enhance the user’s game experience. Some gamers hold the opinion that realistic game play cannot be fully experienced without joysticks and/or tactile buttons.

In the first mode, part of the Home Button may be flush with the device’s surface or recessed in the surface, and may be able to receive z axis input data.

In other words, the Home Button may have a button mode and a joystick mode.

The following diagram illustrates just how the Home Button would pop up when pushed. 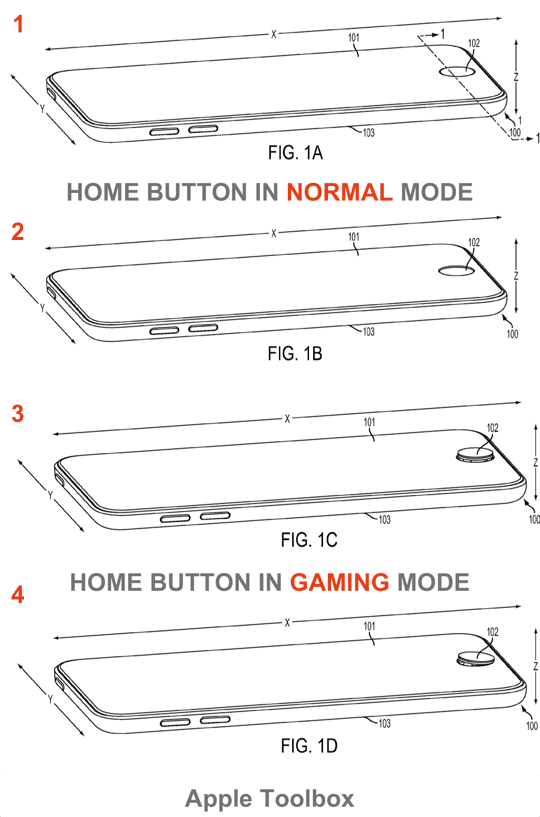 Apple applies for dozens of patent applications every week. Of the most interesting ones recently were an application for a 3D camera and UI patent, and an invention (which was awarded) for flexible electronic devices.

You can read about the most interesting Apple patents every Tuesday and Thursday on Apple Toolbox.