You are here: Home / News / Apple patent for location-based security is granted 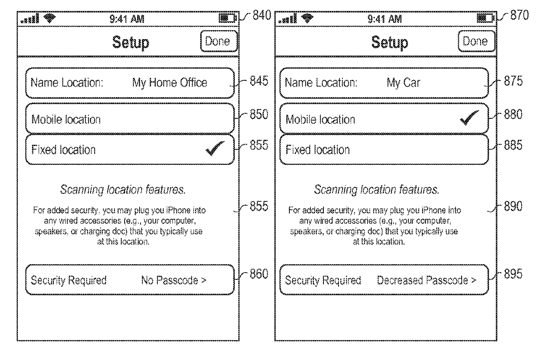 The U.S. Patent and Trademark Office (USPTO) on Tuesday issued a patent to Apple for advanced location-sensitive security mechanisms, in what may be evidence that Apple will implement more intelligent ways for users to lock and unlock their devices.

The patent discovered by Apple Toolbox, entitled “Location-sensitive security levels and setting profiles based on detected location”, describes a method of dynamically changing the level of security that a device enforces based on the user’s location. The device could then use stronger security measures when it detects that a user is in a public space (for example, to require a longer password in order to unlock the phone), but relax the security requirements when in a ‘trusted’ environment – such as within a few feet of their computer at home.

Apple states that factors which may be taken into account to determine a user’s “location aspect” include geographic location coordinates, connected or visible networks and devices, characteristics of devices or networks visible to the mobile device, environmental characteristics of the location, and many more.

As noted by the new Apple patent:

Apple also notes that “frequent authentication requests may cause a user to choose a weak and unsecure passcode (e.g., 1-2-3-4)” and that “a security system that has one security level implemented regardless of location may harm the user experience. For example, the user may be frustrated by being repeatedly prompted for passwords / pass codes when the user finds it unnecessary or burdensome”. The ideas in the patent intend to make security less intrusive and more appropriate based on the user location.

As shown in the example iPhone screens below, when you leave home and want to use your iPhone, you might use the 4-digit password (or Touch ID) but when in the car, you might simply slide to unlock the phone, with no password or fingerprint needed.

Security levels based on nearby devices

Similar concepts have been implemented in Android, whereby a phone can be unlocked automatically when in range of an Android Wear device (such as a smart watch). Apple may be considering implementing these enhanced and more intelligent security measures in its upcoming  Watch in 2015, for example proximity of the watch to an iPhone could reduce the need to lock your mobile – as long as you are wearing the watch.

It’s also likely that Apple may use the invention in its efforts towards smart homes with its new HomeKit framework. Smart devices that talk to each other at home could form part of a “trusted” environment, with less need for security compared to when out in public, for instance. Apple has already applied for patents in relation to smart homes (more details from Apple Toolbox here).

Interestingly, Apple also references a discussion in 2009 on one of the popular Apple forum websites about the idea for a location-based security lock, which perhaps served as inspiration for the invention.

The Apple patent awarded today was filed for in December 2012. Apple credits Alexander Reitter of Sunnyvale CA, David Amm of Morgan Hill CA, Julian Missig of Redwood City CA and Raymond Walsh of San Jose, CA as the inventors of U.S. Patent No. 8,886,217.

You can read our related post about a recent Apple patent application for improved wireless performance here.