Apple was granted a U.S. patent covering a method for producing an interactive three-dimensional holographic image.

As awarded by the U.S. Patent and Trademark Office, Apple’s U.S Patent No. 8,847,919 for “Interactive holographic display device” describes a new type of display screen that produces holographic images. This patent details a method that iPhones, iPads and Macs can “provide a three-dimensional viewing and interacting experience, without the requirement of a reflective medium or wearing 3D glasses, according to disclosed embodiments. Accordingly, a truly unobtrusive interactive three-dimensional holographic display can be provided. ” 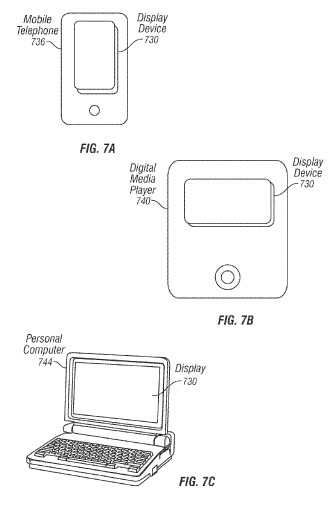 many types of interactive devices are available for performing operations in a computing system. Interactive display screens (e.g., touch screens, in particular) are becoming increasingly popular because of their ease and versatility of operation as well as their declining price. Touch screens generally allow a user to perform various functions by touching (e.g., physical contact or near-field proximity) the touch sensor panel using a finger, stylus or other interactive object at a location dictated by a user interface (UI) being displayed by the display device. Typical touch screens, however, provide a two-dimensional display on a substantially flat surface. Typical interactive devices are incapable of providing an interactive three-dimensional holographic display device. 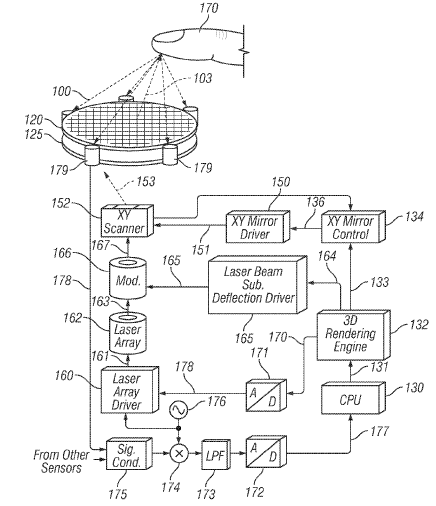 Presently disclosed embodiments are directed to solving issues relating to one or more of the problems presented in the prior art, as well as providing additional features that will become readily apparent by reference to the following detailed description when taken in conjunction with the accompanying drawings.