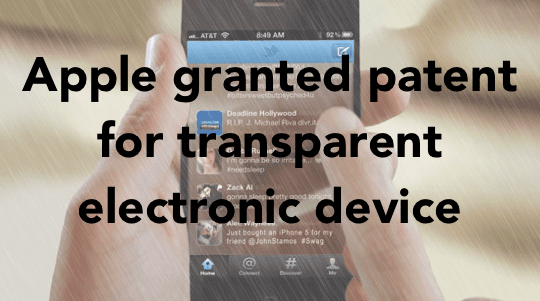 The U.S. Patent and Trademark Office (USPTO) on Tuesday granted Apple a patent for a transparent electronic device. Apple may be seeking to enhance its current product lineup, or use the invention for entirely new product categories, as CEO Tim Cook recently suggested Apple is working on products that “haven’t been rumored about yet”.

How will Apple use its transparent display?

The patent, which was discovered today by Apple Toolbox entitled “TRANSPARENT ELECTRONIC DEVICE”, describes a method for displaying images on a transparent display of an electronic device.

The invention also mentions that a user on one side of the device may be able to see through it to view real-world physical objects on the other side. In part of the description, it’s suggested that two such displays could be used, whereby one of them includes an opaque region and also provides a movable transparent window.

Apple may be looking to incorporate elements of ‘Augmented Reality’ into its displays and devices, in which computer-generated information is overlaid onto the real world. Examples could include real-time road signs and directions shown on a car windscreen, or location-based information that helps smartphone users navigate city streets.

The patent talks in general terms about devices which might incorporate transparent displays, stating that “the device may be a portable electronic device, such as a tablet computer. Other electronic devices may also include a viewable media player, a cellular phone, a personal data organizer, another computer, or the like”. It looks like Apple is keeping its options open for now.

It is possible that Apple has already developed innovative transparent (or semi-transparent) screens in its secretive research labs, and is purely seeking to protect its intellectual property. However, it’s interesting to speculate about future products that may already be in development, especially considering Tim Cook’s recent comments regarding new product categories the company is working on. When the company’s CEO appeared on the Charlie Rose Show in the U.S., he stated “There are products we’re working on that no one knows about. That haven’t been rumored about yet”.

The patent credits Aleksandar Pance of Saratoga, CA as the inventor of U.S. Patent No. 8,890,771.

Recently, Apple was also granted a patent for location-based security profiles. You can read more about that patent on Apple Toolbox here.