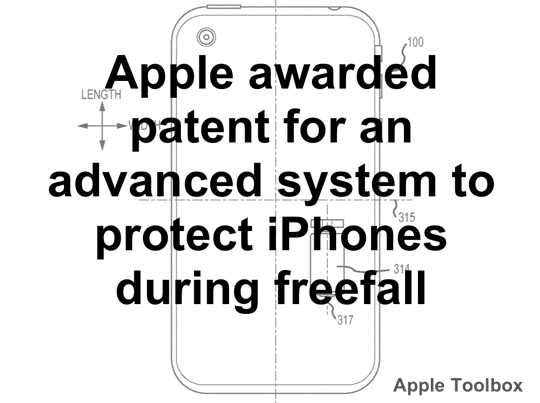 The United States Patent and Trademark Office (USPTO) today awarded a unique patent to Apple for a mechanism by which an iPhone can protect sensitive internal components when dropped.

The patent, entitled “Protective mechanism for an electronic device” was discovered today by Apple Toolbox, and describes methods by which an electronic device such as an iPhone may selectively alter their centre of mass in order to minimise the impact of a fall. Notably, the invention describes novel techniques to “selectively change the orientation of the device via a protective mechanism, depending on the estimated impact area of the device”.

This could be achieved by a special component to alter the phone’s mass, which includes a track connected to the enclosure whereby a weight can be shifted along the length of the track, thus altering the phones centre of gravity. In response to detecting the device is in free-fall, the component’s enclosure can be vibrated ,

Protection system can manipulate an iPhone during free-fall

Another embodiment described contracts buttons, switches and exposed elements inside the phone, to prevent them being damaged and ensuring that the protective outer shell takes the brunt of the impact. Yet more examples include tightening the grip on power and headphone cords in order to slow down the speed of a fall, giving users a chance to catch the device.

How would all this be implemented in an iPhone? The patent describes a combination of sensors such an accelerometer, gyroscopic sensor, distance or position sensors (e.g., radar or ultrasonic), location sensors (GPS and a compass), as well as image sensors (the iPhone camera), and sound and audio sensors (speakers, microphones), all of which may be used in combination.

Whether the futuristic invention ever makes it into an iPhone in one form or another is questionable, but it’s certainly a great concept that could help minimise damage to our fragile smartphones.

Every week, Apple is awarded dozens of innovative patents. You can read more details about one of the most interesting from last week here.