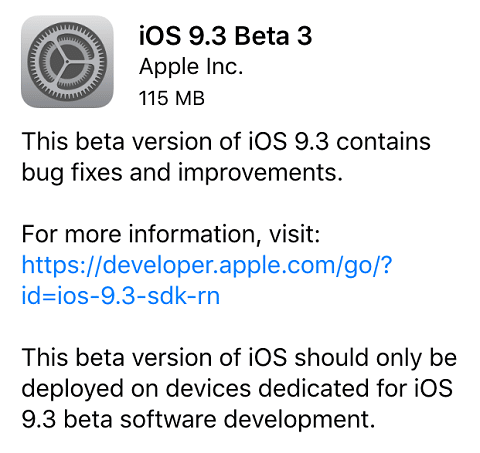 We are starting this Monday off right by getting another beta release from Apple. Today, the company just rolled out iOS 9 beta 3 (build number of 13E5200d) to developers without new features but improvements.

iPhone and iPad users can now download the latest update through OTA update by going to Settings > General > Software Update. You might even receive a notification by now letting you know that there is a new beta update available.

In iOS 9.3 beta Apple introduces a new built-in feature that most of us already know and/or used before called Night Shift Mode. In a nutshell, it’s a night mode feature officially released by Apple for their iPhone, iPod touch, and iPad.

It reduces the amount of blue light by moving your iOS device display to a warmer color spectrum. The options are flexible and you can set whichever time is best for Night Shift mode to be enabled.

So, what is really new in iOS 9.3 Beta 3? Well, nothing except for bug fix for T-Mobile and support for Verizon Wi-Fi calling.

Verizon users that are using their iPhone on the network can now make phone calls over a wireless connection when experiencing poor cellular connectivity. iOS 9.3 beta 3 also fix the T-Mobile bug where it prevent applications from loading over a cellular connection.

That’s it for now, if you see any new features in this update, be sure to let us know. If you are an iOS developer, grab the firmware from Apple Developer Program.