You are here: Home / Reviews / Guide to the new Apple TV

What is the Apple TV? 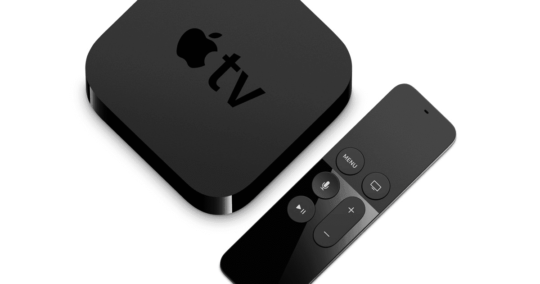 Apple TV is a small (3.9″ x 3.9″ x 1.4″) set-top-box that lets you watch HD movies, television shows, and lots of other video content from many different services like YouTube, as well as download iOS-style apps and games – if you have the newest model.

Apple TV connects to modern televisions via HDMI only (cable not included) and includes a revamped “Siri Remote” that uses Bluetooth 4.0 and also has an accelerometer and gyroscope, dual microphones for Siri, a Lightning connector for charging, and a smooth touch surface.

You can view the full technical specs of the latest model on the Apple TV tech specs site.

Apple TV started out as something of a “hobby” project for Apple, with early versions only giving basic access to iTunes content. Consumers and experts criticized those devices for missing some of the features found on competing and sometimes cheaper devices like the Roku 2.

For at least two years, Apple TV owners have been patiently waiting for an updated model to address the shortcomings of the third-generation version (still available for $69.99), hoping that Apple would take a real interest in TV and dedicate sufficient resources and marketing to a new, more powerful and flexible device. 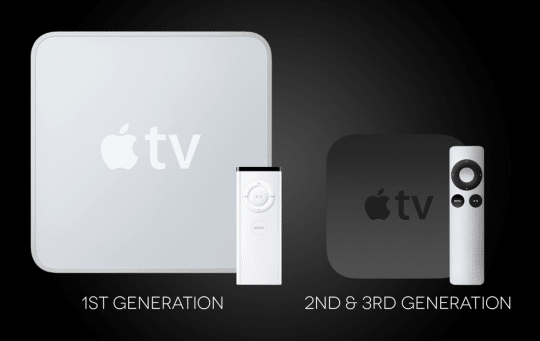 Thankfully, in late 2015 Apple finally announced the new Apple TV in two storage size capacities (32 GB and 64 GB.) These models feature a totally revamped user interface, a slightly tweaked outer case (being taller than the outgoing model, although mostly unchanged in appearance.) And best of all, the new Apple TV has a much better remote with Siri voice input (via a dedicated remote control button), plus adoption of the “A8” CPU that found in the iPhone 6 and 6 Plus. Apple also added a dedicated App Store, meaning that users of the latest model can download apps, expanding the device’s usefulness and turning it into a fantastic entertainment system for your home.

As a long-time Apple TV user, I was delighted when Apple announced the 4th-generation model in the fall of 2015. Apple showcased two versions, one with 32 GB of storage and the other with 64 GB, though they are completely identical in all other respects.

As far as the hardware is concerned, even though the latest model looks almost identical to the outgoing one, it is the updated internals and more modern user interface that have revolutionized what the Apple TV is capable of. As Apple CEO Tim Cook said in last September’s keynote speech, the future of television is apps, and in that regard, the Apple TV delivers with a decent number of apps across a broad range of categories. Want to couch-shop or find an apartment? There’s an app for that… 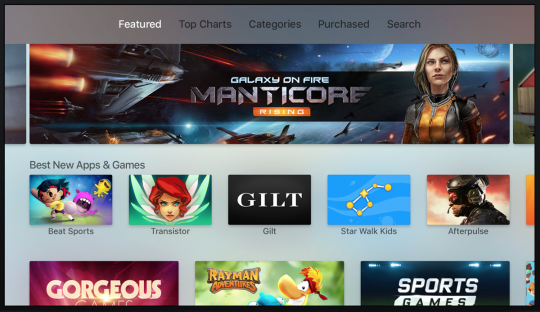 Regarding its physical appearance, Apple TV has a fairly sleek (and unassuming) exterior with shiny black sides and a matte top that features the “TV” logo. The box itself doesn’t stand out and is plain enough to fit nicely into any home setup. About the size of a hockey puck, it’s not something that you’re going to look at much, but the build quality is high.

Here’s a quick look at the ports on the back of Apple TV. Note the USB-C socket is for diagnostics purposes only and currently doesn’t accept any peripherals or add-ons. If you’d rather connect with an Ethernet cable instead of Wi-Fi, there’s also a socket on the back. 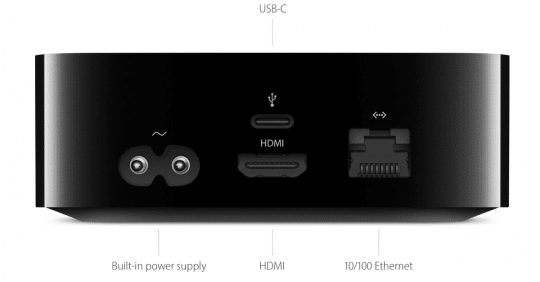 Using Apple TV requires that you learn how to use the new remote control. Gone is the old ‘click-style’ silver one and instead it has a glass touch-sensitive “trackpad” along the top that also has a clicker, which is simple to use and very responsive (you change sensitivity in Settings.) Plus, there’s dedicated buttons for Siri, volume up and down, pause/play, Menu, and a Home button, which also lets you put Apple TV to sleep with a long press. The remote also turns on / off your television and control the volume thanks to something called HDMI-CEC, most modern TV’s support that standard.

I found the remote control easy to use, and also surprisingly responsive and user-friendly for particular types of games (such as SkyForce Anniversary), although you can also connect Bluetooth “Made for iPhone” game controllers, such as the excellent SteelSeries Nimbus.

There are a few tricks to using the remote. For example, a double-tap on the Home button shows open apps, and swipe up can be used to kill an app just like on iOS. You can also long-click on the left side of the trackpad to scrub backward through a video, or long-click the right side to fast forward. That wasn’t immediately obvious, but you can also scrub through video just by swiping left or right on the trackpad and then continuing to swipe one way or another.

One of the curious omissions on the new Apple TV is the optical audio output. Fortunately, it is also possible to connect Bluetooth speakers – in my case the Hamon Kardon Nova Wireless, which quickly fills the room with a deep and crisp sound, and you can set these as the default speakers instead of the television.

Apple TV also runs a new operating system called tvOS, which brings many of the same features and functionality as iOS. For example, support for all kinds of sprite and graphics rendering. The interface itself is a joy to use, especially compared to the old model, and there’s a cool type of parallax effect on icons and pictures as you move your finger over the remote’s touch surface. That doesn’t add much to the viewing experience, but it makes the whole experience look and feel modern and fresh. 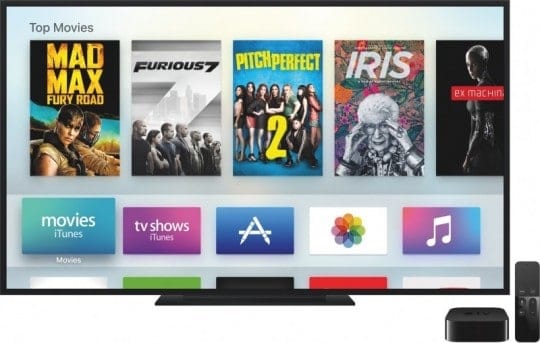 I must give special mention to Apple’s built-in slow-motion screensavers, which feature incredible flybys of stunning, scenic locations such as the Golden Gate bridge. New screensavers can be downloaded automatically and adjusted in Settings.

As for Siri, the two microphones on the remote seem to do quite a good job at picking up my voice when held at arm’s length, however in a sometimes-noisy room with air-con and a fan turned on it’s necessary to hold the remote closer to your mouth. 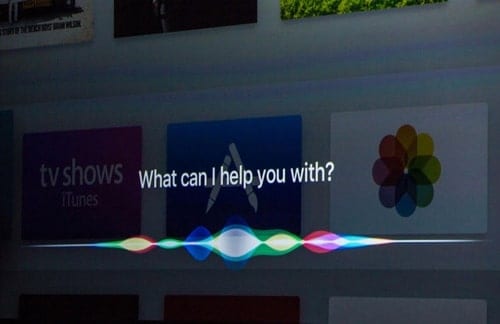 Finding content using Siri is quick and effective and works nearly all the time in my experience: “Play the latest episode of the Walking Dead” nails it every time for example, and a quick “What did he say?” will skip back 30 seconds and temporarily enable subtitles. You can also just say things like “Go back 1 minute, “ and Siri obliges.

Some of the countries where Apple TV is available don’t yet support Siri, but presumably, Apple will enable Siri over time in more regions.

How does Apple TV work?

Setup of Apple TV is a doddle if you have an iOS device to hand such as an iPhone. When prompted, just wave your iPhone near the Apple TV to copy over settings such as your Wi-Fi password and your Apple ID. 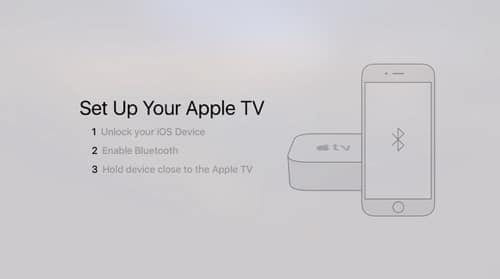 Once it’s all setup and running, you’ll have access to iTunes content and a growing selection of apps. You can also use the iOS Remote app to control Apple TV – something which is particularly useful for inputting text fields and passwords, as the default method of entering text is somewhat difficult.

Most of the content available via Apple can be downloaded or streamed. In fact, it’s not true streaming (as it is on Netflix) – rather more of a progressive download. If you’re on a relatively fast Internet connection, most content should start to play a few seconds after hitting Play, but those people with slow Internet may have to wait while content is buffered up first.

Any content purchased in your iTunes library (such as TV shows and movies) should automatically show up, and you can also access Apple Music if you’re a subscriber via the top-level menus. Apple TV also lets you browse iTunes content on computers connected to your home network, as long as Home Sharing is turned on.

Is Apple TV for me?

While some users have bemoaned the lack of “4K” support, due to the lack of suitable hi-res content, it’s currently not an issue for the vast majority of viewers. Granted, some services like Netflix are beginning to offer 4K content, and the television sets are becoming more affordable. However, we expect that Apple will eventually add 4K support to a future version, as more movies and TV shows adopt the format. 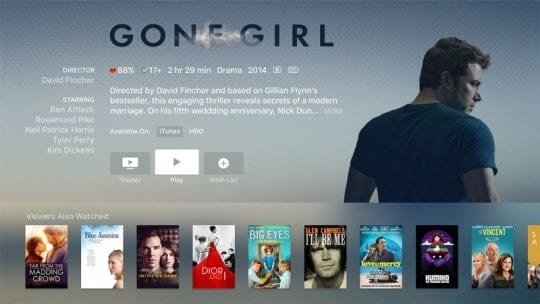 If you own a couple of Apple devices, the Apple TV is also a good way of accessing your existing Apple content from the comfort of your couch. While the competition (Roku, Amazon Fire TV, etc. ) might have some of the missing features, on the whole, it’s a very capable streaming box that will more than suffice for people that don’t mind paying for content. You can even download the Netflix app and watch subscription based content, though there’s no Amazon Prime Video app yet.

Which model should I buy?

If you are considering buying an Apple TV, you’ve essentially got two choices:

If you’re happy with basic iTunes content and the occasional YouTube video for example and don’t care about playing games or using other apps, the old model will more than suffice (or as a second bedroom viewing device it’s also ideal). 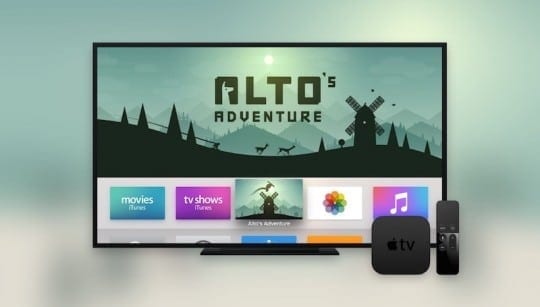 However, the new Apple TV is a much more capable, powerful, and flexible device. There is a much broader range of content available thanks to the thousands of apps, with much more being added daily. The user’s interface is also more intuitive, and the voice-controlled Siri search is a genuinely useful way to find a contact or look up who stars in a movie, for instance.

Furthermore, only the new Apple TV allows you to access your Apple Music subscription (albeit with a rather limited user interface), so if you’re a music fan, then the new model is the only way to go. Bear in mind that if you’re a heavy app user, the logical choice is the 64 GB model, but for most people, the 32 GB version will more than suffice. Apple limits Apps in size (a stipulation Apple has enforced on developers) so you really will need a lot of apps before filling up even the 32 GB model.

The new Apple TV is a significant update to Apple’s set-top-box, and it was long overdue. Packed with new features and full of potential (most of which is as-yet untapped) for apps and casual games, it’s a worthwhile purchase for most people.

While not as cheap as the competition either and also lacking in a few areas (like 4K support), Apple TV does pretty much what you expect while improving on the old model in every way possible.