Last week, Apple held its fourth and final keynote of the year, the ‘One More Thing’ event. If you tuned into this event, then you probably saw that Apple announced three new updates to the Mac lineup.

Before these announcements, however, Apple spent the first fifteen minutes talking about something called the “M1 chip”. If you’ve been paying attention to Apple’s events from earlier this year and are a hardware nerd in general, then this was no doubt an exciting and anticipated announcement.

If you’re like the rest of us, however, this might’ve easily gone over your head. After all, even the most dedicated Apple fans might not know what a transistor is or how a 16-core neural engine affects their daily laptop usage.

In this post, I’ll cover (and explain) everything that makes the M1 so exciting for the future of Mac and why it might be the best time in a long time to become a Mac user.

Let’s get into it.

What is the M1 chip?

The M1 chip is what’s known as a “System on a Chip”, or “SoC”. That may sound like a vague title, but it’s pretty simple. It’s the piece of your computer that does all of your computing. 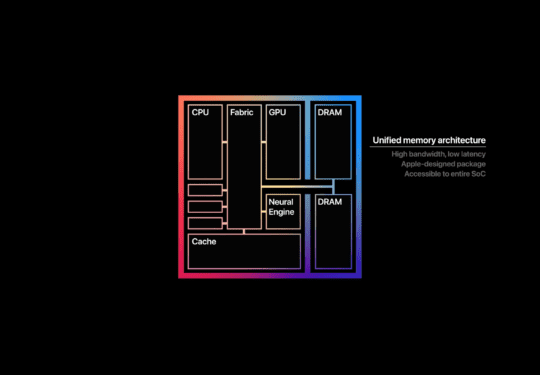 Your computer has a keyboard, mouse, battery, fan, screen, and storage, but none of these things do any computing, just like your hands don’t have any thoughts. The SoC, on the other hand, does nothing but computing. It’s the brain of your computer. The better your SoC, the higher your computer’s figurative IQ.

I feel like I’m running this metaphor into the ground a bit, but hopefully that makes sense!

Why does the M1 chip matter?

So, to get more specific, the M1 chip is Apple’s newest SoC, only available in its newest computers. In the past, Apple had been using Intel chips (you can read more about this here). But it has been clear for some time now that Apple was wanting to make its own chips for its Macs (the iPhone and iPad have been using Apple-made chips for years).

That makes the M1 Apple’s first in-house SoC in several decades. That’s a big deal. Imagine if Chevrolet had been using Ford engines in its vehicles, and then suddenly announced a new Camaro with the first Chevy engine in decades. It would dramatically change what it meant to own a Camaro as well as create lots of buzz about the future of Chevrolet vehicles.

This is why the M1 chip is so exciting, and it’s why you will probably be hearing about it and its ancestors for a long time to come.

So what makes the M1 chip so special?

Aside from the fact that it’s the first of its kind, what is it that makes the M1 chip better than Intel’s chips? And how will this impact Macs that have M1 chips in them?

Luckily, Apple dedicated a lot of time to explain the engineering of the M1 chip at its ‘One More Thing’ event, so we have some pretty good insight into what makes this thing so cool.

First, the M1 chip has 16 billion transistors. According to Apple, this is the most they’ve ever put into any chip.

What are transistors? Most of us know that computers work by speaking in ones and zeroes. This makes up the “computer language” and allows them to accomplish tasks.

It might not have occurred to you, however, that those ones and zeroes are stored on hardware – they aren’t an abstract, digital concept. Your computer stores and processes data as physical ones and zeroes.

Having 16 billion of these things working in tandem not only speeds up every aspect of your computer but also increases the power and capability of your machine.

In short, this is a massive leap in power for Mac.

As it turns out, it did both. Apple created an 8-core processor for the M1 chip, which consists of four high-performance cores and four high-efficiency cores. During usage, the M1 chip will intelligently route tasks between these different cores.

For instance, light computer tasks (such as browsing and streaming) will likely be run on the high-efficiency cores, extending your battery life and reducing your power consumption. For more intensive tasks (like gaming or video editing) the M1 chip will likely switch to the high-performance cores, speeding these up significantly.

Additionally, the M1 chip comes with a new 8-core GPU. That’s a massive upgrade, especially for machines that are known for being poor performers in the games and 3D rendering market.

Mac has always struggled in this department, largely because it isn’t what Macs are built for (gaming isn’t a target demographic for Apple’s computers). It looks like Apple is trying to change this with the M1. I’m personally skeptical of the M1’s performance for PC gaming but am certainly curious to see if the Mac has the potential to be a decent gaming computer in the future.

Lastly, Apple added a 16-core neural engine to the M1 chip. At first glance, this might sound like the most impressive change. After all, 16-cores is a lot, and “neural engine” is pretty futuristic sounding.

In reality, this is probably the least significant improvement with the M1 chip, even though it’s still commendable. For those who don’t know, neural engines are what power machine learning. It’s part of what powers Siri and allows your Mac to make predictions for you (e.g., when you open Reminders and see a suggestion based on a text you just sent, that’s machine learning).

In terms of scalability, machine learning will likely become one of the most important aspects of your computer in the future. Today, though, it just means you’ll have a more useful and powerful Siri. And if you’re a developer, more ML power is always a plus.

What the M1 means for the future of Mac

By now, we’ve covered what the M1 is and everything that makes it such an exciting piece of hardware. Building on this, let’s get into some of the key ways this is likely to improve the Mac lineup.

It’s no shock to anyone that Macs running on the M1 SoC are substantially more powerful than their Intel predecessors. As Apple said at the beginning of its keynote, this takes the Mac into a completely different class of performance. 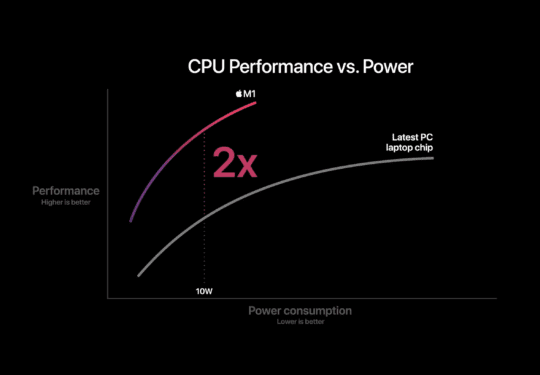 What is likely to shock you, however, is just how much more powerful these computers are.

Before Apple announced the new M1 MacBooks, the most powerful MacBook was the MacBook Pro 16″. This thing easily outperforms the average computer is one of the most respected powerhouses in its class.

The MacBook Air, on the other hand, has traditionally been Apple’s least powerful notebook, serving as a budget option for college students and casual users.

Another unsurprising improvement is that the battery life on MacBook just got much better. However, Apple again managed to catch everyone off guard with how dramatic the improvement ended up being.

Both of the new M1 MacBooks now get more battery life in a day than most of us stay awake. And, particularly exciting, the M1 MacBook Pro gets up to 20 hours of battery life according to Apple. You could leave home without a charger and still get a full day’s worth of work done.

Last but not least, the announcement of the M1 chip means we’re likely to get far more exciting Mac updates in the future. For a few years now, it’s felt as if the Mac has been its most neglected lineup, receiving rare and minimal updates.

The M1 is not only the biggest Mac announcement in several years, but it’s also an indicator that Apple has big plans for the Mac moving forward. After all, the M1 is just the first of its kind. There will be an M2 soon enough, and an M3 after that.

I look forward to seeing where Apple takes the Mac lineup, as it is, in my opinion, the heart of Apple’s innovation and passion.