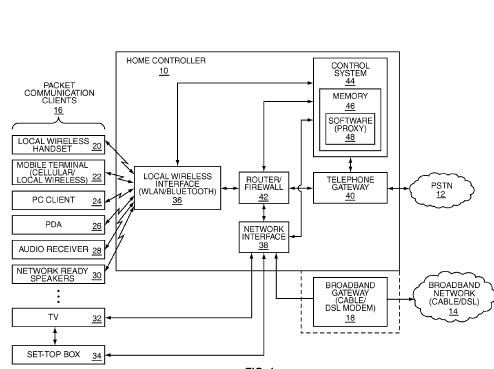 According to a recent rumor, Apple is working on smart home features for its iOS devices. Apple reportedly will unveil this at the Worldwide Developer Conference on June 2nd. In line with this rumor, Apple’s new patent application titled “integrated home service network” describes a system, referred to as a ‘home controller’, to facilitate the integration of multiple consumer electronics devices.

According to the patent application:

Apple’s new home controller will use wired connections and wireless (via bluetooth or WLAN) connections to connect with and control other devices. The patent further describes:

The home controller may include a Public Switched Telephone Network (PSTN) interface to support circuit-switched telephony including traditional telephone calls, as well as wired or wireless packet interfaces for communications with the associated packet communication clients and remote devices through broadband network connections. As such, the home controller may emulate a base station for a cordless telephone, wherein one or more of the electronic devices may act as a corresponding telephone handset. The home controller would be able to facilitate wireless communications with the handset to support telephony calls established over the PSTN or via the broadband interface.

The patent document also includes figures to explain its functions. One of the figures (see below) is an exemplary home controller. This figure illustrates that the home controller will have access to multiple means of communications enabling it interact with the packet communication clients through wired or wireless techniques. Exemplary packet communication clients include, but are not limited to, a local wireless handset; a mobile terminal, a PC client, a personal digital assistant (PDA); an audio receiver; network ready speakers; a television (TV) or video display device; and a set-top box. Home controller may also have additional features enabling it to operate as an answering machine, video recorder, email client etc. 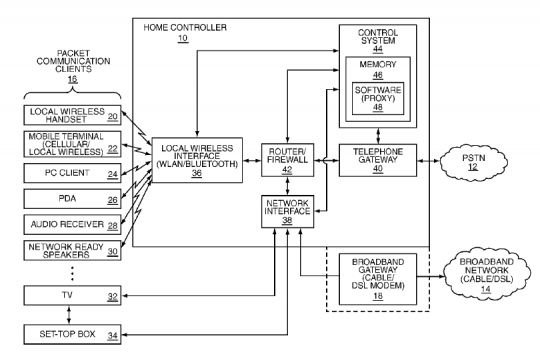 Apple’s integrated home service network patent was first filed for in November 19, 20013 and credits Christie, IV and Samuel H as its inventor.

You may access the full text of the patent here.