We are but servants of our habits. Once you develop the habit of using Siri, not having her around can be painful. This is particularly important for folks that use Siri to set reminders and use voice control queries to track information and news on a regular basis. Siri related Problems have been reported by multiple users especially after the Ios 9 upgrade. Majority of the time, these problems usually go away with a quick reset of the device, however there are often situations when we have tried everything and we are still stuck with the problems of not having Siri.

In this article, we will cover some of the basics around troubleshooting Siri. The article is centered around user submitted tips and some of the common things to check in the case of Siri Problems.

Do you have a Siri Compliant Device?

The first aspect of troubleshooting is to make sure that Siri is in fact compliant with your iDevice. Not all Ios devices work with Siri. A common misconception is that if you upgrade/update your Ios device to the latest Ios version, it will allow you to use all the features that were not available previously. Unfortunately, some of the features are hardware dependent. For example you will not be able to use Siri voice features with an older iPad 2. The devices that will support Siri are iPhone 4s or later, iPad Pro, iPad Air or later, iPad 3rd Gen or later, iPad mini or later, ipad touch 5th generation. Macs do not support Siri.

Is the Siri Feature supported in your Region?

Now if you have the Siri compliant device, the next step is to make sure that your region supports the appropriate Siri application and the features. Some aspects of Siri such as making restaurant reservations or finding out restaurant reviews are limited to specific regions and are not universally available. The same limitation applies to Movie reviews and Movie showtimes. This feature is only supported in the following countries: Australia, Canada, UK and USA.

Tip – 1 Basic Settings on your Device

Step – 1. The First of the Settings is to make sure that Siri is Turned on in your device settings.

Go to Settings > General > Siri and make sure it is turned ON. If you are in Settings > General and you do not see the Siri option, this means that you have at some point in the past Restricted your Siri in Restriction Settings. Please go to step 2 and remove the restrictions before you can turn on the Siri Settings on this step. 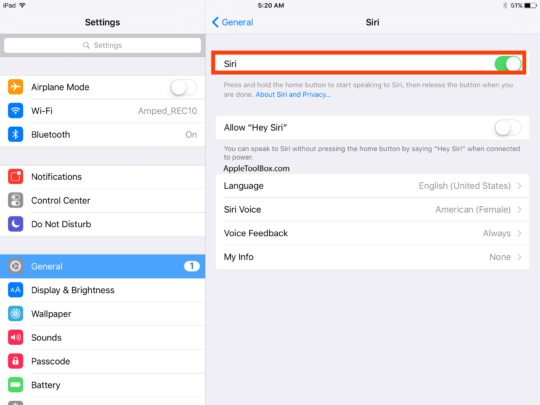 Step – 2. Please make sure that you don’t have restrictions on for Siri by going to 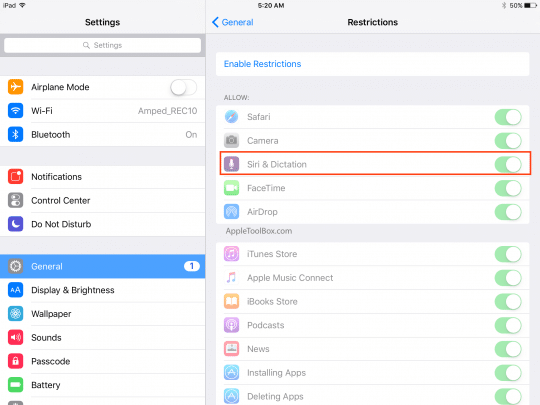 Step – 3. Restart your iDevice and check if Siri is working.

At this point, you have made sure that all the settings described above are in place but you are still not able to use Siri on your idevice. In this step, we want to make sure that hardware related problems with your microphone are not the main issue. This step is intended to rule out mic related problems.

Step – 1. If your phone has a protective cover, remove it for this step.

Step – 3. To test the primary microphone on the bottom of your iPhone, open Voice Memos and tap the record icon. Then speak into the microphone and tap the play icon to play back the recording. You should be able to hear your voice clearly.

Step – 4. If you are using an ipad instead of iphone, record a video using the Camera app, then play back the recording. You can also use FaceTime to make a video or audio call to test the sound quality.

Step – 5. The other way to confirm the Mic’s condition is to use your device with Siri in your Car. If Siri is able to work with your car’s microphones, then you know that you are definitely having a problem with your mic assembly on your idevice.

We suggest that you get a can of compressed air and use it to blow in the mic area as well as the headphone jack area in order to get rid of any debris or particles that may have been causing issues.

If your device is not experiencing any hardware related issues as highlighted in the above steps, the next option is to focus on some of the setting steps that have worked for other users. Please note that these are user submitted tips and may work for some and may not for others. Since these do not require a major reset, we strongly suggest that you give them a try.

Step -1. Turn OFF Siri by going to Settings > General > Siri.

Step -2. Press and Hold Power Button and Home Button together till you see the Apple Logo appear.

Step -3. Once your device reboots, Please go to Settings > General > Siri and turn it ON

Step -4. Check to see if Siri is working on your device now.

This is a user submitted tip. Has not worked for most people but some have had success. Easy to attempt without any significant risks.

Step – 1. Switch off your Wi-Fi Assist feature on your device.

Step – 2. Toggle Dictation ON and OFF by going to Settings

Start Siri and check to see if it works.

Tip- 5 Switch the Siri Edition to make it work

Some users have reported that if you switch the setting of the Siri voice to use British English as opposed to US or Australian, it seems to be working. Doesn’t solve the problem but is a work around if it works for you. In order to switch the Siri Voice, Go to Settings >General >Siri>Language and choose English United Kingdom. 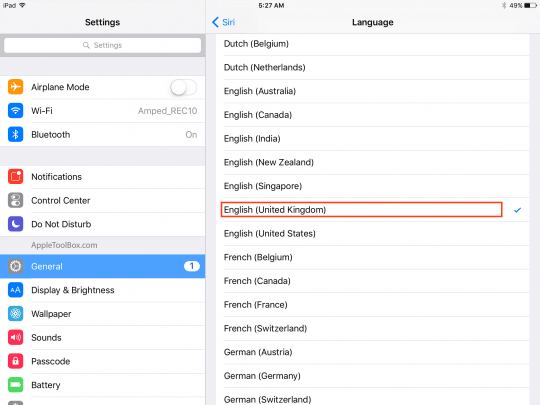 If none of the above steps made a difference for you, you may have to visit your closest Apple Store and have them take a look at your device.

Question – I’m able to open Siri on my iphone but the language is not correct. How can I correct it?

Answer – If Siri is working but is not speaking in a language that you understand, you can change it back to English by going to Settings> General> Siri> language> English

Unfortunately, this is a problem that is being experienced by numerous users. We are hoping that Apple will be able to fix the bug in the upcoming software releases. In the mean time, if you have discovered a new tip/trick to make Siri listen and work with you, please shoot us a note or share it on the comments.