Welcome back to my monthly series where I bring you the best iOS apps and the best macOS apps currently available.

If you’re new here, this is a series where I try to bring to you the latest and greatest ideas on the App Store. Unlike other lists, which either list sponsored options or rehash trending apps that everyone’s already used, I do my best to seek out weird, unique, and indie apps that you almost certainly haven’t seen before.

If you’ve read posts in this series before, make sure you caught the previous post for March 2021.

One last thing – I’ve numbered the apps below just to make reading easier. None of these apps are being ranked against one another, so don’t let that factor into whether or not you download any of these apps.

First up on our list of the best iOS apps is a fun one – Really Bad Chess. Last December, I promoted an app called Good Sudoku by the developer Zach Gage. It was and still is my favorite sudoku app – Zach just knows how to make great mobile games! 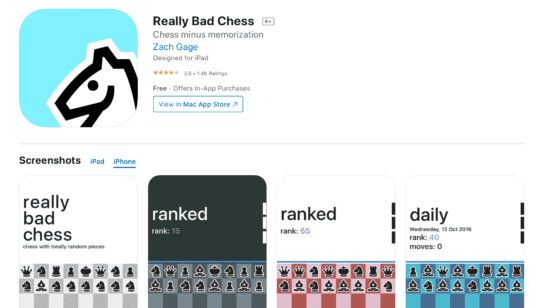 Really Bad Chess is another app from Zach Gage that takes far more liberties with the source material.

The premise is ingenious: Every time you start a new game of chess, you and your opponent get a random assortment of chess pieces. You could have five knights, two queens, and all pawns while going against an opponent of all rooks. The only thing that stays the same between boards is that you always have just one king.

If you’re completely new to chess, this serves as an excellent way to dive into the game. Since everyone is handed random pieces, traditional chess strategies don’t work. So new players have a chance at winning after just a little bit of practice.

And if you’re a chess veteran, Really Bad Chess is a fresh take on a game that has had very little changes for hundreds of years. Check it out!

Next up is a much more serious (but incredibly important) app that I’m very happy to be sharing with you. In essence, Calm Harm is a companion app for people struggling with self-harm. 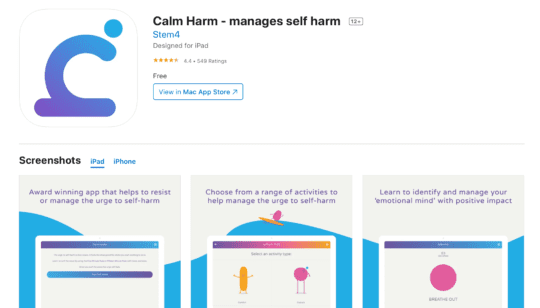 It was created for the teen mental health charity organization Stem4 by Dr. Krause. And, importantly, Calm Harm uses evidence-based principles from Dialectic Behavior Therapy. So this isn’t your typical mental health app.

Calm Harm is meant to be used during a crisis. In a situation where someone would use a self-harm coping technique out of habit, they instead open Calm Harm. Once opened, the app will give the user four categories to choose from:

Each category is packed with tasks for the user to complete ranging from five minutes to fifteen. The user then stays in the app, completing various tasks, until the urge to self-harm has passed. Everything is password protected and completely private.

If you or someone you know struggles with self-harm, Calm Harm can be a life-changing app. It’s definitely earned a spot as one of the best iOS apps on the App Store.

3. Heart Reports: Turn your Apple Health data into records for your physician

And, odd as it may seem, the developer realized they couldn’t. Natively, the Health app on iPhone and Apple Watch doesn’t offer a way to cleanly export your data. Apple has added export features to Health and technically allows doctors to integrate their systems with the Health app, but none of this is really in use, and the file exported by the Health app is large, technical, and not very readable. 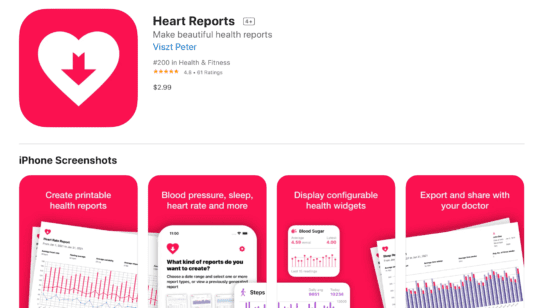 That’s where Heart Reports comes in. Using the same tools that Apple has tried to get doctors and hospitals to use, Heart Reports turns all of your Health app data from iPhone and Apple Watch into a neatly readable set of documents. You can then print these out or email them to your physician.

The app is only $2.99 and doesn’t collect any data from users. So it’s private and safe to use. Download it today and bring your results to your next doctor’s appointment.

4. Clicka!: The most pointless and addicting game on iPhone

Last up on this month’s best iOS apps is Clicka! You may think this is one of the worst apps I’ve ever shared, and you’re entitled to that opinion. But I’ve had this on my iPhone for a bit now and have been fascinated by how simple it is. 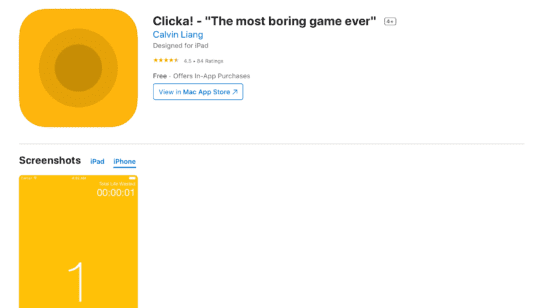 Clicka! is super straightforward. When you open it, you get an image of a yellow screen with the number 0. Tap the screen, and that 0 becomes a 1. Tap it again to get a 2, then 3, and so on. Your number is saved even when you close the app, so you can keep building up your number for as long as you like.

And that’s it. Clicka! does have a global leaderboard, so you can start competing with others and, maybe one day, have more taps on Clicka! than anyone else in the world. There’s also a timer in the top-right telling you how much time you’ve wasted – I won’t tell you what mine says…

1. CursorSense: Make your Mac’s cursor feel “right” on every device

When I first switched to a MacBook from Windows in 2018, I was super impressed with the trackpad, as most people are. But, of course, the trackpad is only good for basic mousing around. When you need to drag and drop and swap between multiple displays, draw, etc., a mouse is going to be needed.

To my dismay, I found that adding a mouse to my MacBook resulted in an awkward performance. I tried a Logitech mouse first, and could not get it to feel “right”. I still can’t explain exactly what was off, but everything about the movement of the cursor was unnatural.

Things got a bit better when I switched to Apple’s Magic Mouse a few months later, though the movement was still very different from how Windows mouse movements feel (which I still prefer).

Fortunately, I’ve recently found an app designed to fix this ambiguous and hard-to-describe problem: CursorSense. CursorSense is an app that gives you more control over the movement of your mouse on Mac. It adds settings like sensitivity and, because it’s a third-party app, it works better with third-party mouses. 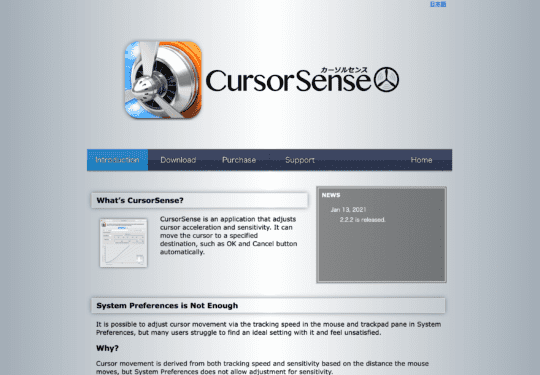 Additionally, CursorSense adds features like automatically moving your mouse to the “Ok” button of a popup, providing you with customized settings for your trackpad, Magic Mouse, and third-party mouse, settings for designers vs. gamers, and more.

It’s $10, which is a bit steep, but it’s something you’ll only ever buy once and that you’ll use forever. It offers a free 20-day trial, so definitely try it out if you’ve had issues with Apple’s default cursor settings.

Can the value of a good calculator be overstated? I don’t think so. And I don’t think it’s a stretch to say that the default Calculator on Mac (and even on iOS) is pretty lackluster. It doesn’t do anything that a cheap calculator from the grocery store can’t do. You can have multiple windows of the Calculator app open, you can’t use NLP, and you can easily view the formulas and calculation history that you’re creating. 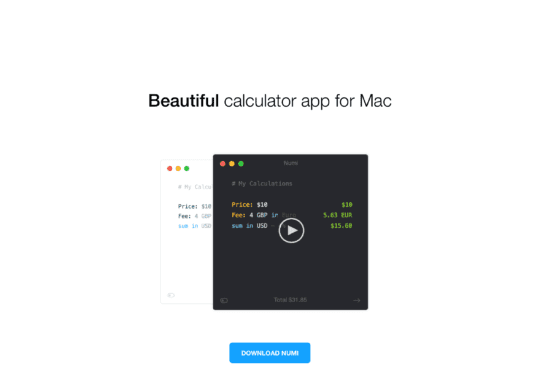 Numi solves all of these problems and also provides you with an incredibly versatile calculator. It’s a bit hard to explain what’s so great about it, so I recommend following this link and watching the short video on the front of the website to get a feel for how it works. Here’s a screenshot as well for those who don’t want to click the link: 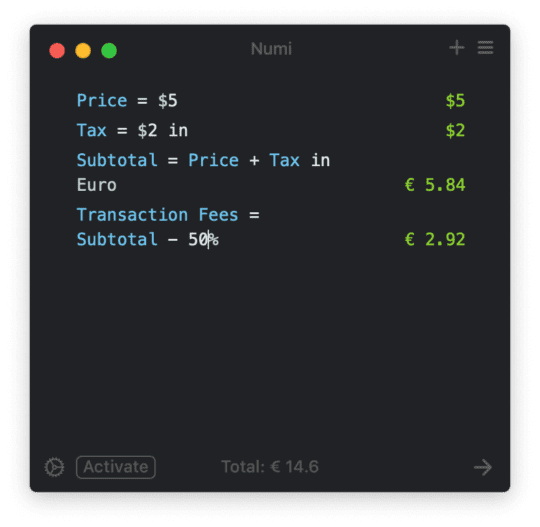 As you can see, Numi allows you to perform calculations just by typing out what you want to calculate. It also makes things like currency conversions and variables easy to use.

Just as important as this, though, is that Numi makes it easy to view your calculation history. You can read your calculations just as easily as you wrote them, so you never lose your place, forget an important number or any of the other annoying things that happen when using a basic calculator. To get the hang of Numi, be sure to skim through the documentation on Github.

It’s worth mentioning that Numi offers a $20 license to unlock all of its features, though the free version works pretty well on its own. And you won’t be nagged about upgrading, which is always a nice perk. This is one of the best macOS apps that everyone should have on their Mac’s dock!

3. Keka: A basic archival tool for every user and format

For most users, archiving files into various formats isn’t something that comes up very often. When you need to archive or unarchive something, though, the last thing you want is to try and find a safe way to do it. macOS offers some basic archiving and extraction features, but just like on Windows, you’ll probably want to find something more robust online. 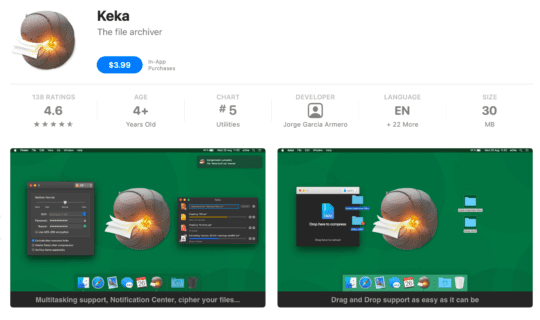 Keka is an app that solves all of your archiving needs in an easy-to-use package. Perfect for those who don’t know what they’re doing (me) and those who like convenience when archiving.

There isn’t much else to say about Keka! It has a great interface, is just a few bucks (or free on Keka’s website), and can export to and extract from nearly every archival format out there.

4. Optimage: Easily cut down on storage without losing image quality

Lastly, we have another utility app that I use all the time. Optimage is an app that shrinks large image files into smaller files without compromising the quality of your photo. This is done by some algorithmic-compression-ratio magic. 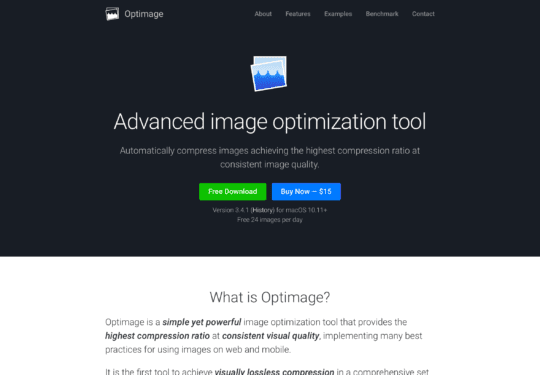 By using this app, I’ve saved several gigabytes over the years. Super important if you’re a website owner who pays for server storage, a data archiver, or an artist looking to save some space on your Mac.

This app is free if you only optimize 24 photos per day, forever. If you want to compress unlimited photos, it’s just $15 to upgrade.

And that brings us to the end of this month’s best iOS apps and macOS apps! As always, these are some of my favorite apps (Numi, Heart Reports, and Calm Harm are particularly great). I hope you enjoy them as much as I do, and I’ll see you next month with more great app suggestions.

Until then, keep reading the blog here at AppleToolBox for everything Apple. And don’t miss the Apple Event on April 20th or our coverage over it!