You are here: Home / Reviews / A Brief History of the Apple Store, and Where it is Heading in the Future 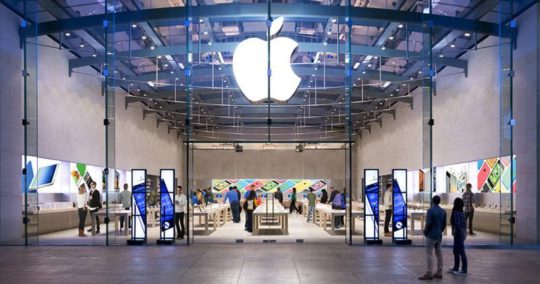 In 1997, Apple finally caught a break. Steve Jobs was coming back, just when the company was on the break of bankruptcy. Michael Dell, the founder of Dell Computers, had an interview.

Dell was asked what he would do in Jobs position. His response? “I’d shut it down and give the money back to the shareholders.” This did not make Jobs happy. 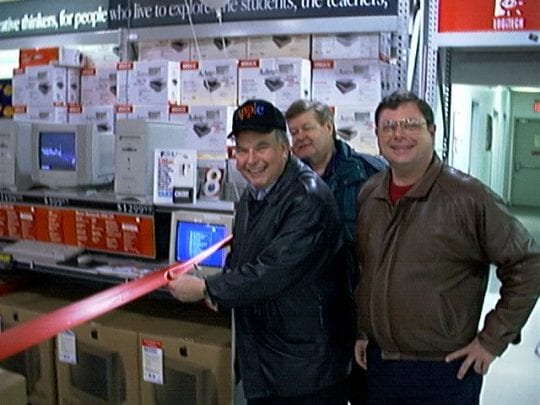 Dell’s quote angered Jobs on multiple levels. NExT, the company Jobs founded after leaving Apple, and that had just been acquired, had created Dell’s online shopping experience, which was quickly taking over their retails presence. Jobs ordered a team to make an online store “that was better in every way than Dell’s.” On November 10, 1997, he announced the Apple Online Store. He also added: “I guess what we want to tell you, Michael, is that with our new products and our new store and our new build-to-order manufacturing, we’re coming after you, buddy.”

Before Jobs returned to Apple in 1997, and even after the launch of its’ online store, Apple sold most if its computers through third-party partners and big box stores. This lead to a clear problem. These stores had poorly trained sales associates, in a store with a hundred Windows machines and two Macs. They were rarely skilled in using Macs and would give favor to Windows machines. These stores would even often make PC’s in-house, for significantly less to the buyer but a much higher profit. 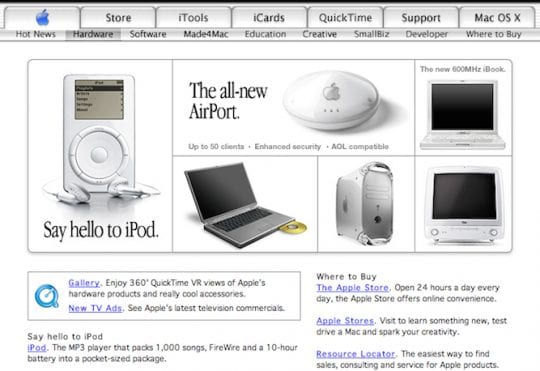 In 1998, Tim Cook joined Apple as the Senior Vice President of Worldwide Operations, where he immediately expressed some of these concerns. Soon after, Jobs had him sever ties with over half of its 20,000 retail partners, including all big-box stores. Jobs instructed Cook that the goal was to target Dell and to match and exceed their inventories and supply chain.

Jobs began to look into the idea of a standalone store. He had 34 ‘store within a store’ tests in Japan. Jobs decided to push for these stores with retail partners, with CompUSA being one of the only to follow through. They agreed to set up at least 15% of their store with an ‘Apple Store,’ as well as higher a part-time Apple representative. The experiment seemed to fail, with CompUSA’s President being removed a year later partially due to his support of the project. Despite this, Mac sales were up in CompUSA, and Jobs made a new deal with Best Buy. 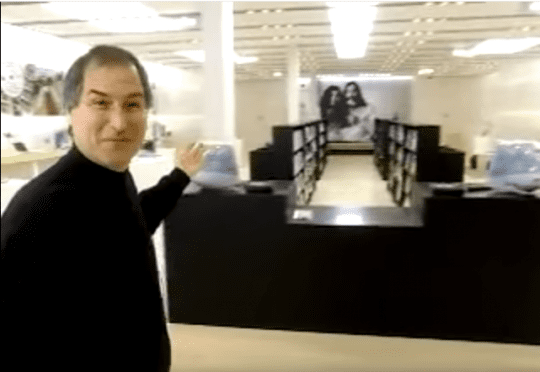 Jobs realized all of this wasn’t working. Apple’s whole product was about an ecosystem, and he realized that the company needed the ecosystem to begin at the store, not once you get home, to sell machines. So, he decided to look into making an Apple Store.

In 1999, Jobs got Milliard Drexler, the former CEO of Gap, to join Apple’s board, follow soon after by Ron Johnson, the CEO of Target, to head the retail operations. Jobs began hiring architects and design teams to build Apple Stores in warehouses near Apple’s headquarters.

In May 2001, Apple opened its first two retail stores. The first located in Fairfax County, Virginia, and the second in Glendale, California.

Press and Industry experts thought the idea was destined for failure. However, the first stores were highly successful, reaching sales of over a billion dollars in the first three years, the first store to do so in history. 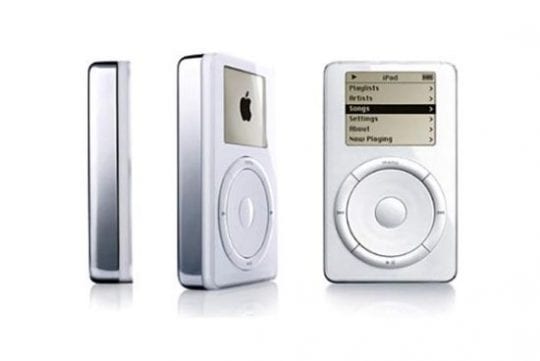 While Apple Stores had potential, they weren’t widespread, and Apple still had to have a retail presence to sell products. When Apple released the iPod in 2001, it was only sold by Apple and was only compatible with Macs. Apple’s leadership tried to convince Jobs not to do both of these things for a long time, and by 2003, they had convinced him.

Creating an iTunes for Windows was the easy part, getting it on machines was hard. Additionally, Jobs had already severed their big-box relationships in the 90’s, so how could they get iPod back into retail? Jobs came up with a plan to fix both of these problems.

Steve Jobs had recently met HP CEO Carly Fiorina, who had an admiration for Jobs and wanted to create new and innovative products in a similar vein to Apple. So, Jobs came to her with a deal. Apple would allow HP to create an HP iPod, with both an HP and Apple logo on the back. They would get a share of the profits, and in return, HP would a) Give Apple access to its supply chain and retail partnerships, b) pre-install iTunes on all computers, and c) not create an MP3 player during the deal, which would end in 2006. HP agreed, and at CES 2004, Carly Fiorina unveiled the HP+iPod.

At the event, she discussed how much her company cared about innovation. So, afterward, a reporter asked her why her company decided to resell someone else’s invention as opposed to making their own. She said this was their own because she got to choose the color, which was an HP blue. The reporter called Jobs immediately after and asked if HP was going to be allowed to release the iPod in blue, he responded ‘We’ll see.’

The HP+iPod failed, did not come out in blue, but gave Apple new relationships with retail partners. 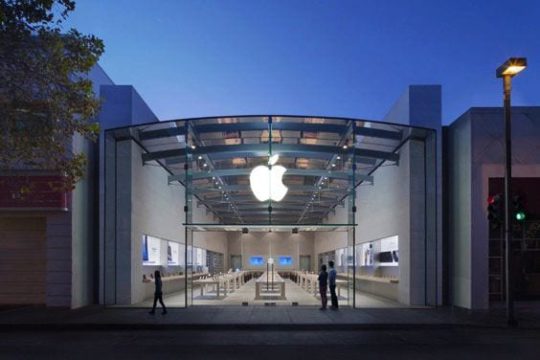 Apple began to build more and more stores, most of these in malls, but some stand alone stores, best known for their unique architecture. These include stores in Grand Central Station, New York City, and Union Square.

One unusual story, in 2012, Apple opened a new, flagship store in Palo Alto. The store featured a complete redesign and was meant to be the standard for the future of Apple Stores. One change was a curved ceiling, which was supposed to help noise move through the room. Instead, it had the opposite effect. The building had been misdesigned, and had resulted in a place that couldn’t allow sound to escape, and was continuously getting louder over time. Reporters would go in with decibel readers weekly, and see it slowly go up five points each week.

While the Palo Alto store was a small misstep, Apple Stores are thriving, both sales and design wise. The company now has 498 stores in 22 countries. 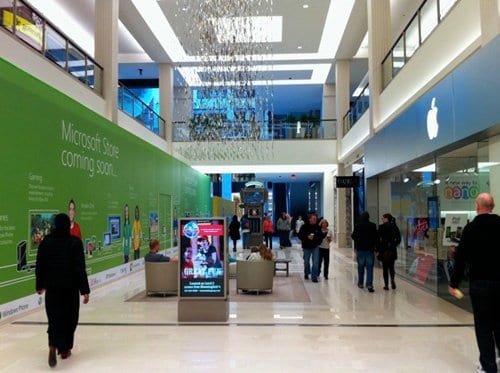 The success of Apple Stores resulted in significant changes to other retails stores. Because Apple employees didn’t work on commission, they had no incentive to sell a machine, just to help people out who want an Apple product. The creation of an Apple Store made PC sales drop significantly, and helped bring the Mac back to life, as well as make future products like iPod and iPhone possible.

The most notable ripoff of the Apple Store came from the Microsoft Store, first opened in 2009. Microsoft noticed how successful Apple was at retail, and decided to create a space for Windows machines and Xboxes in an Apple-like environment. These stores were for many years only placed next to Apple Stores and failed to reach the success of Apple. 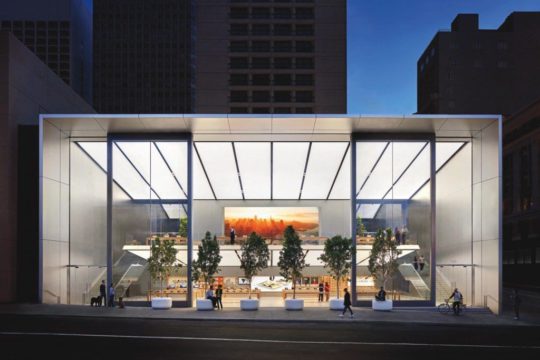 In May 2016, Apple opened a new ‘flagship store’ in Union Square, San Fransisco. The store is meant to show the future of Apple Stores and rethinks many ideas behind the original concept.

The first of these is called ‘The Avenue.’ The Avenue includes interactive ‘windows’ that display the companies latest products and third-party accessories. This section also includes new ‘Creative Pros’ that help users with their ideas and expanding the capabilities of their devices.

The second is the Genius Grove, replacing the Genius Bar. While conceptually it is the same, an area where an Apple employee helps you with your product, it is instead located under large indoor trees with nice tables. 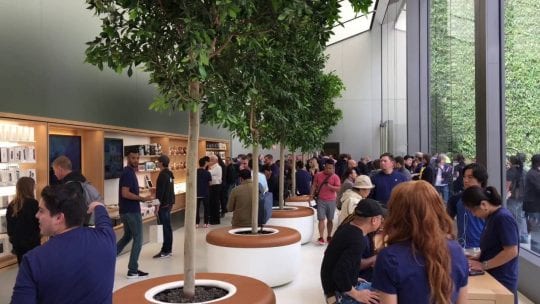 The third is called ‘The Forum”. This is large communal space with a massive, theater size 6K display. Its primary purpose is to support the new ‘Today at Apple’ program, which brings in creatives from around the area to perform. It also includes classes for learning or expanding your knowledge about your devices.

The fourth is called ‘The Plaza,’ which will only be featured at Apple’s biggest stores. The Plaza is open 24/7 and features Wi-Fi and seating, as well as additional performances by local artists.

The last is called “The Boardroom,” which is a place for Apple representatives to give hands-on and training to ‘entrepreneurs, developers and other small and medium business customers.’

Apple plans to expand these features out to future stores throughout the next few years. They have also begun to renovate existing stores to include these additions. 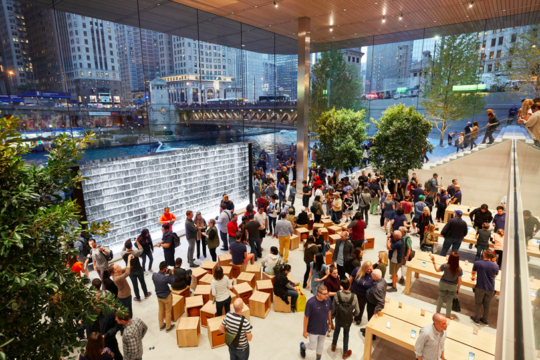 Last month, Apple opened their new flagship store on Chicago’s riverfront. This is Apple’s first town square retail concept store and will be followed by other similar large stores in many cities around the world.

“When Apple opened on North Michigan Avenue in 2003, it was our first flagship store, and now we are back in Chicago opening the first in a new generation of Apple’s most significant worldwide retail locations,” said Angela Ahrendts, Apple’s senior vice president of Retail.

The one thing I would like to see change that hasn’t in the latest flagship store is Genius lines. If you are a walk-in, you typically can get help in 10-15 minutes, which is good. However, if you have an appointment, you still end up waiting those same 10-15 minutes. I hope this is addressed in the future.

Apple’s stores remain the most profitable in the world. The company seems to have good ideas for its future. And, people are still interested in trying things before buying, which can’t be done online.