You are here: Home / News / Everything Apple Announced At Its ‘One More Thing’ Event

Well, it’s official: We have finally reached the end of Apple’s 2020 announcements. In my memory, this is the biggest announcement year Apple has ever had. And if I’m not mistaken, they updated nearly every single one of their major product lineups except for the desktop Mac.

If you found yourself skipping Apple’s virtual keynote on November 10th, don’t worry. We’ll cover everything that was announced in this post, and in future posts, we’ll cover these announcements in more detail.

Everything Apple announced at One More Thing in November 2020

The first thing Apple announced was its new M1 chip. In June, Apple announced that it would be announcing this chip sometime before the end of the year, and now, we finally know what it’s called (so long “Apple Silicon”). 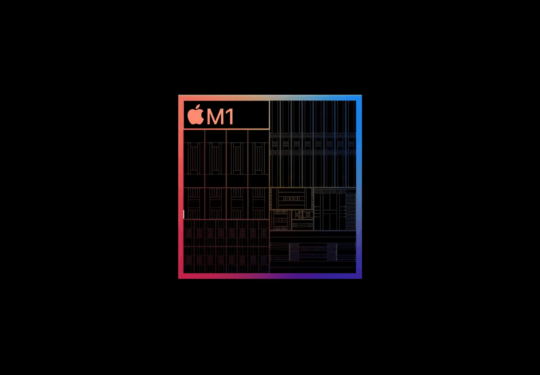 In a way, the entire event revolved around this announcement. Apple unveiled a new lineup of MacBooks, which are essentially the same as previous generations, except now with the M1 chip. This gives us a window into how much of a leap in performance we can expect from the M1 and what level of engineering was involved here.

As you would expect, it seems to be an exceptionally impressive chip. No one has hands-on experience with it yet, but the claims Apple has made are exciting, to say the least. This chip features 16 billion transistors, which is the most ever offered in an Apple chip. It also features an 8-core process, 8-core GPU, and a 16-core neural engine.

We’ll go into greater depth on this chip later in the week, but needless to say, the M1 and its ancestors will usher in a new era of Apple computing.

The launch of macOS Big Sur

This is yet another announcement that wasn’t too surprising. The macOS Big Sur beta has been out since June (you are reading an article written on this beta) but now we finally have a release date! Thursday, November 12th, all Mac users will get a free macOS Big Sur update.

Again, we’ll be covering this update in more detail soon, but for those who haven’t heard anything about Big Sur yet, here’s some of what you can expect:

One of the things we didn’t necessarily expect was how optimized for the M1 chip the Big Sur release would be. For instance, Apple showed off that M1 Macs will wake instantly, run much quieter, generate far less heat, increase your overall security, and provide insane battery life. 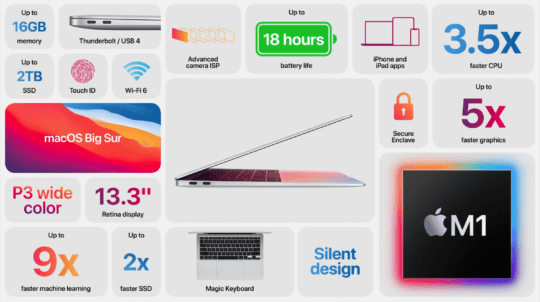 Again, no one has this MacBook Air yet, so we’re just basing this on Apple’s claims. According to the keynote, the M1 MacBook Air will feature 3.5x faster performance. That means the MacBook Air has the potential to go from a light usage device to a reasonably powered tool.

Apple also announced that this MacBook would offer 5x more powerful graphics performance, faster SSDs, up to 18 hours of battery life, and better image processing on the front-facing camera.

To me, the most surprising announcement was the refresh of the Mac mini, a device that Apple infamously ignores for long periods. This device not only got a price decrease but now comes with the M1 chip, making it a more viable alternative to a fully-fledged desktop Mac. 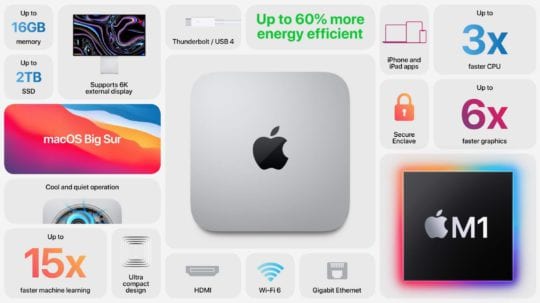 This device will probably be overlooked by most, but I hope Apple continues to innovate the Mac mini, as it’s one of its only modular computing devices.

Of course, Apple saved the best for last. At the end of the keynote, Apple unveiled the new M1 MacBook Pro, which seems to be the most exciting jump in performance for all of its new devices. Apple is currently only offering a 13-inch M1 MacBook Pro, so those who want a larger screen will need to wait until 2021. 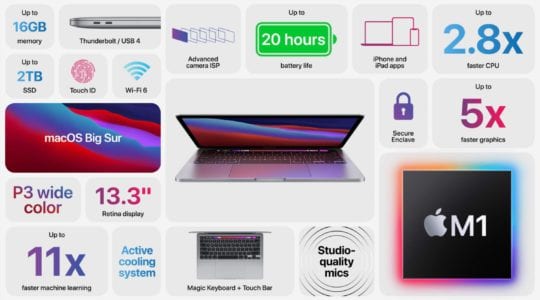 This device runs 2.8x faster than its predecessor, offers 5x greater graphics performance, and 11x faster machine learning. According to Apple, this machine learning performance is the fastest in its class, though to be honest, we’re not entirely sure what this statement means. But it’s safe to say that it’s a speedy little laptop.

Perhaps the most mind-blowing aspect of this MacBook Pro, however, is that it doubles the battery performance of the previous model. You can now get up to 20 hours of use on a single charge, which is more than most people are awake in the day. So if you’re someone who’s on the go a lot, this is pretty incredible news.

When can you get all of these new goodies?

Right now! Apple launched all of these new Macs on its store immediately, and macOS Big Sur should be publicly available by the time you’re reading this. If you’re not sure which of these devices to choose, sign up for our newsletter and stay tuned, as I’ll be going into more detail on each of these devices throughout this week.

Until then, I wish you and your wallet the best!

What did Apple announce this week?

What is the M1 chip?

The M1 chip is the latest chip engineered by Apple. It’s made specifically for Macs and MacBooks. This is a big deal, as Apple has been using Intel chips for several years now. It appears that this chip is going to offer a significant leap in performance, efficiency, and battery life for Apple’s lineup of Macs.

Can I still watch Apple’s ‘One More Thing’ keynote?

Yep! The keynote is uploaded to Apple’s YouTube channel here.