You are here: Home / News / FaceTime In iOS 15 Is Getting A Huge Upgrade

Welcome to another edition of AppleToolBox’s WWDC21 coverage, where we bring you all of the news, updates, and reveals that happened at Apple over the last week. Today, we’re going to be talking about FaceTime in iOS 15.

I’ve talked about the changes coming to FaceTime a bit in my WWDC21 recap post. But since that post was meant to cover everything Apple announced at WWDC21, I wasn’t able to go into as much depth as I wanted to.

That’s what this post is for! I’m going to deep dive into each of the features that have been added to FaceTime. I’ll also be giving my opinion on them and how I see them fitting into the future of the iPhone.

Every new feature for FaceTime in iOS 15

When I first heard that spatial audio was coming to FaceTime in iOS 15, I wasn’t too impressed. But the more time I’ve had to think about it, the more exciting it sounds.

Spatial audio refers to audio that sounds like it’s coming from a direction in space rather than your speaker. For instance, if you’re watching a movie and someone is on the left side of the screen, spatial audio will make it sound like their voice is coming from your left.

In FaceTime, spatial audio will be used when you have multiple people on a FaceTime call at once. In iOS 14, FaceTime not only got the ability to call several people at once, but also a neat floating tile display of everyone’s faces in the call.

While using FaceTime in iOS 15, it will sound like each person’s voice is coming from their tile’s position on your screen. And I’m starting to think that this is a bit more than “neat”.

Apple also added spatial audio to Apple Music over the last week as well. This has me thinking that this feature might start to permeate iOS, becoming a natural and subtle part of the way we interact with our iPhones.

I foresee it eventually resembling haptic feedback. We feel it all the time, but never really notice it. It just enhances your experience satisfyingly and naturally. If that ends up panning out, then its inclusion in FaceTime is a pretty big deal.

By far the biggest update coming to FaceTime in iOS 15 is SharePlay. SharePlay is a completely new feature designed to make the time you spend on video calls more intimate.

In essence, SharePlay is a screen-sharing feature. It allows you to share the screen of compatible apps with other people on your FaceTime call. 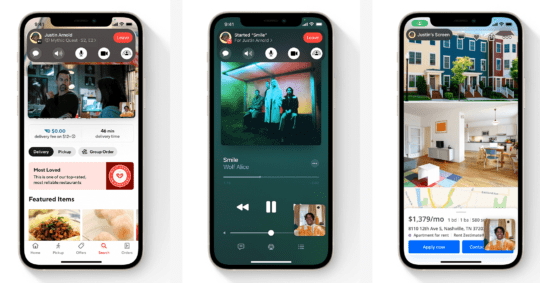 Not only is this content shared, but it’s synced as well. So if you’re watching a movie on Netflix with your friends, you’ll all be watching it at the same time. If anyone pauses it, it pauses for everyone. Same for rewinding and skipping forward.

As of now, this feature works with the Appel TV app, Apple Music, and general screen sharing on your device. It is coming with an API, however, so other apps like Netflix and Spotify should be able to take advantage of it.

I heard MKBHD mention that he would like to see it work with YouTube, which hadn’t even occurred to me. But as someone who watches YouTube content far more often than traditional media, I think that’s a great idea.

Another feature new to FaceTime in iOS 15 has to do with your iPhone’s mic. Specifically, there are now two new mic modes you can choose from in this version of FaceTime. 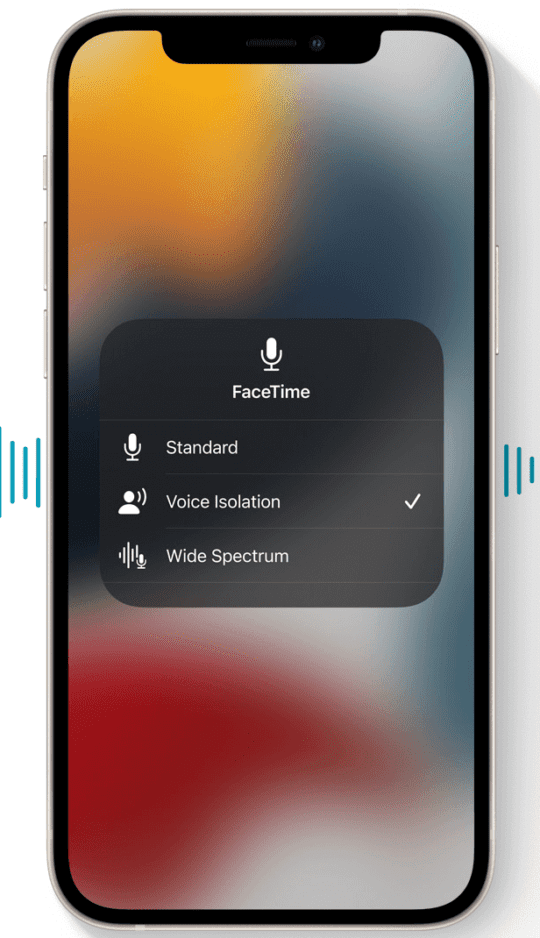 The first is Voice Isolation mode. This mode isolates your voice from the rest of your background noise. This way, the person listening can only hear you speaking – and nothing else.

Apple showed this feature off by having someone blow a leaf blower in the same room as someone using this feature, and you couldn’t hear the leaf blower at all. I’m a little skeptical that it’s that good, but we’ll see!

The second mic mode is Wide Spectrum. When enabled, the opposite of Voice Isolation will happen. FaceTime won’t focus on your voice at all. Instead, it’ll go out of its way to maximize all of the sounds in your environment.

While that might sound kind of pointless, it’s useful when you’re FaceTiming at a concert, family gathering, or theme park, and want to bring the experience to the person you’re calling.

I’m not sure yet if this feature is just going to treat all of the audio the mic picks up as equal, or if it’s going to amplify multiple layers of your audio. In other words, will this feature just make everything loud, or will it listen for your voice, music, loud sounds, cheering, etc., and dynamically rebalance those sounds?

FaceTime will now work on Android, Windows, and any other device with an internet connection

This is probably the second biggest feature coming to FaceTime in iOS 15. For the first time, Apple is making one of its proprietary modes of communication available cross-platform. 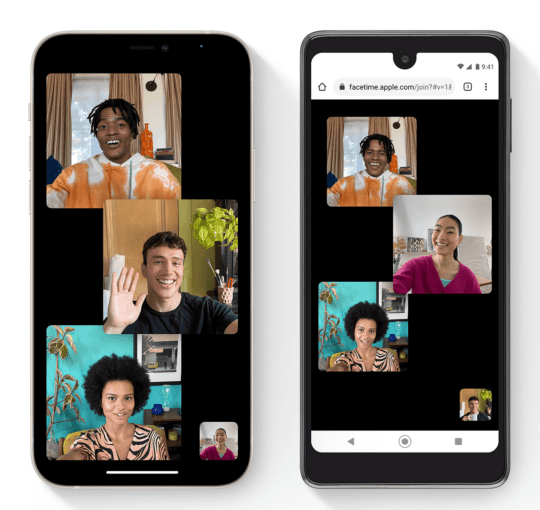 These links will open a FaceTime client in a browser. So anyone can click the link, open it in their browser of choice, and join in on a FaceTime call.

While I think Apple’s main goal with this feature is to make FaceTime more accessible to a professional audience, I can see this being just as popular among friends and family.

Part of the benefit of having a link for a video call, though, is to schedule a meeting. You can create the link, send it via email to your colleagues, add it to your calendar, and start the call at an agreed-upon time.

However you decide to use it, I think this is a feature that everyone can get behind.

You can use Portrait Mode in FaceTime in iOS 15

I would consider this to be one of the lesser updates to FaceTime in iOS 15, but it’s interesting nonetheless. You’ll now be able to use Portrait Mode during a FaceTime call.

For those that don’t know, Portrait Mode is a setting in the iOS Camera app that detects your face and torso and isolates it from the background. It then gives you certain options like blurring the background or replacing the background with all white or all black. It also makes your face look a bit better, though not in a distorting way like a Snapchat filter.

The Portrait Mode coming to FaceTime won’t be so robust. It’ll just blur your background slightly during a FaceTime call, making you the focus of the call.

I’m not sure what the benefit is with this, aside from that it’s a nice option to have. I guess the only drawback would be that it will drain your battery slightly faster. Regardless, it’s here, and it’s optional!

Next up is a neat feature in FaceTime in iOS 15 that The Verge pointed out. It’s more so a bit of polish than a feature, but that’s semantics.

In this updated version of FaceTime, you’ll get an unobstructive notification if you try to speak while muted. This way, you’ll be less likely to have that awkward moment where you talk for ten seconds, only to realize no one can hear you.

I don’t have iOS 15 yet so I’m not sure exactly how this feature works. I’m pretty sure it won’t just display the notification if you’re speaking since people often use the mute button to speak without being heard on the call.

Instead, I think there will be some kind of attention awareness at play. If your iPhone detects that you’re looking at the screen and speaking, then it’ll display the notification. But if you’re talking while muted and not looking at your iPhone, this notification won’t appear.

That’s just speculation though – it’s how I would implement the feature. I’ll check it out hands-on after the public beta is out!

Another handy feature coming to FaceTime in iOS 15 is the ability to zoom in or out with the rear-facing camera. Previously, you were fixed to the default zoom when you swapped cameras in FaceTime.

It should be noted that this feature won’t be coming to the front-facing camera in FaceTime. That’s because the front-facing (or selfie) camera doesn’t zoom at all. It never has. The lens on the selfie camera isn’t as robust as the rear one, so zooming isn’t an option.

Lastly, FaceTime will be getting a new view option when you’re calling multiple people in FaceTime in iOS 15.

In iOS 14, Apple added the ability to FaceTime multiple people at once. To manage all of the different faces in your call, FaceTime had a “floating tile” display. This display shows everyone’s heads in these little tiles on a black background. As people speak, their heads will grow and move to the forefront. 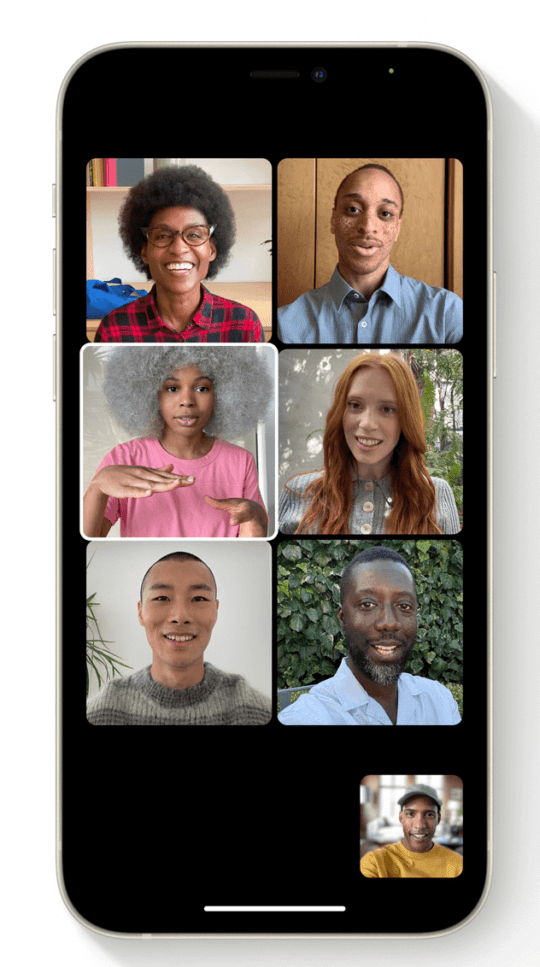 The new grid view will be an alternative option to this. You’ll see each person’s face in squares of equal size. A bit less animated and “smart”, but probably easier on the eyes for most of us.

The floating tile view isn’t going anywhere. You’ll just be able to choose between these two views in iOS 15.

And that’s it! That’s everything new coming to FaceTime in iOS 15.

It’s not, however, everything new coming to iOS 15. This is going to be a pretty big year for iPhone, following an equally big year in 2020. We’re covering it all here at AppleToolBox, so be sure to check in and follow all the news!

You can start by checking out this iOS 15 new features roundup.