You are here: Home / Apple Watch / Future Apple Watch bands could let you “upgrade” to cellular after purchase 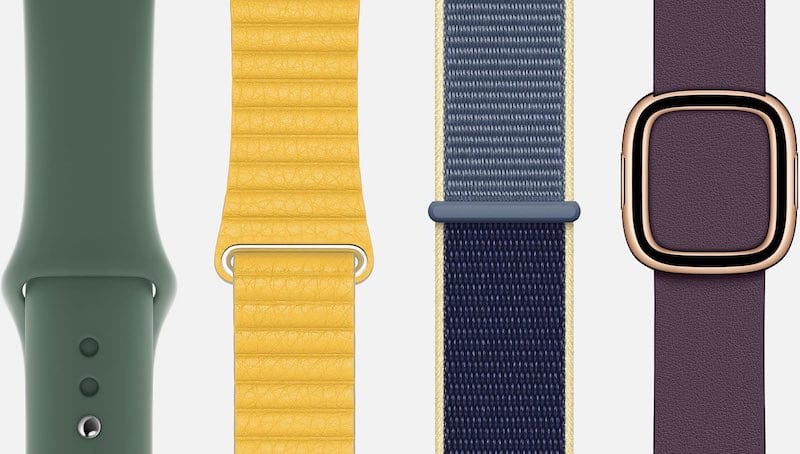 This week, the Cupertino tech giant filed a new patent application that could mean big changes for the Apple Watch. Or, more specifically, Apple Watch bands.

The Apple patent application, No. 20190341677, was published by the U.S. Patent & Trademark Office on Thursday. And it essentially describes the use of wearable watch bands that contain wireless connectivity components.

This is obviously a stark contrast to most watches and smartwatches, in which “neither the watch body nor any other device interacts with the watch band,” as the patent puts it.

“For example, an antenna and appropriate control circuitry can be provided in a watch band, rather than in a watch body,” the patent continues.

Apple’s patent writers note that the connectivity components could be hidden within a watch band both to protect them from the elements and to conceal them to “enhance the aesthetic appearance of the watch band.” As you might expect, the circuitry would also be able to “bend” and “flex” without any damage.

So, essentially, an Apple Watch band that allows an Apple Watch to communicate with the outside world. That may not make much sense at this point, but the update could have several intriguing features.

While the patent may not seem all that interesting on its own, there are a few possible use cases that make it much more exciting for Apple Watch users.

Here are just a few of the ways that antenna-equipped bands could revolutionize the Apple flagship wearable.

This is far from the only way that Apple is exploring using the Apple Watch bands for deeper features. The company has patented methods for embedding everything from health sensors to a camera in a watch band.

All of this makes it pretty clear that a so-called “Apple Watch Smart Band” may indeed be something that we’ll see eventually.

Of course, Apple files a lot of patents that never actually end up seeing the light of day. More than that, a patent application doesn’t give any indication when we’ll actually see the technology it describes.

But, with all of Apple’s continued development of “smart” watch bands, we may very well see a more intelligent product enter the market fairly soon.