You are here: Home / Apple Watch / Future Apple Watch could respond to hand movements and gestures for interaction

Apple is continuously trying to think outside the box when it comes to making its products more user friendly.

In a recently published patent 10,558,278, Apple describes a feature where one can interact with your Apple Watch without touching the display screen or using other physical input mechanisms. The Apple Watch in this case will be able to perform an operation in response to a positioning of user’s hand and/or the orientation of the Watch.

The central idea behind this innovation is that when users interact with their Apple Watch today, it requires the user to use both their hands, restricting their use for other purposes. The second and more important reason is that the tactile interactions consume battery power.

By adopting a user interface that doesn’t require the user to touch the display screen or the buttons on the device, Apple could find an easy way that will allow users to interact with alerts and other notifications on their Apple Watch with much ease and also save power.

In order to achieve this feature, Apple is proposing some novel ideas around using the tilt sensor and bio-sensors on the Apple Watch. 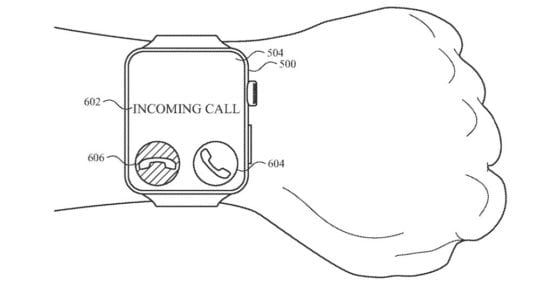 In the case of the tilt sensor, the idea is as you rotate your wrist in one direction or the other, the Watch will be able to interpret this movement and associate it with a particular command. For example, assume that you have a notification on your Watch, with this feature, instead of tapping the screen, you can simply rotate your wrist in a particular direction and review the details of the notification.

In case of the variant, where a tile sensor is used along with a bio-sensor, the bio sensor serves to provide additional information associated with the positioning of the user’s hands.

In order for this mechanism to work, Apple will have to change the graphical elements in watchOS, so that they can respond to wrist movements in new ways. This would allow for much easier interactions , especially for folks who have to remove their gloves in the middle of the winter to respond to something on their watch!