You are here: Home / Mac / Get Ready for the Future: Apple’s Macbook Air Is Here

The day has finally arrived. Apple’s transition away from Intel-based Mac computers has started with the arrival of the Apple M1 chip. This new processor is found in the late-2020 versions of the 13-inch MacBook Pro, MacBook Air, and Mac Mini.

Apple dropped this bombshell announcement back at WWDC ’20, but it has been rumored for some time. When looking at how an iPhone performs against the processors used in Android flagships, it’s not a very close battle. Especially when it comes to software optimization with the hardware, despite lesser specs compared to the Android competition.

It’s been almost 13 years since the original MacBook Air was taken out of the envelope by the late Steve Jobs on stage. This marked a shift in the laptop market, with the MacBook Air becoming the de-facto choice for anyone who wanted to just get their hands on a Mac.

Fast forward until now, and we have seen a few iterations since the original Air was released. But there was a long period of stagnation, where some wondered if the MacBook Air would even stick around. This was further driven home after Apple dabbled with the 12-inch MacBook, before that eventually bit the dust.

All of those iterations and times where it seemed the beloved Air had breathed its last breath have led to this point. Apple’s M1 chip is at the helm here, bringing with it power that is simply unrivaled by anything that Intel is providing on a laptop. 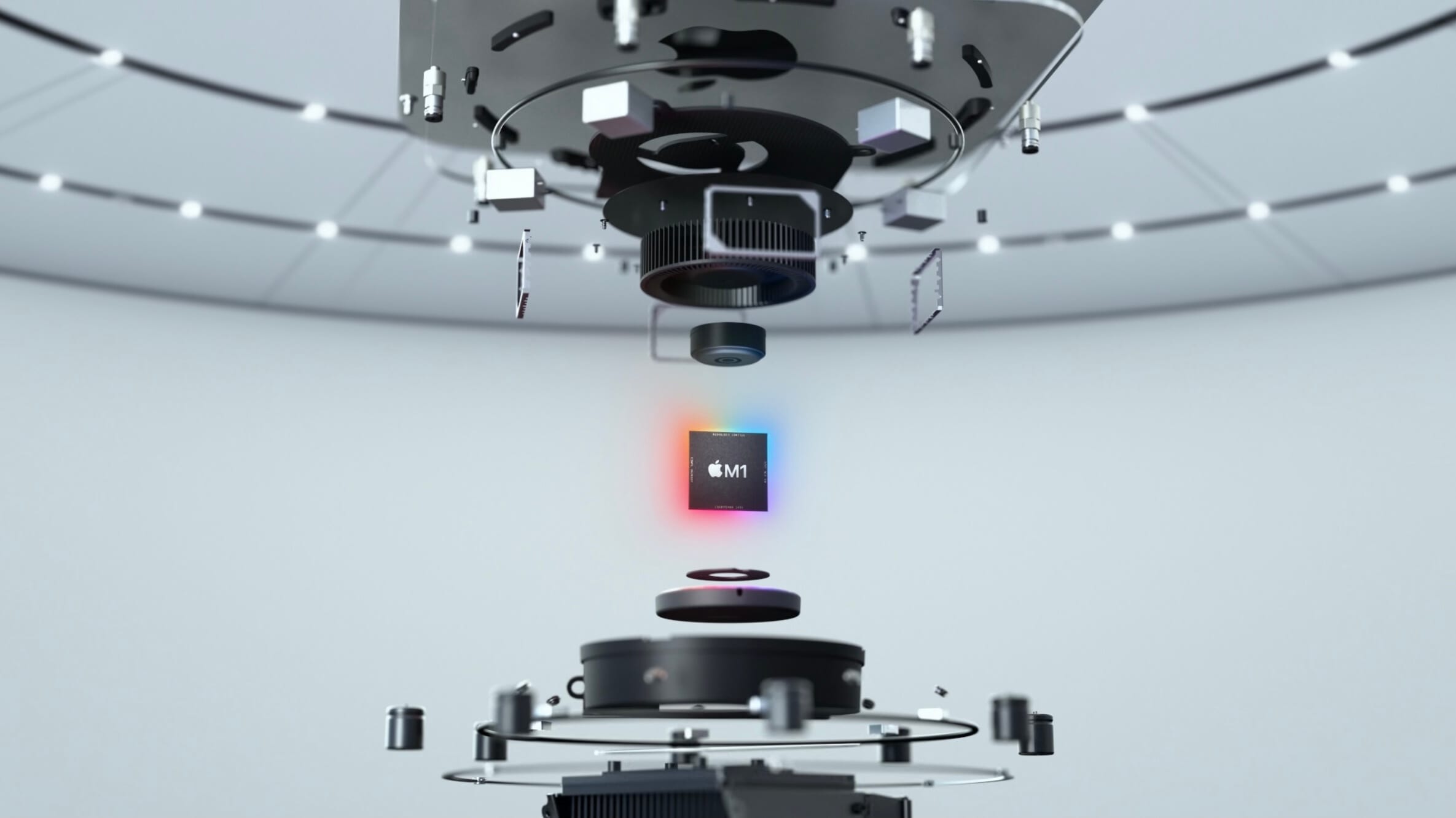 The M1 chip is built on the same 5-nanometer process as Apple’s A14 processor found in the iPhone 12 lineup. In addition to providing more transistors (16 billion), this new processor also has a focus on battery life, performance, and efficiency.

Intel has been the exclusive chipset for Mac computers ever since Apple transitioned from the PowerPC days. However, Apple has put quite an impressive amount of work into this new self-developed chipset. In addition to providing an 8-core CPU paired with up to an 8-core GPU, Apple also packed its 16-core Neural Engine.

Intel’s processors have not been the most impressive in recent years. With the popularity and impressive performance of the processors found in our smartphones and iPads, Apple made the decision to bring its own SoC’s to the Mac.

Everything to know about the new MacBook Air 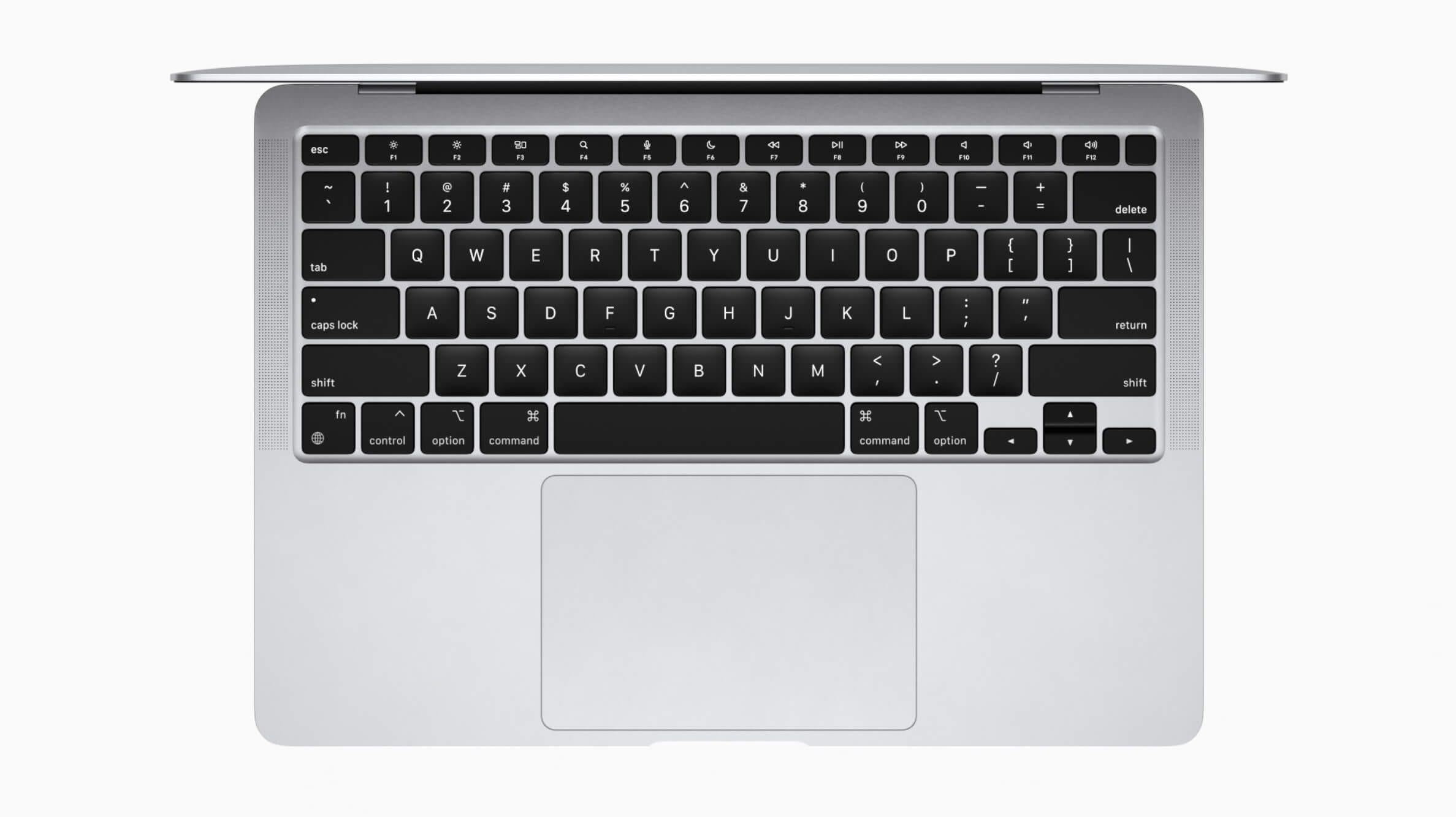 The late-2020 MacBook Air represents a clash of old versus new, of sorts. Apple has provided the same traditional design of the MacBook Air, while adding the all-new M1 chip for the “new” smarts. This combination could be a real game-changer for not just Apple, but the computer market on the whole. 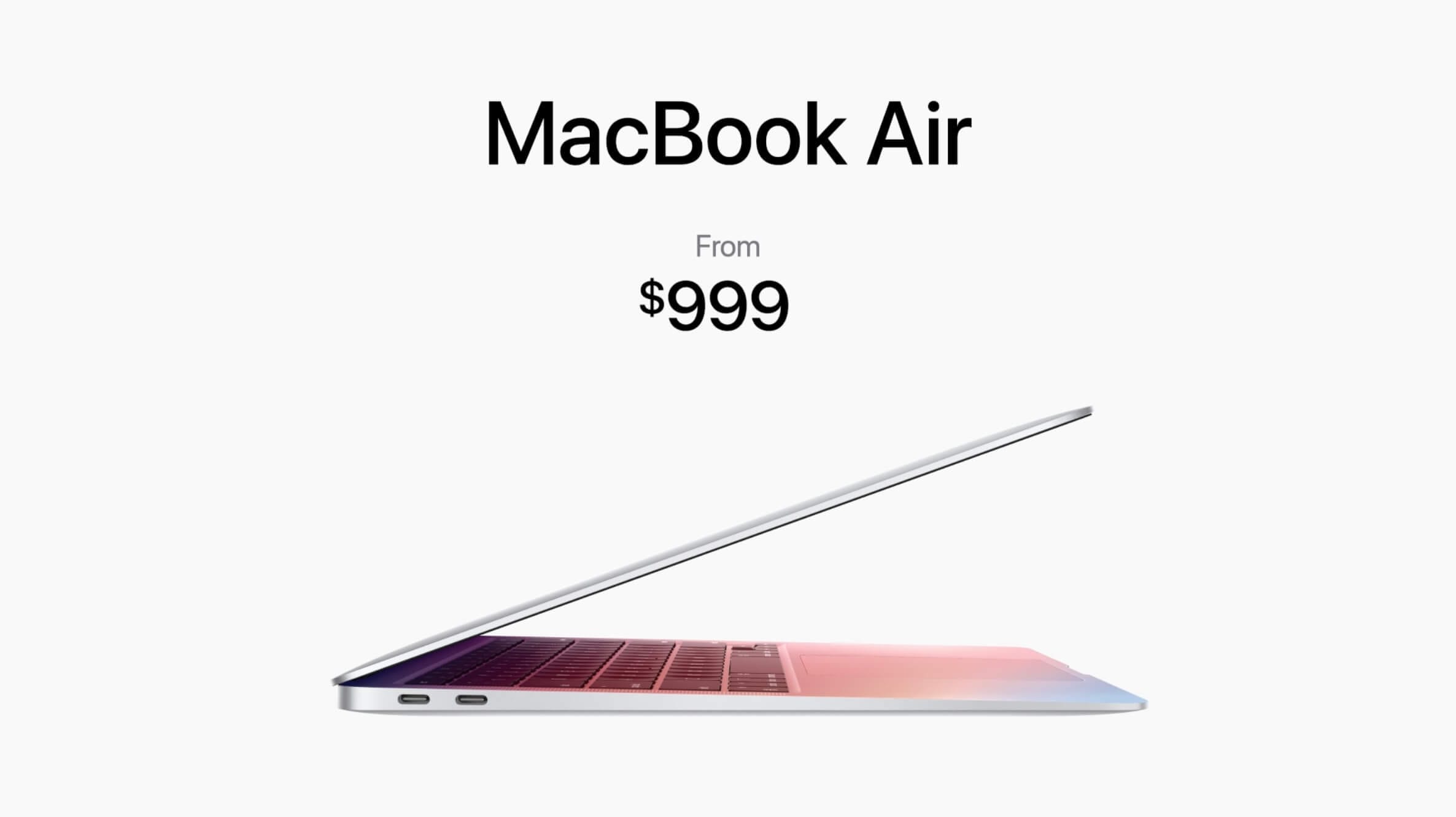 Getting the fun stuff out of the way first. The MacBook Air’s pricing has gone unchanged, meaning that you can pick one up today for just $999 without an education discount. This provides you with 8GB of RAM and 256GB of onboard storage.

For Apple to provide all of this power in a lightweight and classic form factor, at the same price as its predecessor, is pretty remarkable. There’s no “Apple tax” for having the M1 onboard, along with the same great features you have come to expect from Apple hardware.

Can you upgrade the RAM or storage?

As has been the case for years now, you cannot customize and swap out parts on the MacBook Air after it has been manufactured. Well, at least YOU can’t. Nevertheless, the M1 MacBook comes in several configurations:

There are no additional configurations for different versions of the M1 chip, similar to what we’ve seen from Intel’s lineup. The M1 is the M1, no matter which way you look at it. And it’s clear that this is just the beginning, as the MacBook Air M1 is “limited” to 16GB of RAM, which we should expect to increase with a modified version for the 16-inch MacBook Pro. 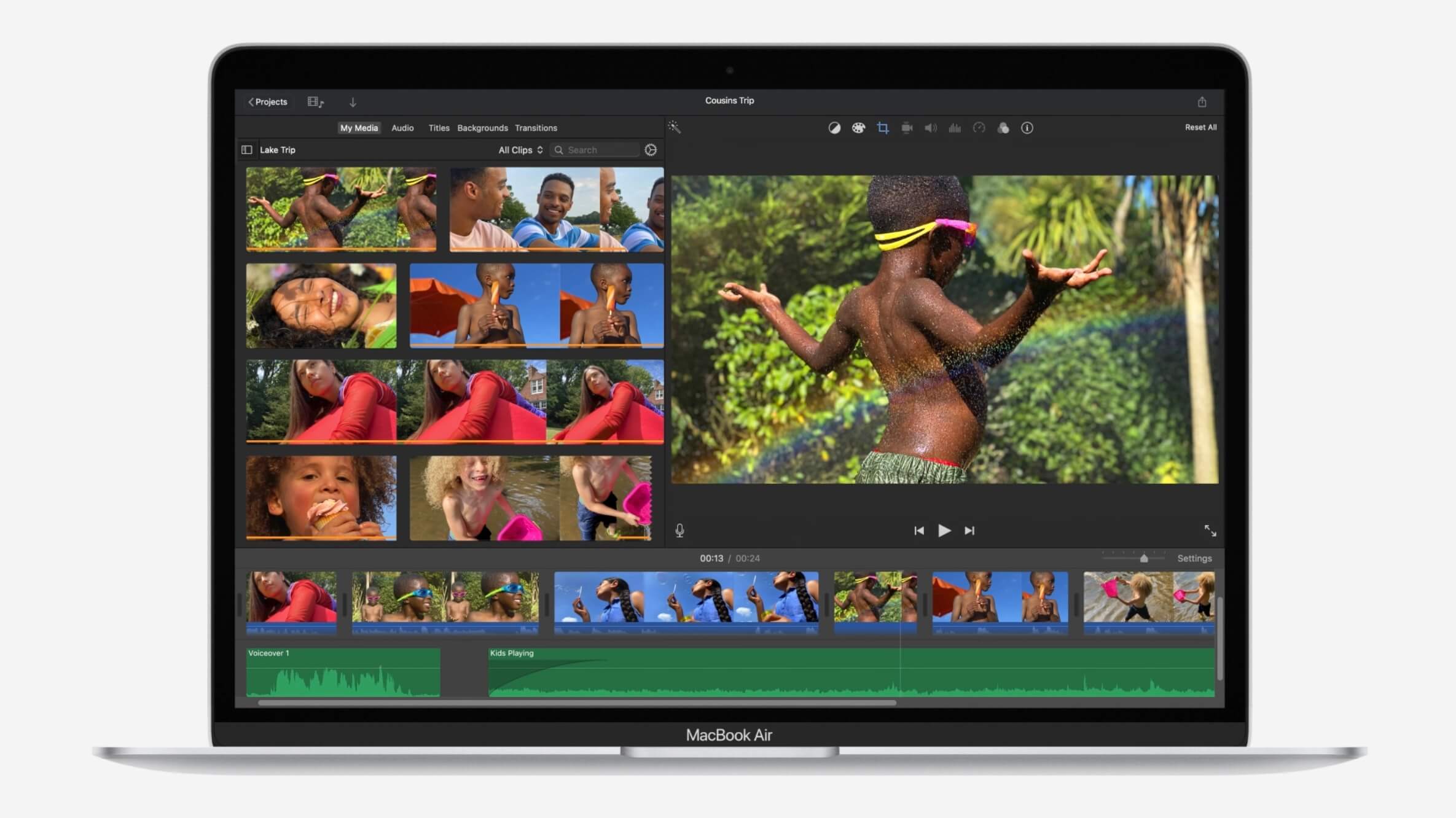 The Apple M1 promises to deliver up to 3.5x faster CPU performance compared to previous generation chipsets. GPU performance is up to 6x faster, along with providing the battery life we all crave, with Macs lasting up to 2x longer than those running Intel-powered Macs.

While some apps have already been updated to support the new M1 chip, there are still those that have not, or will not, be updated. For apps that do support the M1 processor, these will work in tandem with macOS Big Sur for an enhanced experience.

For the first time on a Mac, you can actually download, install, and use iOS/iPadOS apps on a Mac. This is simply earth-shattering and one reason why many folks will end up flocking to the MacBook Air and MacBook Pro before the end of 2020.

Perhaps one of the biggest concerns with any new device comes down to the battery life. Previous generations of the MacBook Air would tap out around 12-13 hours of usage. That’s not the case with the new M1-powered Air, as Apple is touting up to 18 hours of battery life on a single charge. And that’s with all of the power being provided by the 8-core CPU, 8-core GPU, and 16-core Neural Engine. 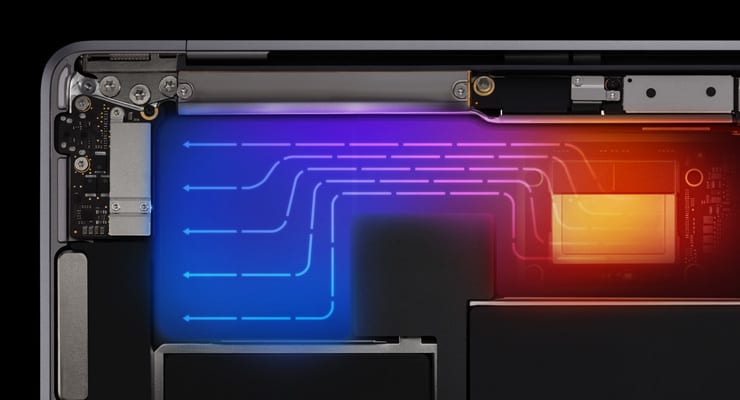 When you think about the MacBook Air, you likely think about portability and the fact that it’s as light as can be. Apple has kept the same “wedge design” form factor that we have all known and loved over the years. This has been regardless of pitfalls or frustrations around the fans that have been built into the Air.

Apple refreshed the MacBook Air originally, earlier in 2020 with the new Magic Keyboard, newer Intel processor, and more storage. But the problem surrounding the fans and overheating still were surfacing for many.

With the M1 MacBook Air, those problems seem to have been solved. Apple opted to remove the fans entirely from the Air, meaning that you won’t have to worry about your new laptop sounding like a jet engine. Instead, the Air now takes advantage of efficiency provided by the M1 and pairs it with an aluminum heat spreader to dissipate any heat that is generated. All of this happens while your MacBook Air stays completely silent.

Since the Air is not really meant for the “Pro-sumers” out there, the lack of ports should come as no surprise. Although Apple has included two Thunderbolt 3 ports, which are compatible with USB-4, that’s it. You won’t find an SD card reader, HDMI port, or anything else other than the two Thunderbolt ports and a 3.5mm headphone jack.

These enhanced and improved Thunderbolt ports are capable of doing much more than one would expect. During the announcement, Apple showed that the MacBook Air is capable of powering the Pro Display XDR, which sports a 6K resolution. You’ll also find data transfer speeds of up to 40Gb/s, which should be more than sufficient for most users.

Under the hood, Apple has introduced the new Wi-Fi 6 chip. This improves stability and connectivity to wireless networks. Plus, it has the added benefit of being able to handle speeds of up to 1.2Gb/s, much more than the previous generation.

Finally, Apple has brought back the Touch ID sensor which doubles as a power button. While we still await the arrival of Face ID on our Macs, this will have to do and is actually quite useful when trying to navigate the web.

Hold your applause for the M1 MacBook Air

So while we have been raving about how wonderful this new MacBook Air seems to be on the outside, it’s not all roses and daisies. The first is for those who regularly use the webcam on their laptop for video conferencing calls. Apple claims to have upgraded the sensor being used, but the fact remains that we are stuck with a 720p webcam. Sure, it’ll do the job, but it’s just disappointing overall.

Everything about the MacBook Air, and all of the new M1-powered Macs, is all very new. While we trust Apple, it will be interesting to see what happens down the road and how the M1 stands up against the test of time.

App compatibility is one area where some may snark and say that you should just be using optimized software. The truth of the matter is that everyone’s workflows are different, meaning that you may not be able to just use a different application. Instead, you’ll need to rely on Apple’s implementation of the new Rosetta2 software. Now, the early reviews say that you won’t really notice a difference, that is, unless you use something like Chrome. But Google’s a whole different story that we’ll save for a later time.

Should you buy the new MacBook Air? 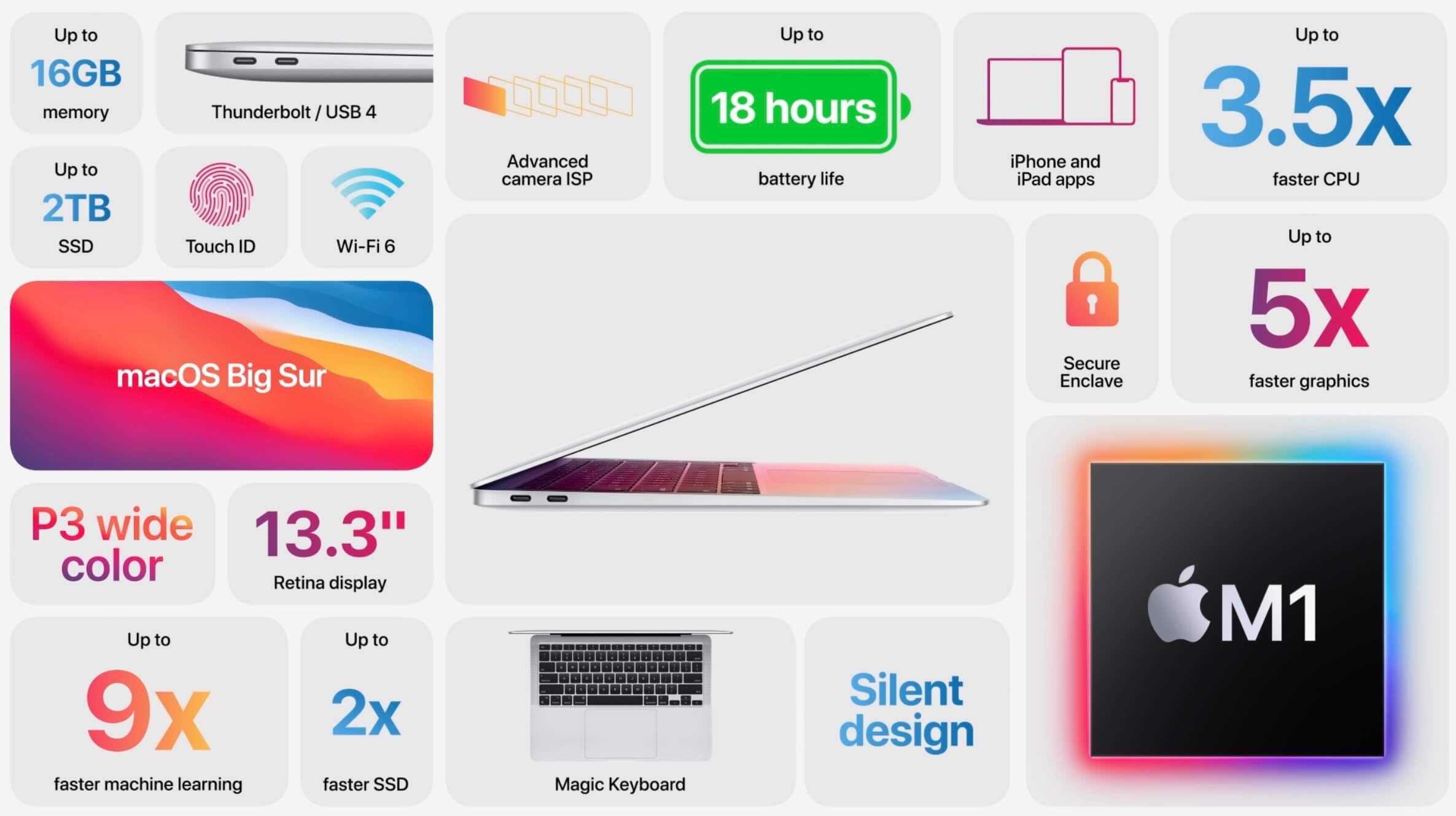 All of this leads up to the ever-important question of – should you buy one? Well, the answer is simple, yet complex at the same time. If you’re in the market for a new laptop, or like me, need to replace a damaged iPad Pro, then you should absolutely buy one. The MacBook Air represents a leap in what’s possible from our laptops thanks to the M1 chip and integration with Big Sur.

On the other hand, if you’ve upgraded or purchased a new laptop within the last few months, you likely will want to hold off. The MacBook Air, while revolutionary again, may not be for everyone. There are going to be some app incompatibility issues for you to overcome, and depending on what apps those are, the M1-powered Air may not be the best choice.