You are here: Home / News / The Future of the Mac in the Post-PC World 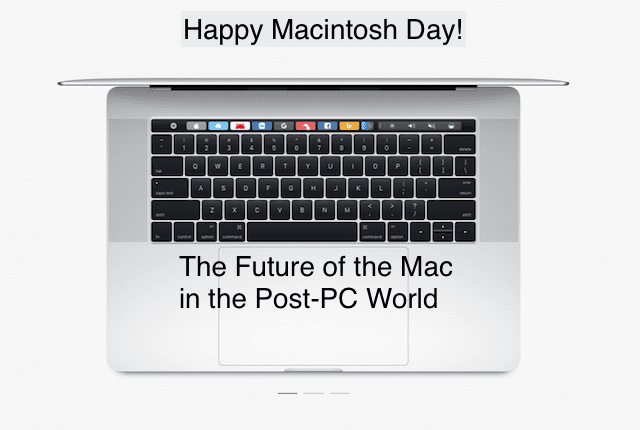 However, we now live in a world of iPhones and iPads, with Macs (and PCs as a whole) becoming less and less ubiquitous. This fact, alongside renewed worry about Apple’s intentions with the Mac from the Apple community, have caused many to worry about the direction of the Mac in the future.

While there is no questioning the Mac had a big hiccup this year – the MacBook Pro with Touch Bar had serious issues at launch, and devices such as the iMac and Mac Pro saw no update – I strongly believe when Tim Cook tells employees the company still deeply cares about the Mac.

I think the MacBook Pro with Touch Bar gives us a good hint as to what the portable Mac lineup will look like 3-5 years down the road. MacBook on the low-end and MacBook Pro on the high-end, but the desktop environment is still up in the air.

The biggest cause for concern amongst hardcore Mac users is the lack of a Mac Pro update since 2013. When Apple launched the updated machine as a surprise at WWDC 2013, it had been the first update to the machine since Mid-2010 (excluding an, and the first major refresh since 2006. Phil Schiller touted the ‘courage’ of the redesign, saying it showed Apple’s commitment to Pro users and also saying it shows Apple could still innovate.

One thing people need to realize is the following: Apple would not have updated the Mac Pro in 2013 if it didn’t have the intention to continue updating the device. What likely happened was an update was planned, but some form of internal or manufacturing issue occurred that resulted in a delay.

The iMac has been getting quite a bit of attention internally. At a various point, the company has considered adding high-end Intel processors and 8K displays to the device.

It is certainly possible Apple is planning on creating a professional version of the iMac, likely with a tweaked design for professionals, instead of updating the Mac Pro.

Regardless, it is clear Apple still has the Mac, and even desktop and professional Macs, on its mind. Without the Mac, there wouldn’t be an iPhone or iPad