You are here: Home / Reviews / Gboard for iOS Review – the Official iPhone Keyboard From Google

Back in the days of the iPhone 3GS and 4, Jailbreaking was a hot topic. Users could install a cracked version of iOS into their devices that included an app called Cydia and then allowed them to do things outside the borders of the App Store, including simple things like changing animations when loading apps to installing an entirely different notification center. Amongst the things you could do on a Jailbroken device was install a third-party keyboard.

First popularized in the early days of Android, third-party keyboards allowed developers to create better and smarter keyboards than the default. Users of the OS touted the feature as one of the main up-sells against Apple, and was one of the main arguments in the “Every iPhone is the same” mantra. Users of Android regularly, and maybe even commonly used the third-party Swype and SwiftKey keyboards over the stock one.

However, when Apple introduced iOS 8 in 2014, one of the headlining features was support for third-party keyboards. This was a seemingly unorthodox move from Apple, as it was the first time a developer could create an alternate system-wide feature. And while users finally had the choice to use a third-party keyboard, most didn’t.

While developers did begin to develop third-party keyboards, users were not impressed. The third party keyboards were all glitchy (a fault of iOS, not the developers), required special permissions buried inside of settings, and didn’t have access to features such as 3D touch and the internet that the regular keyboard did have. Apple’s keyboard was excellent, but the barriers in place made it hard for anyone to have a chance.

Last week, however, Google made the news with the surprise announcement of Gboard, a new keyboard *exclusively* for iOS. It quickly rose to the top of the App Store charts, and even Android users are asking Google why this is an iOS exclusive. I was skeptical and decided to use it as my default keyboard the past few days and, let me tell you; it’s fantastic.

When you first download Gboard, you’ll be walked through some of its primary features, and then asked to go into the settings and give it ‘Full Access,’ for it to gain access to the internet.

Some people worried that Google may be tracking what people search and type with the new keyboard, however, Google has made it clear that it won’t.

The keyboards main trick is the ability to search Google directly in the keyboard from anywhere. Whenever you have the keyboard open, to the left of the suggested words, is a Google logo. When you click it, a Google search box appears. Then you can, for example, find a restaurant while texting with a friend, get the address from your keyboard, and send it to your friend. Another example would be showing your friend a YouTube video from your keyboard.

The feature works well, however, because one of the limitations of third-party keyboards is the inability to paste on its own, it requires you to paste the information into the text field yourself.

While search is the main feature Google likes to talk about, some of its other features are its best. There is Swype on this keyboard, allowing you to move your finger across the keys spelling the word you want, and it figuring it out on its own. 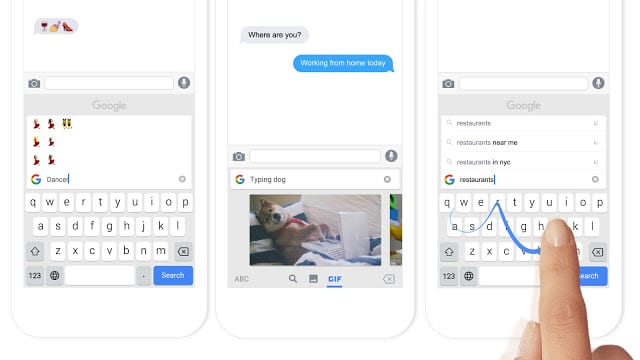 Additionally, the keyboard supports GIFs, and allows you to search and paste GIFs directly from the keyboard, and while it is certainly not the first to do this, it does it well.

As time went along, I found myself getting more and more used to the Gboard keyboard. One thing I missed was the ability to 3D touch as a cursor, but then found out you can drag your finger across the space bar in Gboard as a cursor, and it worked just as well.

This is without question the best third-party keyboard available on iOS. Is it better than the Apple keyboard? Maybe. I’d say certainly if there were a way to stop the glitchiness of third-party keyboards in iOS and make them truly on par with the default, but there are always occasions where you’ll have to use the stock keyboard. I’d recommend you try it out and see which one is better for you.

One last thing to note: This thing is terrible on the iPad. I don’t know how they screwed it up so badly, they claim they are going to fix it, but for now it is dreadful.

Gboard is available for free on the App Store for both iOS and iPad.