You are here: Home / How-to / How to Play Google Stadia on iPhone

As we recently covered in our tutorial on how to play Cyberpunk 2077 on the iPhone, there’s been a huge uptick in cloud gaming services. For that article, we took advantage of NVIDIA’s GeForce Now, but that is just one of the many options. Another comes straight from Google in the form of Stadia.

Google launched Stadia back in November of 2019 and has seen its fair share of ups and downs in terms of its library of games and reliability. Another sticking point for those in the iOS and iPadOS ecosystem has been the inability to play Stadia games on the iPhone or iPad.

This falls slightly in line with the ongoing battle between Apple and Google versus Epic Games. Apple is currently not allowing specific applications to be released on the App Store that try to circumvent the process for paying for apps through the App Store. It’s for this reason that we haven’t seen a proper Stadia, GeForce Now, or Xbox Cloud application hit the Play Store.

Nevertheless, Stadia has become a solid option for those looking for a cloud gaming experience.

How much does Stadia cost?

If you want to test Stadia out, the company offers a 30-day free trial for Stadia Pro. This provides access to the library of games available through Stadia. On a monthly basis, there are new games added which are available to be played for free.

But you can also use Stadia to purchase some other AAA titles such as Cyberpunk 2077, Star Wars Jedi Fallen Order, Assassin’s Creed Valhalla and more. We’ve already mentioned that you’ll be able to try out Stadia Pro for free for one month. Once that free trial is over, you can keep the subscription rolling for just $9.99 per month.

Play games on your iPhone with Stadia

If you’ve decided that you want to get started with Stadia, you’ll have to use the company’s PWA. This is also known as a Progressive Web App, and is essentially an application that uses Safari as its backbone on your mobile devices. PWA’s are pretty common, as it’s also how you can play GeForce Now on your iPhone or iPad. 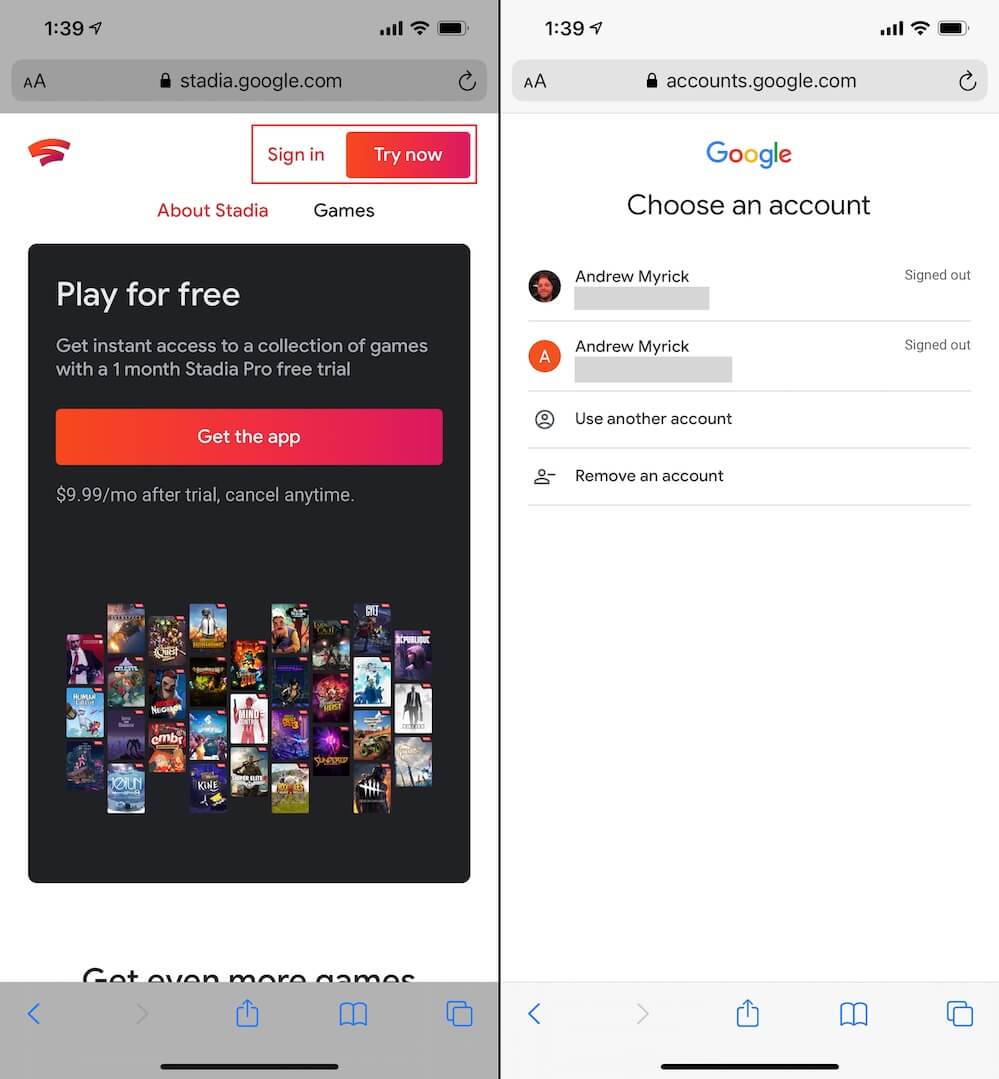 Here’s how to get started with Stadia on your iPhone and iPad: 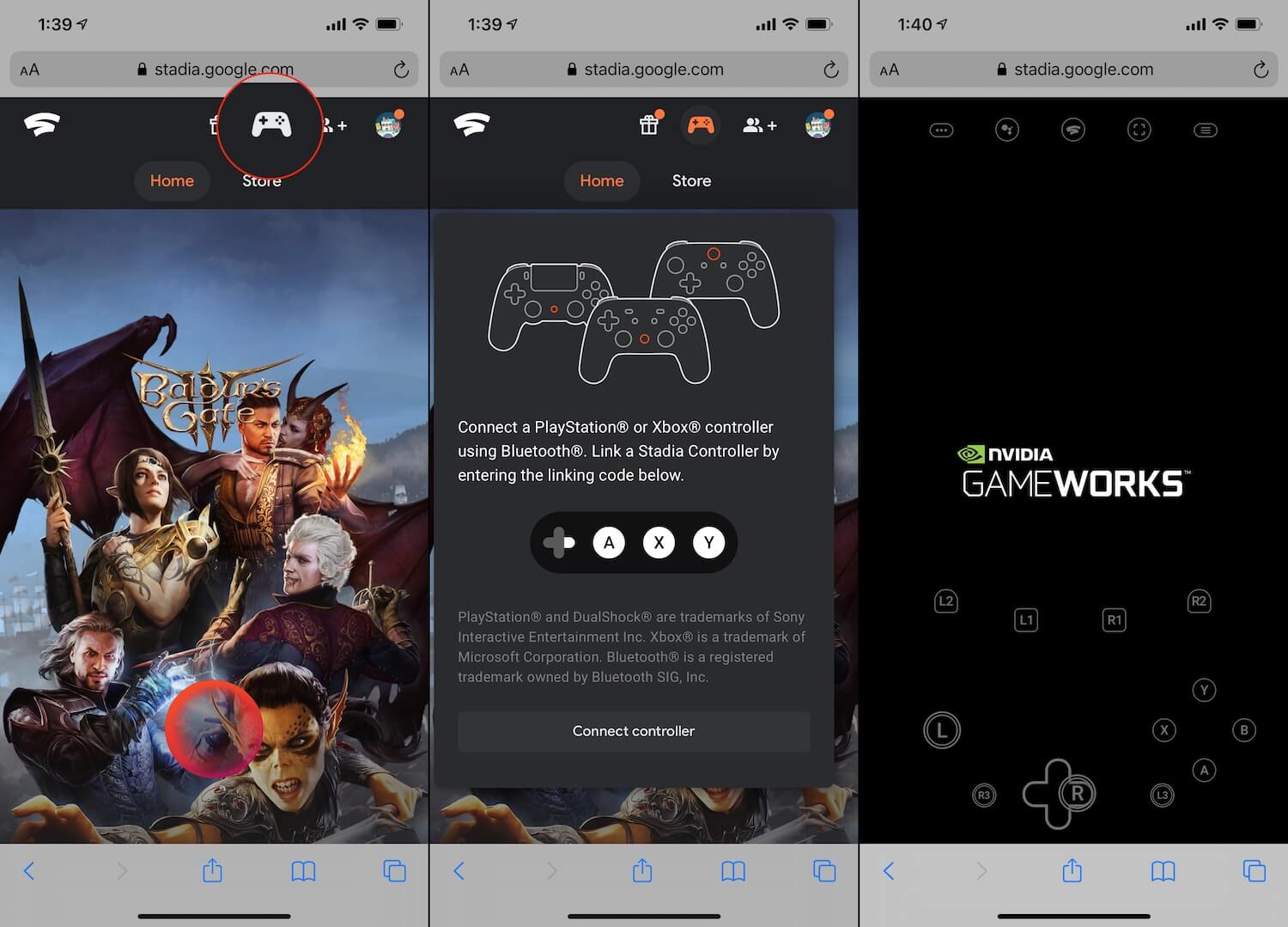 Add Stadia to your Home Screen for a smoother experience

While you can continue playing Stadia right from the browser, you may notice that the app is not truly a full-screen experience. Elements of Safari still appear, which can hinder your playback experience. But since this is a PWA, you can “install” the PWA by adding it to your Home Screen. Here’s how to can add Stadia to your Home Screen for a better experience and quick access. 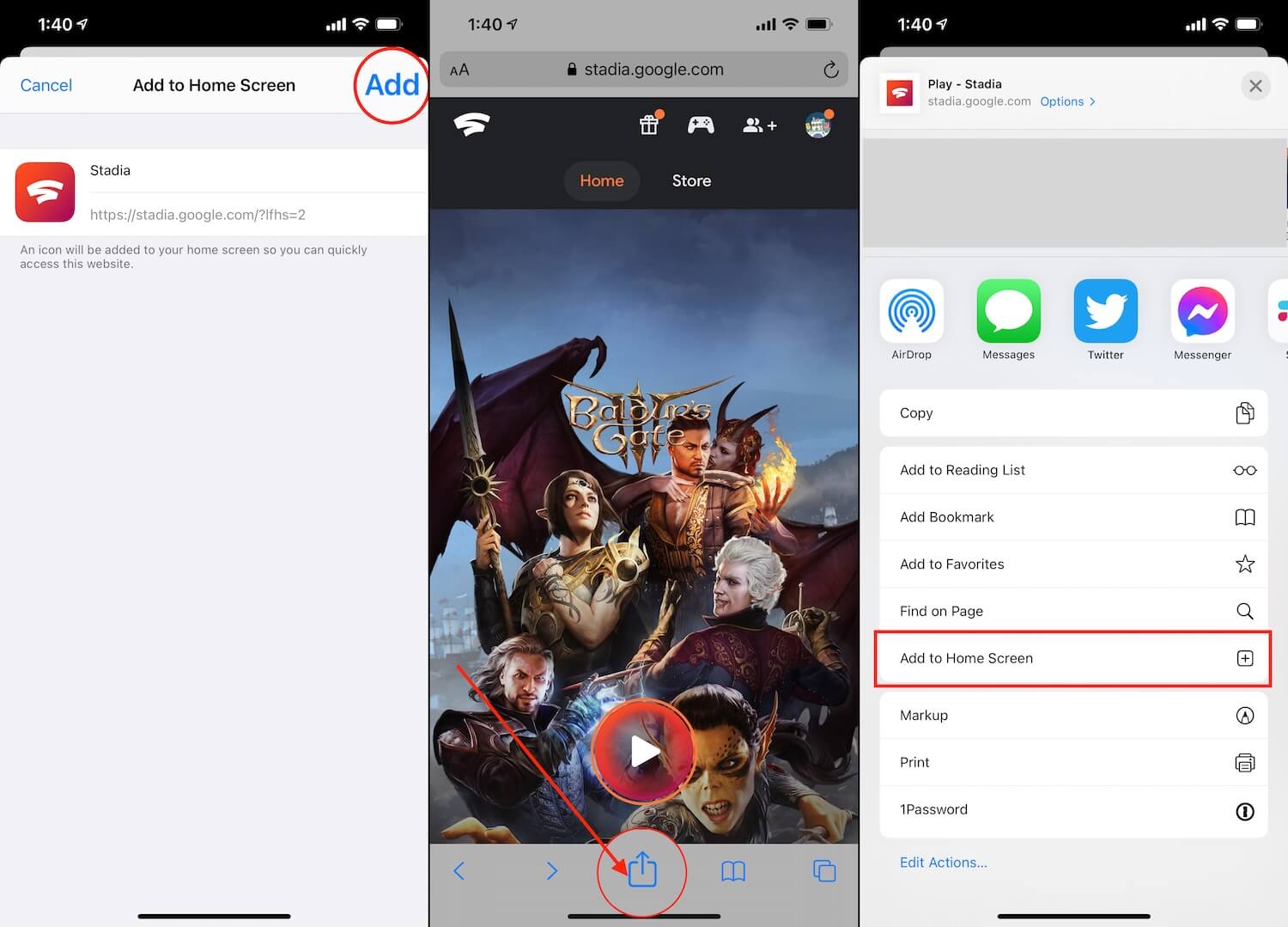 Even though this is a PWA, you can still move it around and add it to your Games folder.

What controllers work with Stadia? 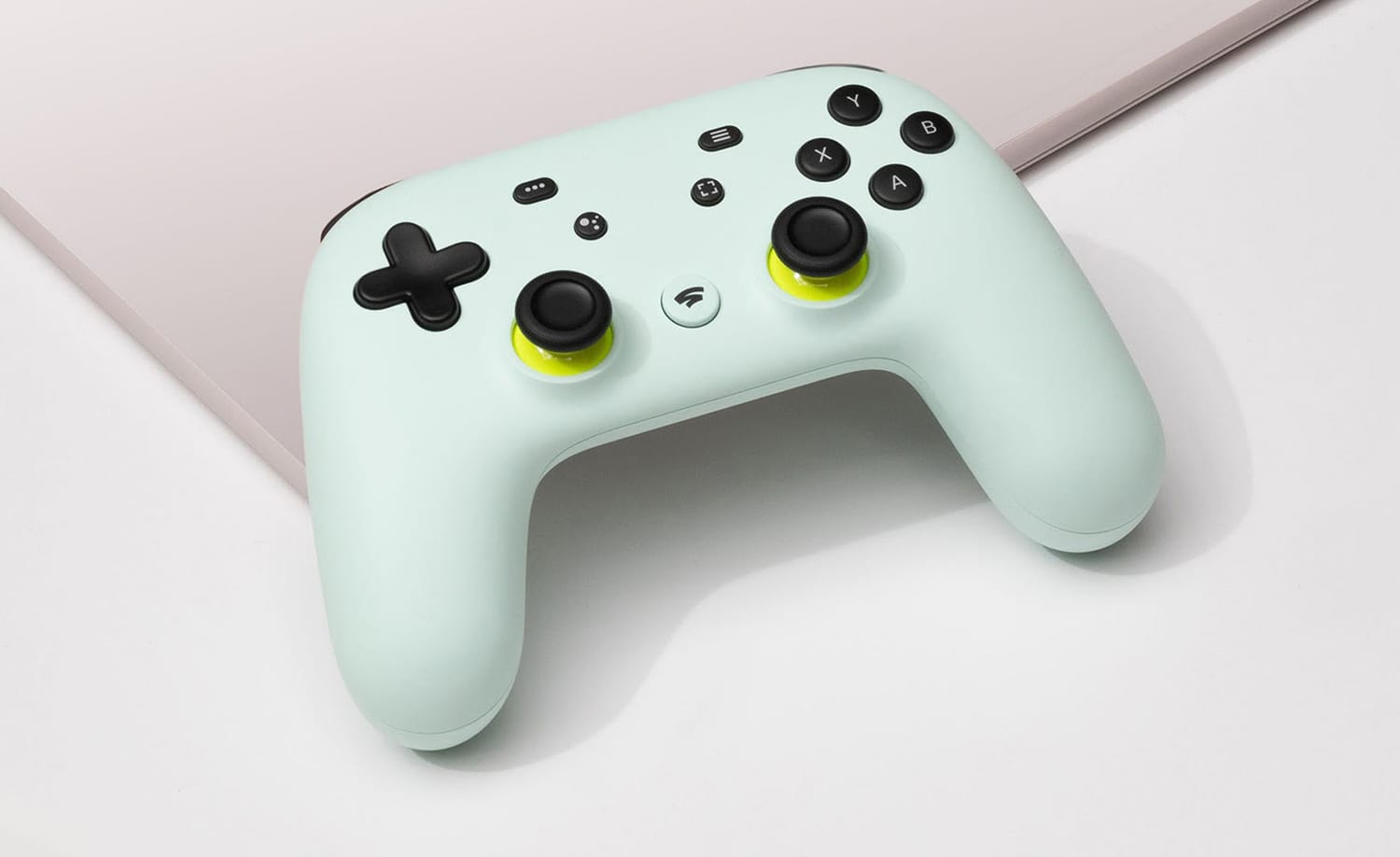 Before you just dive in and start playing Stadia, there are a few controllers that you should check out. While Sony and Microsoft have released their next-gen consoles along with new controllers, those are not yet certified to work with Stadia. That’s not to say that they won’t, as we have seen recent updates bringing support for Sony’s new DualSense controller. However, these are the controllers officially supported by Stadia.

Can you use the Razer Kishi with Stadia? 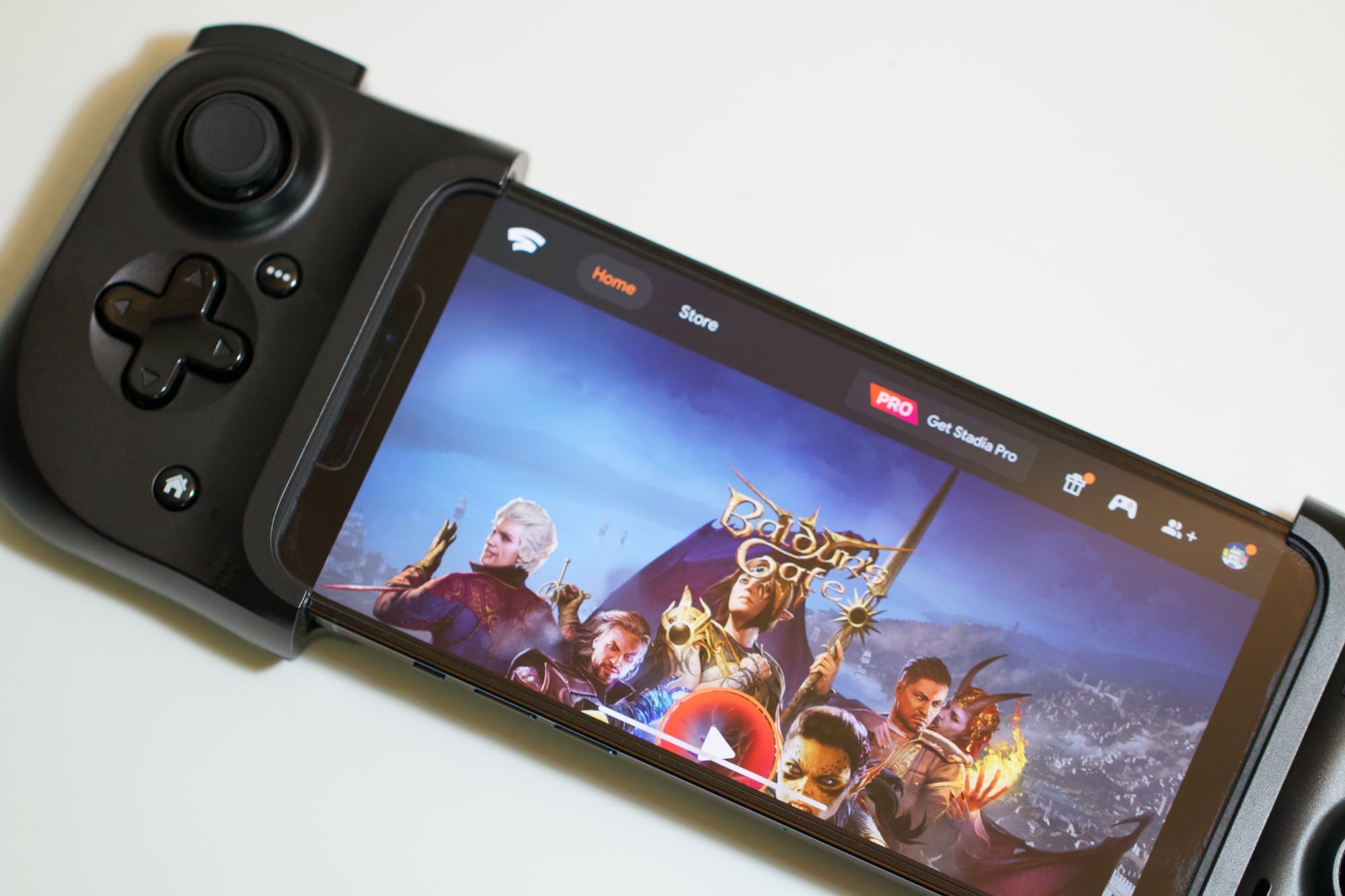 In our tutorial for playing Cyberpunk 2077 on the iPhone, we recommended the Razer Kishi as a potential controller. Instead of leaning towards Microsoft or Sony, the Razer Kishi is an all-in-one gaming controller that turns your iPhone into a mobile gaming beast. So it’s only natural to wonder if the Kishi will work with Stadia.

Well, if you want to get a controller without the need of an additional mount, then you’re in luck. In our testing, we found that the Razer Kishi works perfectly with Stadia on the iPhone. So this is a great and viable option for you to use.

Pair your controller with your iPhone

While it is possible, it’s not really recommended to use the on-screen touch controls for your games. That’s why we always recommend picking up or using a spare controller for your current gaming console. These are the steps you need to take in order to pair your controller with your iPhone or iPad.