You are here: Home / iPhone / Here are the major new camera features on the iPhone 11 and iPhone 11 Pro 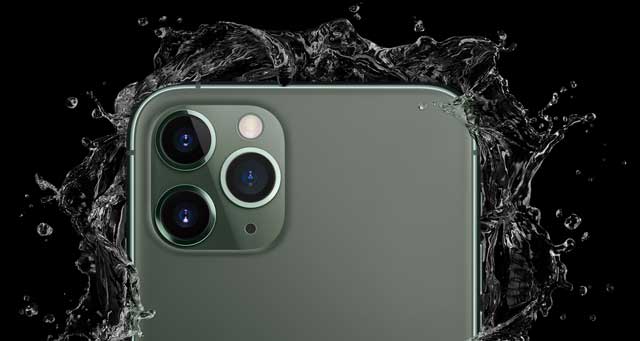 Apple today unveiled its latest slate of handsets, including the iPhone 11, iPhone 11 Pro and iPhone 11 Pro Max. And while this year’s iPhones are packed with new features, the most notable updates are undoubtedly in the camera department.

All three iPhones feature upgraded cameras, from the iPhone 11’s dual-lens camera to the triple-lens setup on the iPhone 11 Pro models. But aside from new hardware, Apple has also introduced a number of advanced computational photography features. Together, they’ll provide the best camera experience in an iPhone to date.

Here’s what you need know about the new cameras and features.

All three of this year’s iPhones feature a brand-new Ultra Wide Angle lens. (It’s worth noting that the dual-lens iPhone 11 doesn’t have a telephoto lens, unlike its OLED stablemates.)

The Ultra Wide camera will let users capture up to four times more of a scene with up to 120-degree field of view. Users will be able to switch between a tight shot, a wide-angle shot and an Ultra Wide shot with just a tap.

That will be incredibly useful for taking wide-angle shots of landscapes and architecture. It’ll also be great for tight locations when you aren’t able to back up anymore to fit more of a scene in an image.

The triple-lens system on the iPhone 11 Pro models will also allow for Wide and Telephoto framing in Portrait Mode, meaning it’s better-suited for taking portrait images of multiple people.

Smartphones typically suffer in low-light situations, which is where computational photography comes in. On the 2019 iPhones, Apple uses a mix of software and hardware to significantly enhance photo performance in dark conditions.

Night Mode will be enabled automatically when the scene is dark enough. And it’ll allow you to actually take images in low lighting without the use of the flash.

Apple says it uses computational machine learning to take multiple shots in Night Mode. It then intelligently fuses them together to create an image that can actually be seen, despite how dark it is.

The 2019 iPhones will get a lot better at taking video footage with a suite of new features and significant upgrades.

For example, there’s now a new “QuickTake” option. Users will be able to quickly tap and hold the shutter button in photo mode to take a rapid video clip (without needing to actually switch into video mode).

The iPhone 11’s dual-camera system will also support Extended Dynamic Range videos at 4K and up to 60 frames per second.

When it comes to the iPhone 11 Pro triple-lens camera, the upgrades are even bigger. Like the iPhone 11, they’ll also be able to shoot in 4K at 60fps. Apple also says it has finely tuned all three lenses to work in conjunction for a seamless video experience.

All three lenses will be recording simultaneously, meaning users will be able to smoothly transition between each of the three lenses while capturing video — allowing for seamless switching between zoom levels and fields of view.

At its September iPhone event, Apple also teased the release of a new computational photography feature it calls Deep Fusion. It’ll be coming in the iPhone 11 Pro and iPhone 11 Pro Max later this year.

Deep Fusion will take advantage of the 2019 iPhones’ A13 chipset and machine learning to perform pixel-by-pixel processing of photos.

The feature relies on multi-shot captures — Deep Fusion will take at least nine separate images and combine them together to create professional-quality shots. Apple says it’ll result in much greater texture, details and reduced noise.

It isn’t clear if Deep Fusion will be available for the iPhone 11. The device uses the same chip as the iPhone 11 Pro but doesn’t have as many camera lenses.

While Deep Fusion is coming later this year, Apple also revealed an update to Smart HDR. It will provide multi-scale tone mapping and will allow the feature to intelligent detect subjects in a frame. That means better and more natural highlights and shadows.

Apple has also given the front-facing selfie camera an upgrade across its 2019 iPhone lineup.

While it’s not necessarily a camera feature, the TrueDepth upgrades will also allow Face ID to work at a wider range of angles and up to 30 percent faster.

Apple has also given the Camera app an update on the iPhone 11 Pro and iPhone 11 Pro Max to create a “more immersive experience.” On the other hand, the company didn’t really detail how it would be different — other than stating that it has been overhauled and features a new font called “SF Camera.”

As far as physical camera features, Apple has also upgraded its True Tone flash to be more than 30 percent brighter.

Apple also highlighted the range of third-party camera apps on the App Store. Presumably, that was an effort to highlight how professional photographers and cinematographers can use the iPhone 11 Pro models.

That includes a major update to Filmic Pro, which will allow for immersive videography capabilities. The update will take advantage of the iPhone 11 Pro’s advanced camera features.

That includes the ability to take multiple videos from the iPhone’s separate lenses at once, with the added ability to switch between them seamlessly. It’ll also let users take front-facing and rear-facing videos simultaneously, which will be great for documentarians and filmmakers alike.