You are here: Home / iPhone / Here’s what your favorite bloggers think of the 2020 iPhone SE

It wasn’t a matter of “if”, but a matter of “when” Apple would be unveiling the 2020 iPhone SE. In unsurprising fashion, the company simply provided a press release, along with some social media campaigning to unveil it’s the latest device.

There were rumors that a release was imminent of a new 2020 iPhone SE, especially after shipping times slipped for the iPhone 8. Now the iPhone SE is here and hopes to carry on the “budget” iPhone for Apple.

Outside of its price tag, the biggest reason for picking up an iPhone SE was the older design that was unveiled with the iPhone 5. With the 2020 iPhone SE, Apple determined that the 3.5-inch display is just not something that is feasible anymore. Instead, the SE now sports a much-larger 4.7-inch Retina HD LCD.

This display is the same that was found in the iPhone 8. In order to pack a new display, Apple has adopted the iPhone 8’s design for the 2020 iPhone SE. The move should come as no surprise, but for those who loved the “boxy” design of the original SE will be a bit disappointed.

Keeping with the design of the iPhone 8 allowed Apple to continue using TouchID. In a world where bezels and fingerprint scanners are disappearing, the inclusion of TouchID is extremely welcome.

Some other features now available on the SE include IP67 water and dust resistance, Fast Charging, and wireless charging. However, for those who want faster charging speeds, you’ll need to make sure you are using the appropriate charger. This means you’ll have to spring for Apple’s 18W charger if you want to go from 0% to 50% in just 30 minutes.

Oh and did we mention the price? The 2020 iPhone SE starts at just $399. That’s even cheaper than a refurbished iPhone 8 that Apple is still selling for $469. Pre-orders start on April 17th, with the 2020 SE officially going on sale on April 24th.

The 2020 iPhone SE was highly-anticipated as many were hoping for Apple to “wow” everyone with a new budget device. So we have rounded up some of the initial thoughts from a few different tech-bloggers and YouTube personalities. 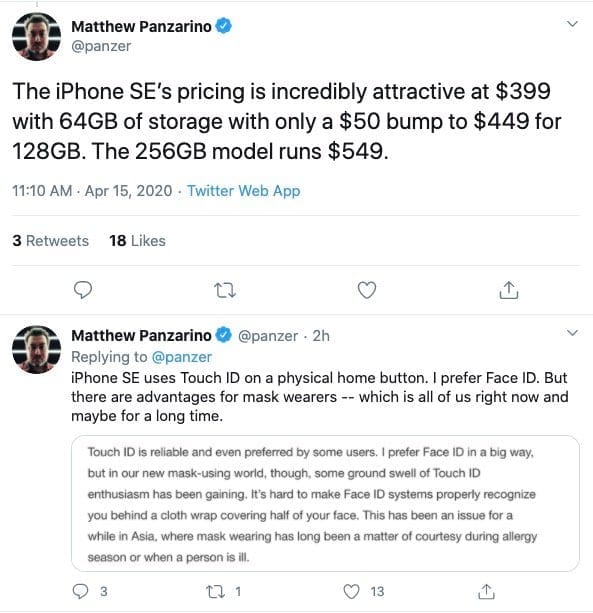 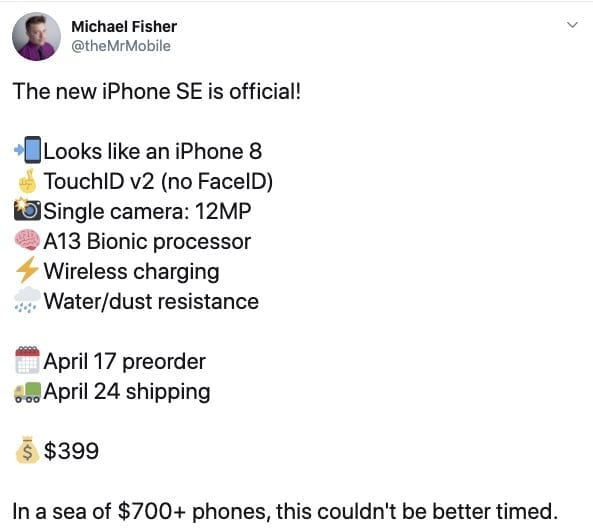 On the announcement piece at iMore:

“…But for everyone in every tech nerd’s family who isn’t a tech nerd, who wants things to just slow down, who comes due for an upgrade and just wants something that’s familiar, recognizable… exactly what they already have… only better.”

Our thoughts on the new 2020 iPhone SE

Personally, if it weren’t for Apple opening pre-orders for the new iPad Pro Magic Keyboard, I would be pre-ordering one of these. I’ve been on the Apple flagship train for years, and it would be interesting to use an iPhone with this design again.

Around the interwebs, we’ve seen the following comparisons made:

This is a pretty good summary of what we think about the iPhone SE 2020. But what keeps sticking at me is the fact that Apple included the same chipset as its flagship lineup. Now, thanks to Steve Moser, we know that not all the same features are available.

This includes the lack of an Ultra Wideband chip, Night Mode, and Audio Zoom. But sacrifices had to be made, especially if Apple wanted to launch a new smartphone under $400. We also would have liked to see at least one additional camera added to main camera module. Having just a single camera to take pictures is a bit disappointing.

While the new iPad Pro Magic Keyboard is surely amazing, it’s priced at $350. It’s a keyboard with a trackpad, so you’re definitely paying for the Apple tax and simplicity. However, for just $50 more, you can get the new 2020 iPhone SE and that’s absolutely incredible.

We’ll have to wait and see how the phone actually performs once it’s in the hands of the users. So stay tuned and we’ll be sure to share some of our thoughts and feelings on the device after the “new wow” factor has worn-off.

Will you be getting the new 2020 iPhone SE for yourself or a loved one? Let us know in the comments if you are, and why you are deciding to do so!