You are here: Home / How-to / How to Hide iPhone Apps on iOS 9.2 Without Jailbreak

I have seen so many iPhone and iPad users complain about all the stock applications that were installed by default on their device. Some of these have its own unique features while others are just useless and add a bit of annoyance into the home screen.

Apple doesn’t have a built-in functionality where iOS users can quickly hide any applications that they don’t like. Instead, some users are motivated to jailbreak their iPhone or iPad in order to quickly hide their iOS applications. In the past, there were several cases where you can temporarily remove your apps from the home screen without the need to jailbreak.

Unfortunately, Apple quickly found out about the exploit and patched it on their next firmware release. For iOS 9.x users, there is still another chance for you to hide any applications on your device and Cydia is not required.

A YouTuber has found another method of hiding iPhone applications and this procedure can be applied on any iOS 9 device even iOS 9.2. 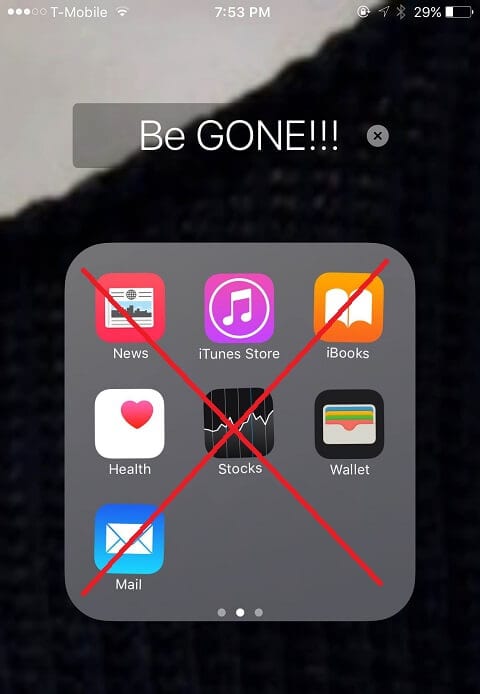 How to Hide iPhone Apps on iOS 9 – 9.2 Without Jailbreak

Step 1: Pick out all the applications that you wish to hide and put them in the same folder

Step 2: Tap and hold on the first app and move it to the Folder’s second screen

Step 3: Repeat the same process for the Folder’s third screen but don’t let go this time.

Step 4: While you are holding on the app, press the Home button

And that’s how easy and quickly you can hide your iPhone applications. Keep in mind that any apps that you hide will continue to show up through Siri search.

There is only one way to unhide and all the apps that you temporarily removed will display again all at once. That is by rebooting your iPhone or iPad.