While Apple has been in the smart speaker game for a few years now, the company is still behind the curve. Apple fans and Siri faithful have been wishing for a smaller and less-expensive version of the HomePod to be introduced.

Apple granted those wishes earlier this year with the introduction of the HomePod Mini. This small speaker is designed to be placed in various rooms around the house. Well, that is, if you want to have Siri everywhere and anywhere. Others, like myself, will gladly set the HomePod Mini on a desk and be content.

Big sound in a small package 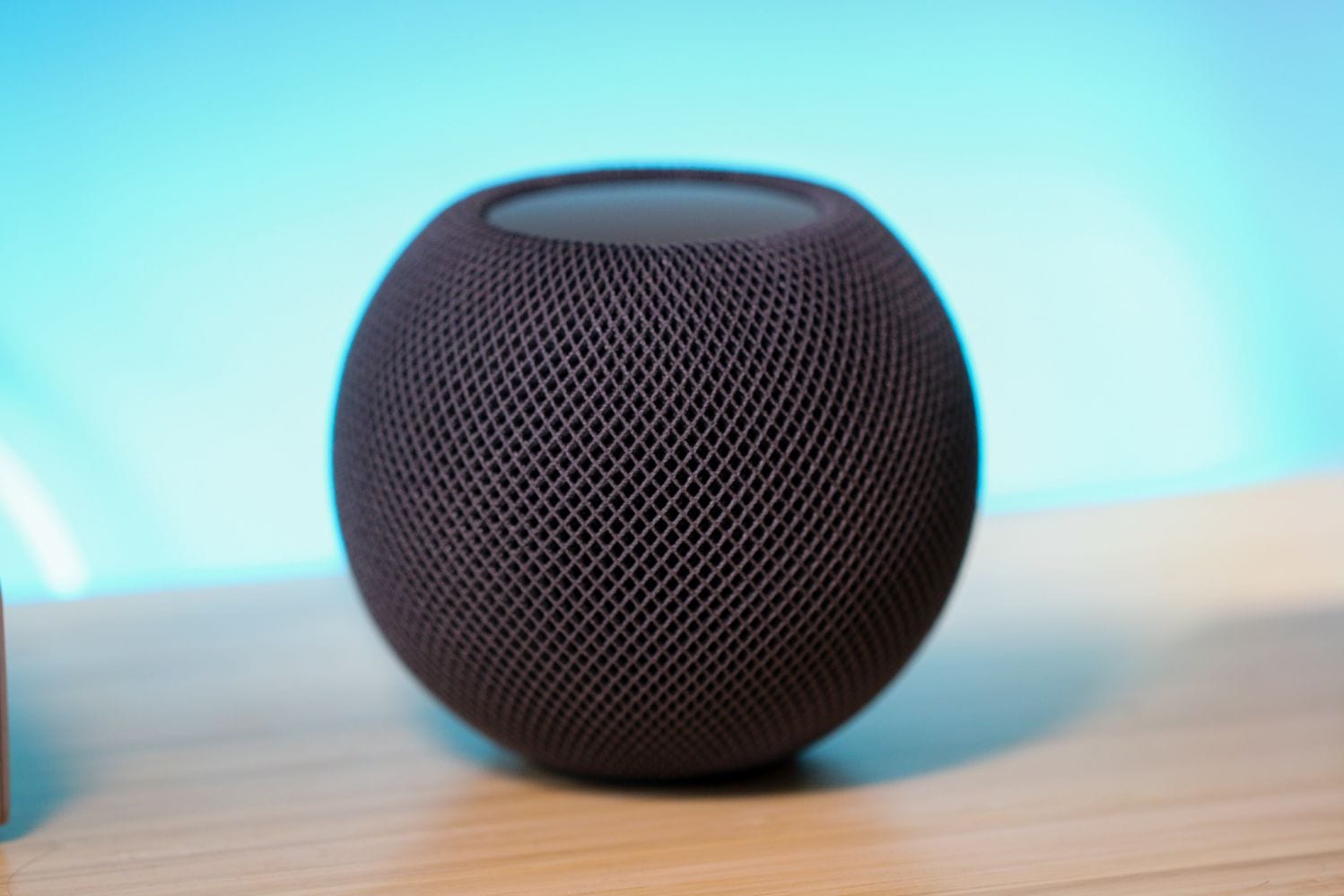 I’m no audiophile, but my aging ears are capable of discerning a “good” speaker from a “bad” one. There are just certain things that you can discern from other speakers, especially when they are placed right beside one another.

That’s what we did with the HomePod Mini and a few extra speakers. The competition we tested out included the Nest Audio, Nest Mini, and Amazon Echo Dot. Much to our surprise the Mini sounded better than all three, although the gap between the Nest Audio and HomePod Mini was practically a toss-up.

Plug in your HomePod Mini, unlock your iPhone to get it set up, and start playing away. This little speaker is ready to listen to your commands and play any music you want to. Provided that you’re using AirPlay 2 at least. It seems that Apple just doesn’t care about Bluetooth, as evidenced by the multitude of issues that have been plaguing the Bluetooth chip on the Mac for years. 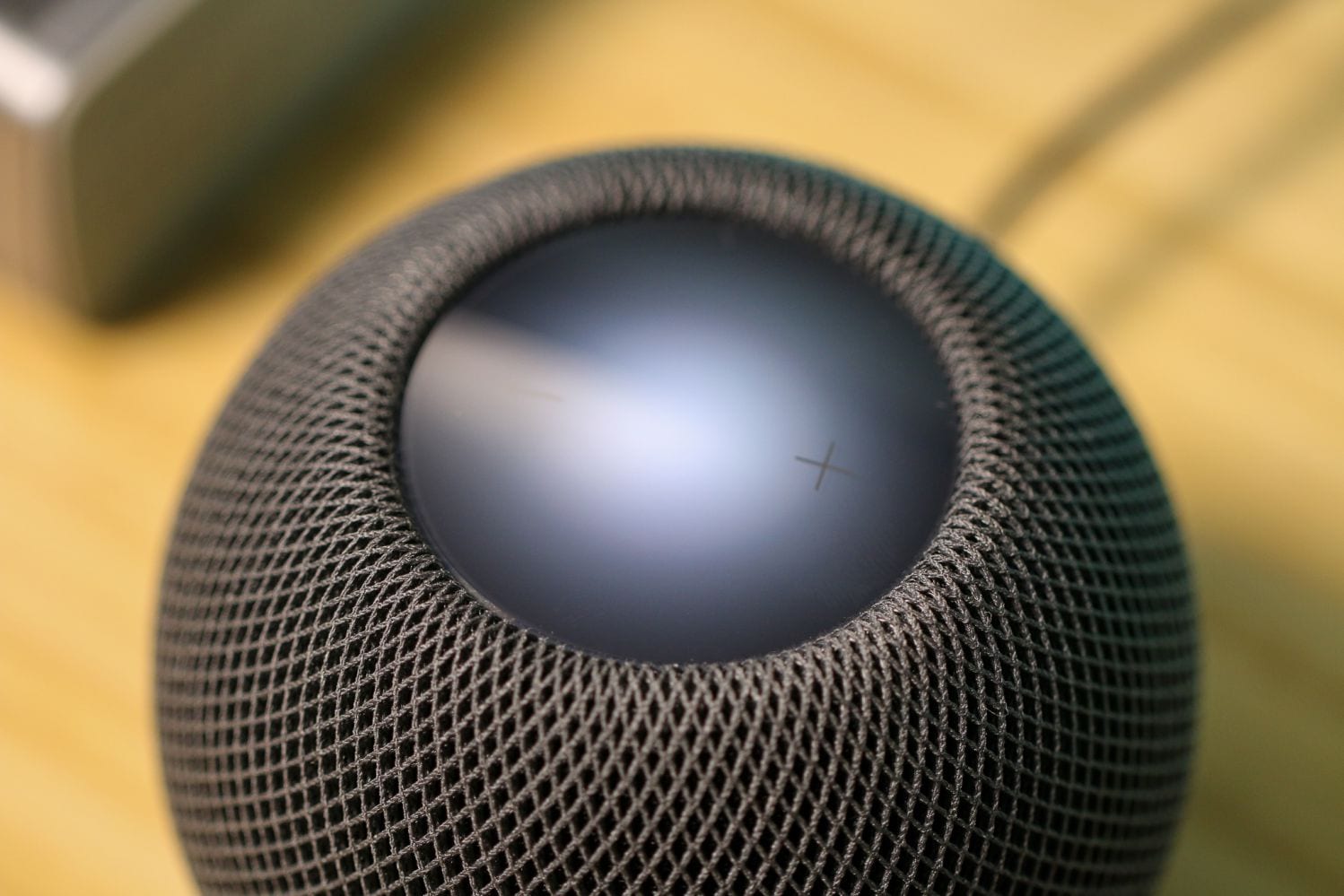 Nevertheless, the HomePod Mini can handle just about everything you throw at it. Plus, you can create a surround sound experience when creating a studio pair with another HomePod Mini. Unfortunately, we have yet to be able to test this out just yet. But, the Mini does sound pretty darn good when playing content from the Apple TV here in the office.

Perhaps the best part, aside from the non-removable cable, is the footprint of the HomePod Mini. The speaker measures in at just 3.3-inches high and 3.9-inches high, making it perfect for a desk top or side table. 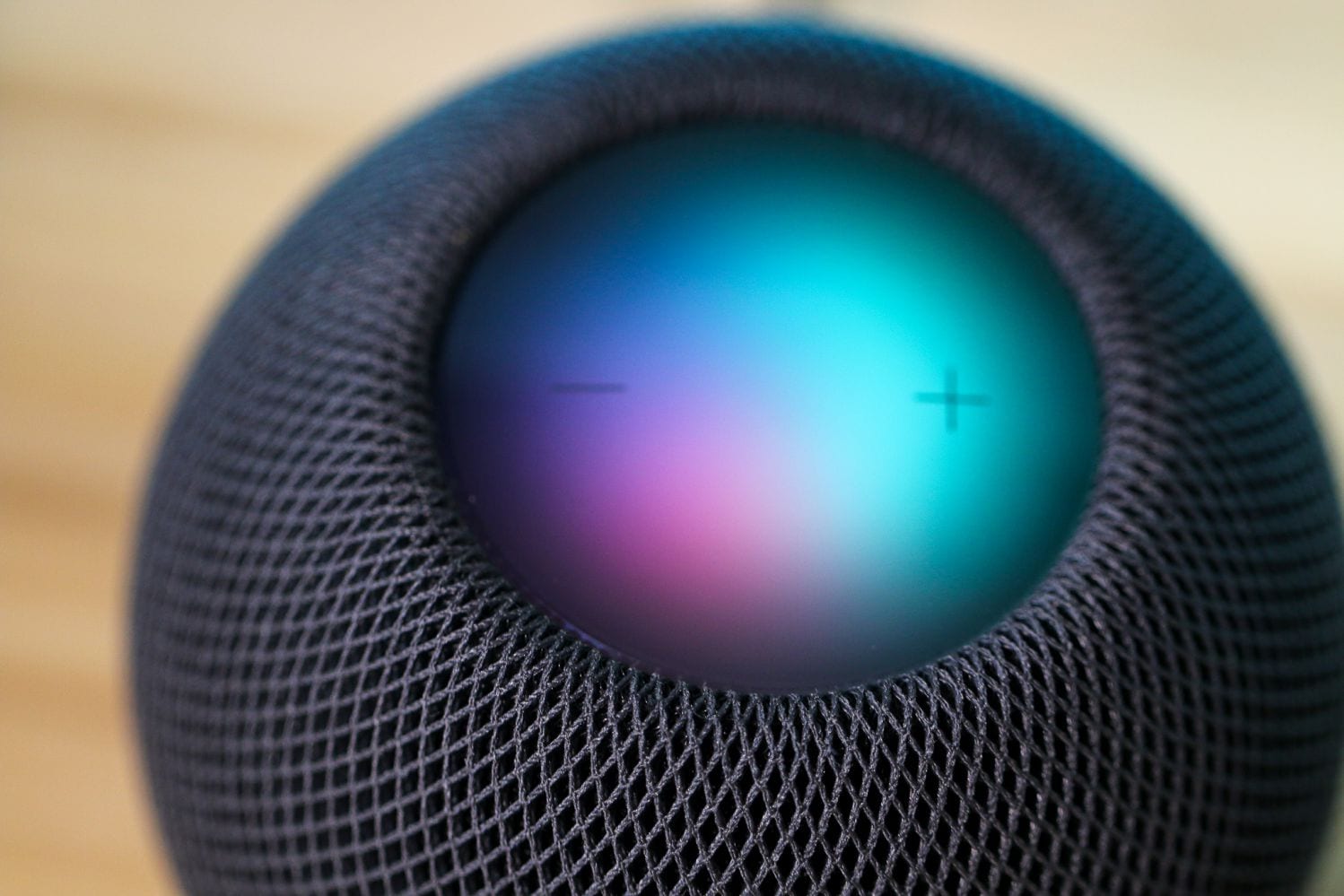 As is found on the original HomePod, some of the magic for the Mini starts with the touch-sensitive display on the top. Admittedly, the colors are more vibrant while you’re interacting with the Mini compared to its larger brother. But the controls are the same nonetheless.

And that’s all fine and dandy, but the appeal of the HomePod Mini, or any smart speaker, is not needing to touch it. Apple introduced a new handoff-like feature, making it possible to transfer the audio from your iPhone, straight to the speaker. No fiddling around with the output sources in your music app. Just hold your phone near the front-corner of the HomePod Mini and the music will start playing on the speaker instead of your phone. Oh, and when you’re ready to leave the room and want to bring the music with you, hold your phone nearby and transfer the music back. 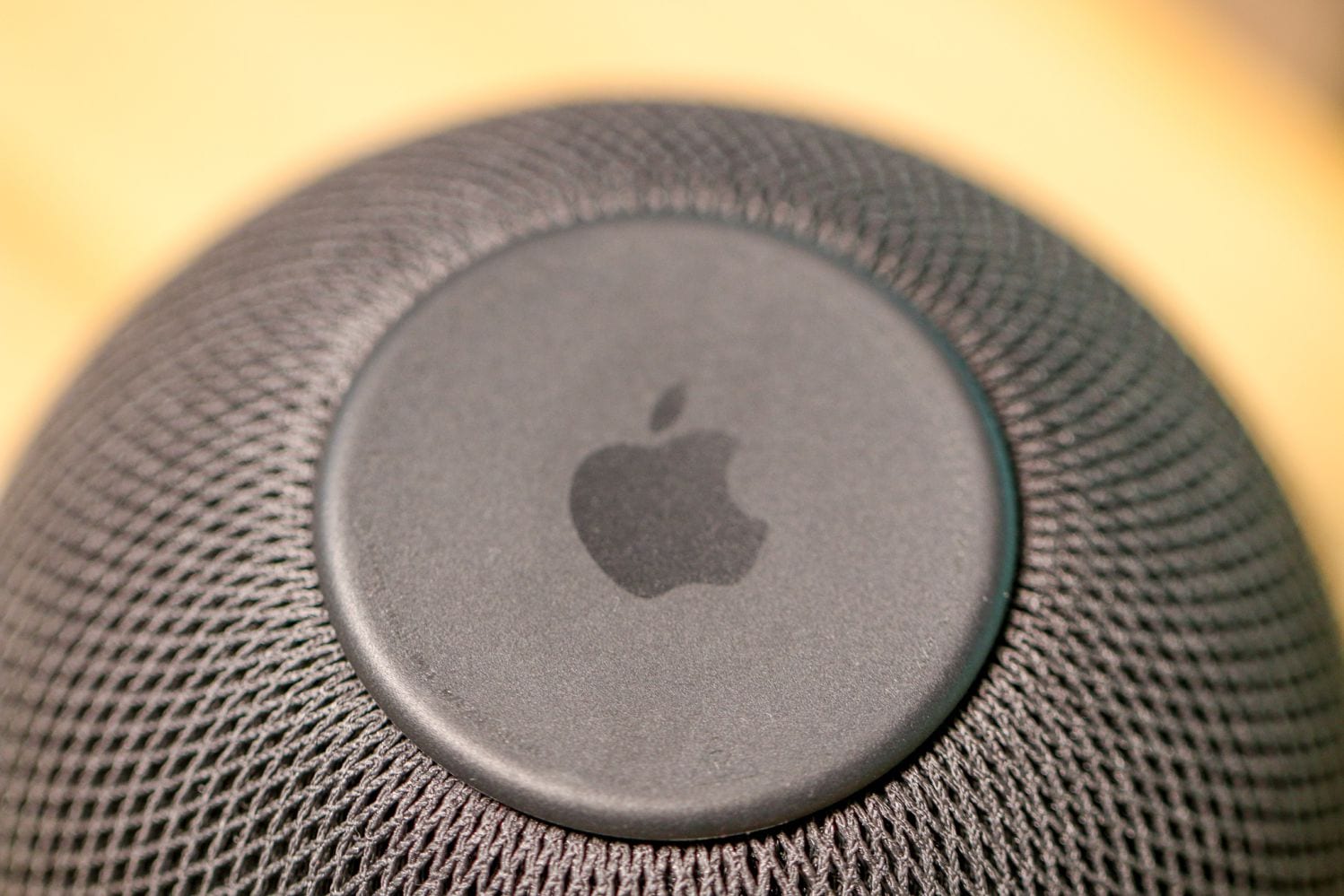 Intercom is another extremely useful feature, primarily for those with a HomePod in different rooms. Send a message from the kitchen to let the kids know that dinner is ready. Or to remind them to clean their room. Send an intercom to all of the speakers in the house to let everyone know that the movie is about to get started.

The “Apple Magic” is real with the HomePod Mini, and it’s making us more excited to see what could come from another iteration of the larger HomePod. Software updates will continue to improve features, while Apple’s hardware will continue to work quite well for the years to come. 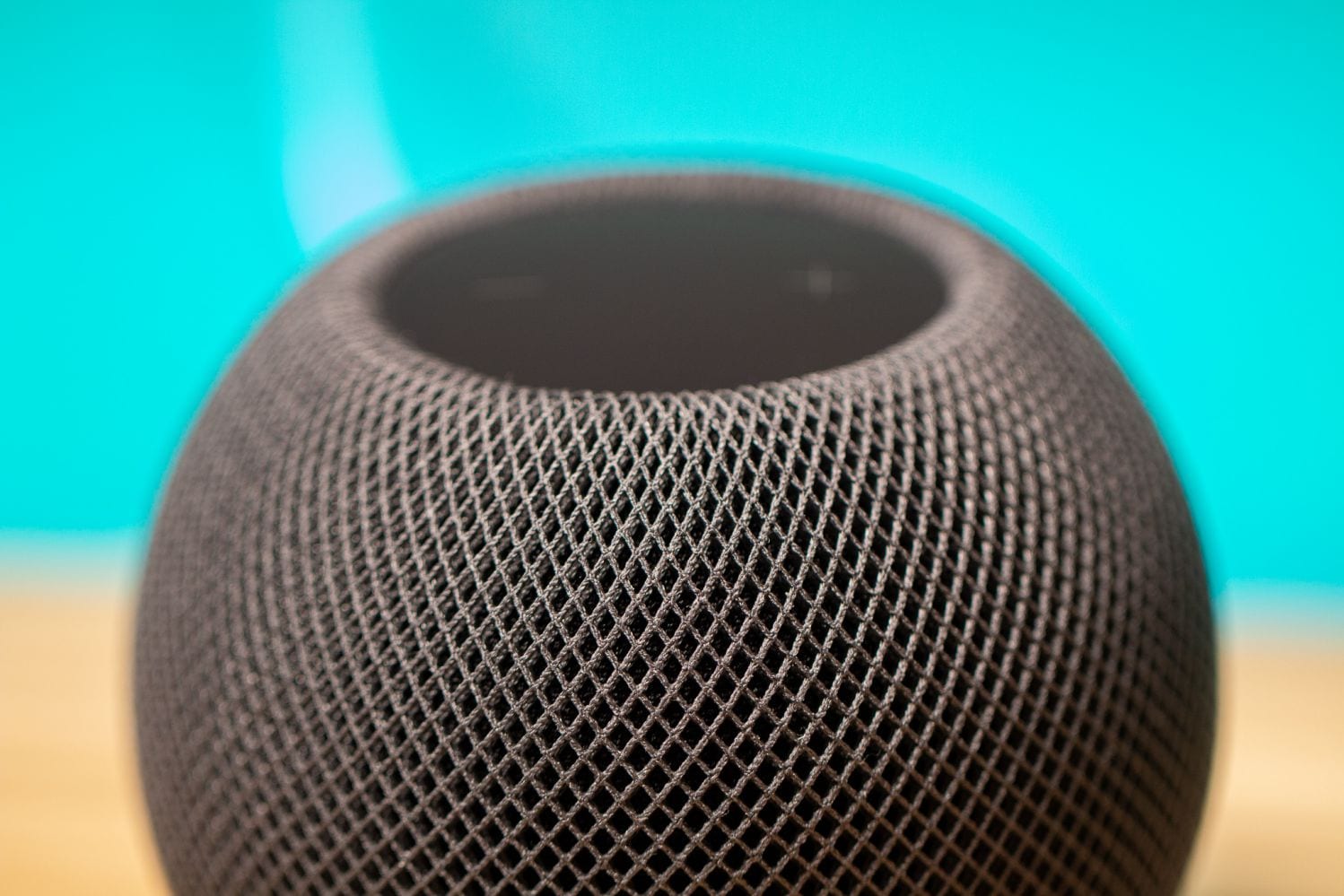 Before publishing this review, the HomePod Mini was going to get some negative remarks in regards to the necessary charger. Apple ships a 20W USB-C wall adapter in the box, but you likely already have one of the 18W adapters hanging around. At launch, you would not have been able to use the 18W adapter, which left a red/orange circle on the top of the display. That’s since changed with HomePod Software version 14.3, as 18W support has been added.

As it turns out, since the Mini uses USB-C, you can now use the HomePod Mini with a portable power bank. This is as close as you will get to having a HomePod Bluetooth Speaker, but hey, at least it’s portable now. You will need to have a WiFi connection in order to actually use the Mini on the go. 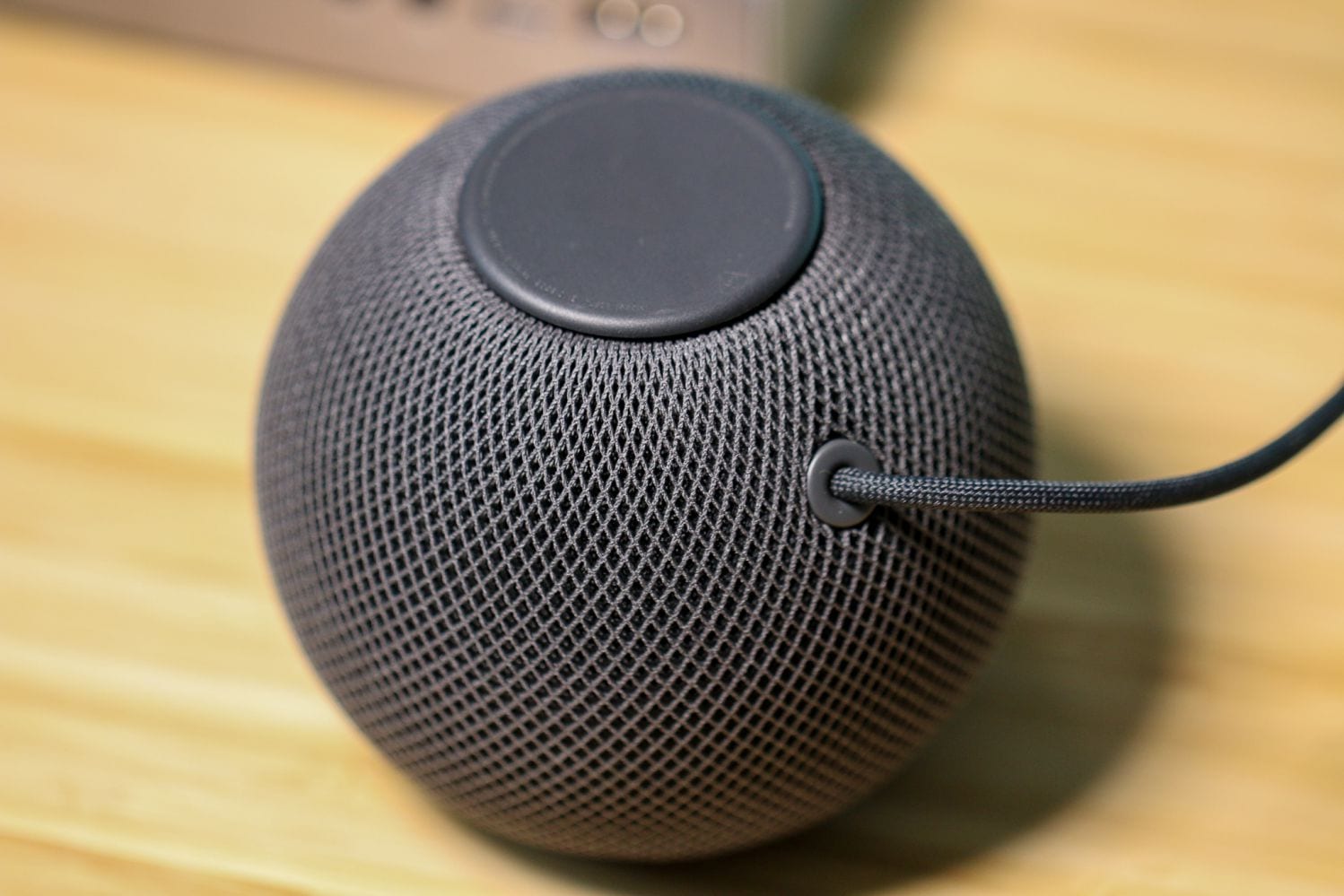 While there’s a lot to like about the HomePod Mini, not everything is perfect. Our biggest gripe about the Mini is the inability to create a stereo pair with a regularly-sized HomePod. Of course, the sizes are different and one speaker is better than the other, but we would have at least liked the option.

Another issue is that the power cable is non-removable. Meaning that if something happens to your cable, you have to replace the entire speaker, and not just grab a new cable. This is an annoyance, but not something completely unexpected from Apple.

The final downside to the HomePod Mini comes down to the pricing. Yes, it’s one-third the price of the regular HomePod, which seems to be a great value in a vacuum. However, when you start looking at the competition, the vacuum disappears completely.

For reference, the Nest Mini and Amazon Echo Dot can both be had for just $50. Plus, both of these can regularly be found on sale for much less. If you time it right, you can pick up either of these for around 50% off the retail price. So when looking at things from that perspective, the Mini is rather pricey at $99.

Nonetheless, it’s a price you are likely willing to pay if you want to put have Siri in every room.

Putting it plainly, the HomePod Mini is a fantastic mini speaker. It sounds wonderful, makes it easy to go from listening on your phone to using the speaker, and it’s equipped with Siri? Really? What more could you ask for?

Oh and that $99 price point? If you are firmly entrenched in the Apple ecosystem, or just want a sweet speaker for your Mac, the Mini is the way to go. The HomePod lineup is finally exciting again, although we can be sure it won’t be long before a new (regular) HomePod is released.

What do you think about the HomePod Mini? Have you already picked one up for yourself, or have you been holding off to see if Apple got it right? In our opinion, Apple did.