You are here: Home / How-to / How to create Smart Albums in Photos on macOS Catalina

MacOS Catalina has taken a lot of his ever since it was released, but one mainstay and a source of little frustration has been the updated Photos app. In addition to creating the best Smart Albums ever, Apple crammed even more new features into the app than ever.

These features make Photos the de-facto best way to manage your pictures and videos taken from your various devices. Today, we’re going to take a look at one way to make your library of content even more organized.

For better or worse, macOS Catalina has been a steady update for most people. While a lot of focus was put on Catalyst apps like Music, TV and Podcasts, the Photos app for Mac saw a big update.

These are just some of the headlining new features:

These new features get us closer to some type of parity between the Photos app on iOS and on the Mac. And in some instances, makes Photos on the Mac an even better way to organize your more important memories.

While it’s all fine and dandy to be able to go through and create albums, there are times where you want the Mac to do the work for you. That’s why the Photos app includes the ability to make Smart Albums.

These albums are created with different “rules” and guidelines to follow in order to show the right pictures and videos that you are looking for. Here are the steps to creating your own Smart Album: 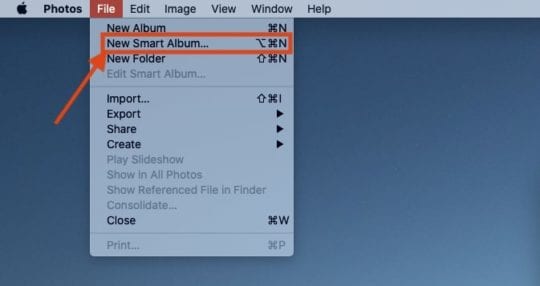 After selecting to create a new Smart Album, you are provided with a few options. These include changing the name of said album, along with setting the “rules” for the album to follow.

What makes Photos even more incredible, especially if you take photos/videos with different cameras, is that you can sort by specific camera qualities. These include the following:

With these Smart Albums, you can truly sort and create albums based on a number of different categories. These otherwise would not be able to be found, without digging deep or trying to remember what photos were taken with what cameras.

One common frustration is that while Photos makes it easy to find “matched” people in pictures, it’s not great at identifying all people. That’s where creating a Smart Album for unmatched people is most useful so that you can either delete those, or add photos to a different album easily. 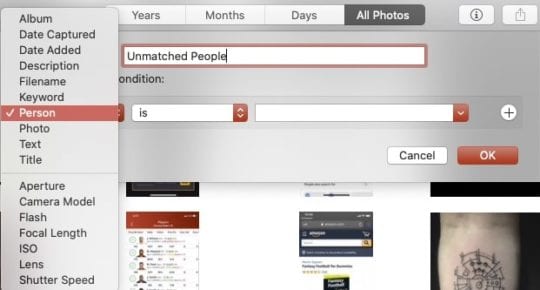 Thanks to the fact that Photos is so powerful, it is capable of recognizing much more than the subject in the photo. If you want to file things down even more, you can easily add more rules to the smart album.

After these rules are created, click the OK button in the bottom right-hand corner. Then, a new album will appear in the sidebar with the name that you gave it earlier. This gives you quick and easy access to the album, and you can even access it from your iPhone or iPad.

There are a lot of neat and useful features that Photos has to offer and they are easily discovered by tinkering around in the different menus. If you run into issues with Photos on Catalina, sound off in the comments below and let us know.

Additionally, let us know some of your favorite “Smart Album” creations to find unique photos and videos in libraries. If you have problems creating albums of your own, let us know and we’ll be glad to help!