You are here: Home / Apple Services / How to Download Songs to Your Apple Watch

Not only is the Apple Watch one of the best innovations we’ve ever seen, but it’s also capable of so much more than just showing your notifications. It’s well-documented that the different health and fitness tracking features packed into the Watch are top-notch. But if you want to leave your iPhone behind and still have access to your favorite playlists or albums, then you’ll want to know how to download songs to your Apple Watch.

How to Download Songs to Your Apple Watch Using iPhone

Being able to have your favorite playlists available wherever you are with your Apple Watch is extremely convenient. This, along with pairing your AirPods with your Watch makes for an unstoppable combination for those times when you want to leave your iPhone behind and go for a run. Or, if you need to leave it in your locker at the gym, you can still listen to everything you want without hesitation.

In true Apple fashion, there are multiple ways for those who trying to figure out how to download songs to your Apple Watch. The first of which is definitely easier, not only for being able to use the larger screen, but you’ll need to grab your iPhone to get started: 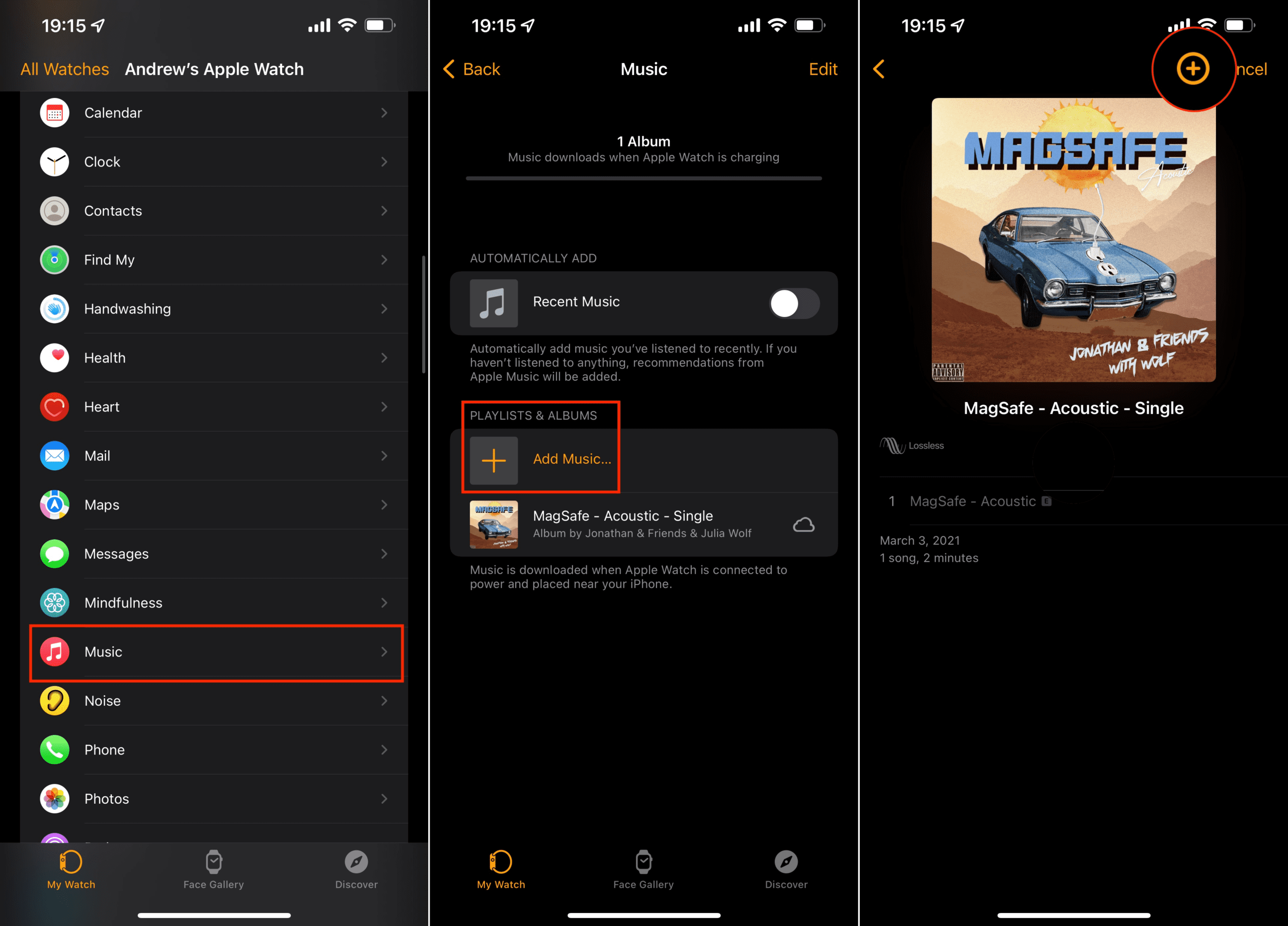 As soon as you select the playlists or albums, they will appear in the Music app on your Apple Watch. However, Apple notes that the music won’t actually be downloaded until the next time that your Watch is on the charger and your iPhone is nearby.

Something else to make note of is that you are currently unable to download individual songs to your Watch. Instead, Apple forces you to use playlists, but a workaround for this is to create various playlists comprised of a single song. It’s definitely an annoyance, so we’re hoping that Apple changes its mind with this in a future watchOS release.

It’s definitely not as convenient to download songs to your Apple Watch from your wrist, but if you’re in a pinch, you can do so. Here’s what you need to do:

Similar to using your iPhone to download songs for your Apple Watch, the playlist or album won’t be available offline until the Watch is placed on the charger. Until then, the music will be streamed, just like any other non-downloaded song in your Apple Music library.

How to Remove Songs From Your Apple Watch on iPhone

32GB may seem like a lot of space for music and apps, but you would be surprised how quickly that can get filled up. This means that you’ll likely have to prune the playlists and albums that are available on your Apple Watch at any given time. In the event that you need to remove songs from your Apple Watch, here’s what you can do using your iPhone: 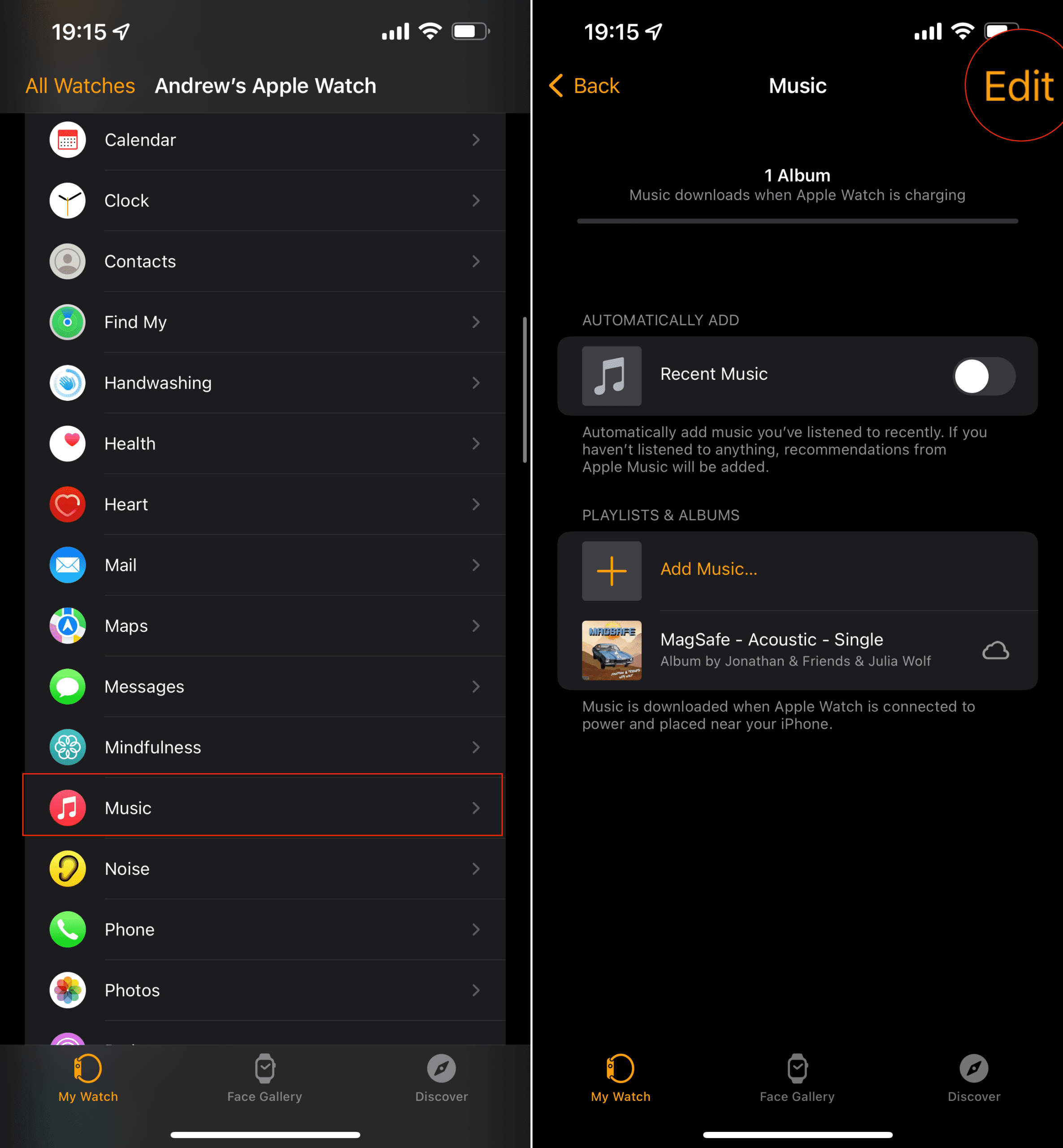 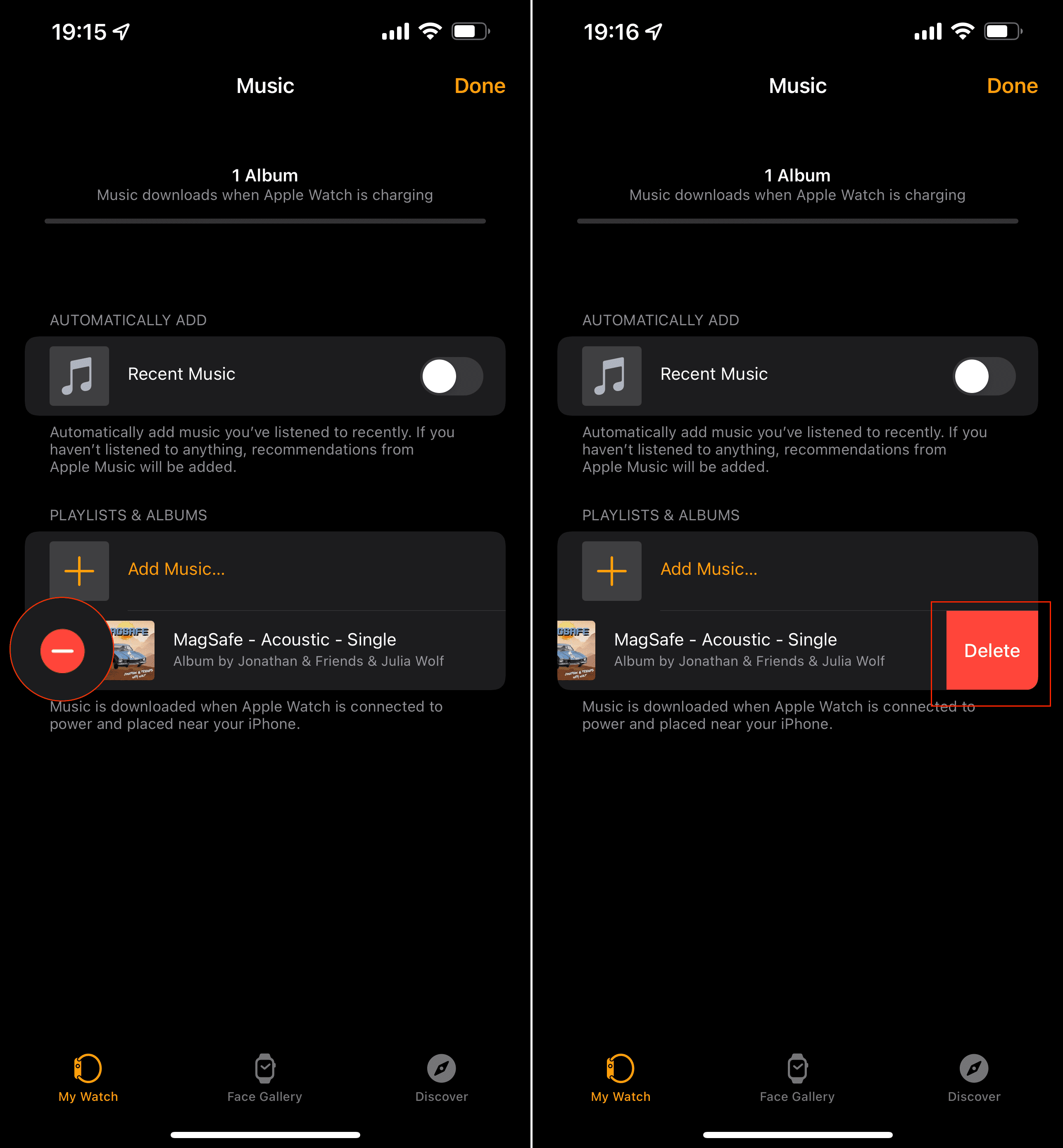 Thankfully, if there is music that you synced from your iPhone to the Apple Watch, those playlists and albums will remain on your iPhone. This ensures that you still have access to whatever it is that you want to listen to, without losing access entirely.

How to Remove Songs From Your Apple Watch Directly

There’s a bit of a difference in the options to remove songs, as there are actually two choices. By selecting Remove Download, you’re simply just removing the playlist or album from being downloaded locally to the Apple Watch. Most of the time, this is the option that you’re going to want to select if you are just trying to free up some space.