You are here: Home / How-to / How to Use Musish to Listen to Apple Music on Any Web Browser

Apple Music is a solid choice among music streaming services. But unlike most of its competitors, it still doesn’t have a browser-based web player.

That can be a problem, depending on how you use Apple Music. If you’re using your iPhone or a PC with iTunes installed, you should have no problems.

But what if you’re on a work computer or you’re running an operating system like Linux? It’s in these cases that having a web client is a great option.

While it isn’t associated with Apple in any way, it uses an Apple API for authentication. The interface is also extremely clean and intuitive in a way that’s reminiscent of Apple’s platforms. It looks exactly like what you’d expect an Apple Music web client to look like.

It’s also completely free to use and is available on any computer that can run a web browser — that includes Macs and PCs running macOS, Windows or Linux.

In other words, if you’re looking to stream Apple Music on a browser, it’s probably your best choice.

Musish is still in an open beta mode, and its developers are actively seeking feature suggestions and feedback via GitHub. In the future, the team hopes to add features like mobile compatibility, dark mode, and a better Browse section.

To actually use Musish, all you need to do is go to the website and login with your Apple credentials. (If you’re concerned about security, don’t worry. We’ll get to that in a second.)

Once you’re logged in, you’ll see some standard Apple Music features. In the upper-left corner, there will be the usual For You, Browse, Radio and My Library tabs.

While some features are fairly streamlined compared to the official Apple platforms, most of them still function exactly the way they would on first-party players. 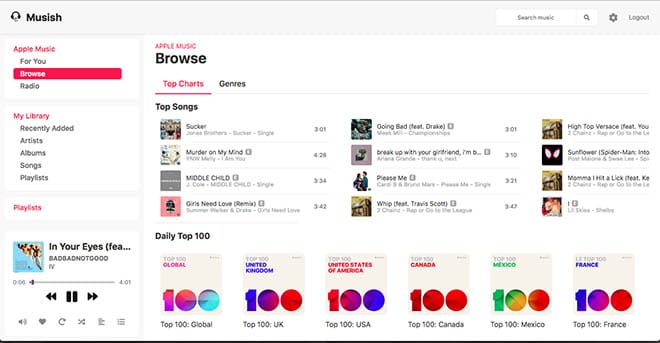 There are, of course, some features that are currently unavailable. That includes social features and radio. But as we mentioned, some of those may be added in future updates to Musish.

A Note About Security 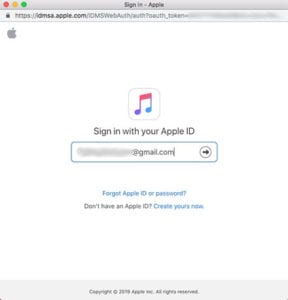 It’s natural to feel a bit concerned about any platform that requires you to enter your Apple ID email and password. But rest assured that Musish is very secure.

As mentioned earlier, Musish uses an official Apple API and authentication is handled by a separate window logged into an official Apple.com domain. That window uses a token to allow a user to use Apple Music on a browser, but only with a user’s explicit permission.

Musish doesn’t have access to this domain or anything typed on it. The developers have made it clear that they don’t request, log or gain access to any user information.

There’s another new beautiful app that has been getting a lot of play recently. Its called Soor and it also allows you to listen to Apple Music. Its a feature rich music player specially made for the iPhone and integrates very well with Apple Music.