You are here: Home / Apple Watch / How to Use Siri Raise to Speak in watchOS 5

Across Apple’s various device, using Siri is usually a cinch — it just takes a button press or a simple key phrase. Apple Watch users have longed for a raise to speak feature since the first Apple Watch launched with Siri! And now it’s finally here with watchOS 5–Series 3 users and above.

But invoking the digital assistant is going to get even easier and more seamless. You’ll no longer have to press the Digital Crown or say “Hey Siri” to activate it. Instead, thanks to a new feature in watchOS 5, you just need to make one simple gesture.

That feature is called Raise to Speak, and it pretty much does exactly what it says -you raise your wrist toward your face to invoke Siri.

From there, you can just begin speaking your command. It doesn’t get much more frictionless than that. With that being said, there are a few other things you should know about the feature.

How to Enable Siri Raise to Speak

Raise to Speak for Siri is on by default in watchOS 5. But it might have gotten switched off inadvertently, so you may want to double-check the setting.

Raise to Speak works with Apple Watch Series 3 and above

How to Use Raise to Speak

The whole Raise to Speak feature is meant to be easy, so there’s not really a lot to explain.

Using Raise to Speak is literally a two-step process

If the feature triggered correctly, then Siri should be automatically listening to your command. It’s that easy. Just takes a couple of seconds for Siri to come back with your sports updates.

No more ‘Hey Siri.’ Merely bring the watch close to your mouth and request information. 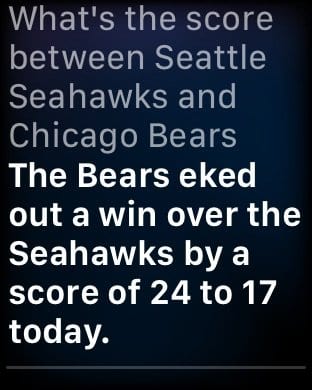 Of course, there are a couple of other things to keep in mind to ensure that your Raise to Speak experience is as smooth as possible.

Tip: If the Raise to Speak doesn’t work after the watchOS 5 update, try restarting your Apple Watch. It usually works after a restart.

The feature relies on a slightly different motion than simply raising the Apple Watch to view the time. The wearable can tell the difference between these two gestures and determine your intent, but sometimes it takes a little coaxing.

For example, to properly activate Raise to Speak, you may need to occasionally raise your wrist just a bit higher and closer to your face.

You’ll also need to use a normal speaking volume for Siri to comprehend your inquiry or request. Whispered voice commands doesn’t work as of watchOS 5.

Tip: After you ask Siri something, you can lower your wrist. You’ll feel a tap when Siri has a response.

On the other end of the spectrum, the feature uses proximity to the Apple Watch to determine intent. So Raise to Speak won’t be accidentally activated by other peoples’ voices.

Similarly, you’ll never have to worry about accidentally setting off your iPhone or HomePod device if you use Raise to Speak on your Apple Watch.

Other Useful Things to Know

There are a couple of other options in Settings that can affect your Raise to Speak experience. These aren’t essential tips, but they’re good to know if you use Siri a lot on your Apple wearable.

First off, you can actually change Siri’s speaking response volume. This is a handy feature, so the digital assistant doesn’t respond too loudly or quietly for your environment or circumstances.

Note: This will only change Siri’s speaking volume through the Apple Watch’s speaker, not headphone volume.

You can also edit when Siri actually responds vocally to the Voice Feedback setting. Find it in the same Settings —> General —> Siri menu as the last Siri option.

There are three options

Raise To Speak Not Working on Apple Watch, Here’s How To Fix

Is the new Raise to Speak feature not working correctly on your Apple Watch? Several users report that it’s a hit or miss and they can’t seem to find out what is causing the issue.

8 out of 10 times, its how you position the Apple Watch when using this feature that determines whether the feature will work or not.

As mentioned earlier, this feature does require Series 3 or later models running watchOS 5 and higher. The feature also doesn’t seem to work when you have your AirPods connected to your Apple Watch. Disconnect the AirPods and give it a try.

Here are a few guidelines that should help if you are facing this issue after upgrading to watchOS 5. Please try steps 1,2,3 and check. If that doesn’t work then you can try the steps 4 through 6 and test after each step.

If you are still having issues, its time to reach out to Apple Support and check with them

We hope that you found this helpful!