You are here: Home / Apple Watch / How To Use Spotify App on Your Apple Watch

Spotify has finally brought an official app to Apple Watch. It’s not yet a complete experience. Nonetheless, it’s here, and this is how it works.

Think of the Spotify for Apple Watch app as a DJ on your wrist. As such, it allows you to control tracks playing on your iPhone. At least for now, the features don’t include offline listening or LTE integration, which you’ll learn more about below.

You can find the free Spotify app on the App Store. Install it on your iPhone to get started. Be sure to log into your Spotify account through the app.

Once the app’s installed on the iPhone: 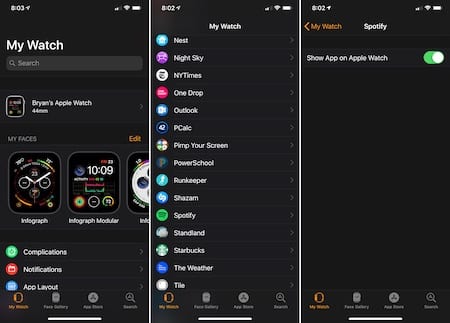 Note: Depending on your setup, you might already have Spotify installed on your Apple Watch. Once installed, the app shows up under the My Watch tab on the Watch app under the Install on Apple Watch section.

To get Spotify on Apple Watch, you’ll need:

Here’s the latest information on what you can (and can’t do) with the Spotify app on Apple Watch:

What You Can Do

Keeping with the DJ from your wrist theme, you can do the following:

Spotify Premium users can also use Spotify Connect to play music on other devices.

What You Can’t Do

Spotify 8.4.79 in iTunes is called the “first version” for Apple Watch, which almost certainly means that new features are coming. Until then, we’re stuck with these limitations:

Once Spotify has been installed on your wearable device, you’re ready to go.

There are currently two screens on the Spotify for Apple Watch app. On the first, you’ll see a Shuffle toggle and Recently Played playlists. Scroll using your finger or Digital Crown to see other playlists.

On the second screen, you’ll see the title of the current track plus five buttons: Back, Forward. Play/Pause. Favorites, and Connect. Scroll the Digital Crown up/down to change the volume.

If you can’t control Spotify through your Apple Watch, there are a few troubleshooting techniques you can try. These include:

No doubt, Spotify for Apple Watch will improve over time. For now, however, it only offers a limited experience. Nonetheless, for Spotify users, the introduction is a step in the right direction.