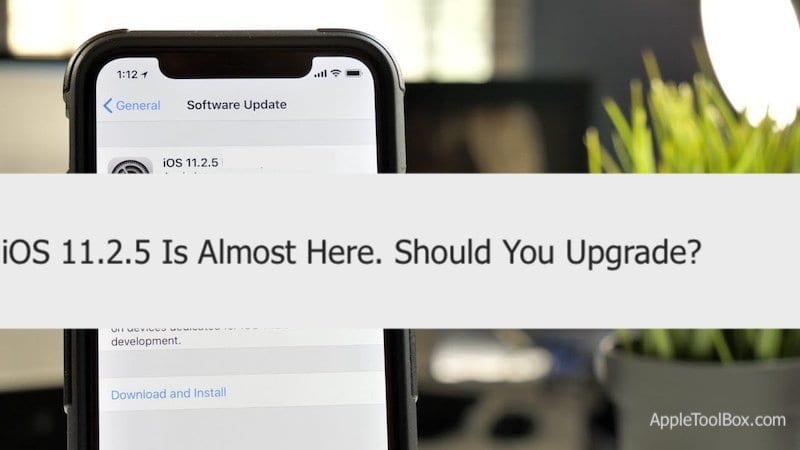 Apple this week is likely to release the latest update to its mobile operating system: iOS 11.2.5.

As far as what’s included in the new update, what isn’t included, and if you should upgrade, here’s everything you need to know about the new software.

At this point, iOS 11.2.5 is shaping up to be relatively minor update. No significant outward-facing changes have been spotted thus far, so it’s likely that the software is mostly going to focus on bug fixes, performance improvements, security patches and previously debuted features.

Most notably, iOS 11.2.5 introduces a fix for a recently discovered malicious link that could freeze and possibly crash iOS devices when sent in an iMessage. The so-called “text bomb” was dubbed chaiOS, and spread fairly quickly after it surfaced on Twitter last week.

According to reports from users who are beta testing iOS 11.2.5, the update seems to re-introduce AirPlay 2. Unveiled over the summer, the new generation of Apple’s audio streaming system comes with several new features such as multi-room audio playback.

Among smaller changes, iOS 11.2.5 also adds a new Siri ability that lets users quickly stream a news podcast just by asking the digital assistant. Notably, this feature has also rolled out in the iOS 11.2.2 software that was released post-Spectre and Meltdown.

Beta testers report smaller updates, including (but not limited to) the following.

First and foremost, although there were some early rumors suggesting that iOS 11.2.5 could feature the in-depth battery health data that Apple promised, it’s looking like that won’t be the case.

Such a feature hasn’t been included in any of the iOS 11.2.5 betas released thus far (and we’re seemingly on the last beta before the final version). So it’s unlikely that such the in-depth battery feature is going to make it into iOS 11.2.5.

Similarly, Apple CEO Tim Cook recently hinted that the battery-related throttling feature that’s spurred so much controversy could be manually toggled on or off by users in a future iOS update. This feature hasn’t been spotted in the iOS 11.2.5 betas, and we don’t have much of a time frame other than that it’s coming in a “future” iOS update. Chances are that the new battery feature will show up with iOS 11.3.

And, again, there haven’t been any UI tweaks, major features, or other significant outward-facing features spotted or reported by beta testers.

When Is It Coming Out?

It’s almost a certainty that the final version of iOS 11.2.5 is coming out this week.

Firstly, preliminary reports of iOS 11.2.5 beta 7 — released last week — suggest that Apple’s Feedback app has been removed. This usually occurs in the last beta before a final release.

Secondly, in a statement emailed to several news outlets, Apple confirmed that a fix for the “chaiOS” text bomb would arrive this week. Remember that the latest beta versions of iOS 11.2.5 have been confirmed to address the issue.

In other words, it’s likely that the “fix” Apple is talking about is iOS 11.2.5, and that it’ll arrive this week.

The Release Notes made available with the iOS 11.2.5 today feature quite a few big fixes.

HomePod support
– Setup and automatically transfer your Apple ID, Apple Music, Siri and Wi-Fi settings to HomePod.
Siri News
– Siri can now read the news, just ask, “Hey Siri, play the news”. You can also ask for specific news categories including Sports, Business or Music.
Other improvements and fixes
– Addresses an issue that could cause the Phone app to display incomplete information in the call list
– Fixes an issue that caused Mail notifications from some Exchange accounts to disappear from the Lock screen when unlocking iPhone X with Face ID
– Addresses an issue that could cause Messages conversations to temporarily be listed out of order
– Fixes an issue in CarPlay where Now Playing controls become unresponsive after multiple track changes
– Adds ability for VoiceOver to announce playback destinations and AirPod battery level

It’s recommended that you update to the latest version of iOS even if the feature list is rather sparse. For the most part, iOS updates contain important security fixes and stability improvements — so it’s always a good idea.

When iOS 11.2.5 rolls out to the public, you’ll be able to download and install it via Settings —> General —> Software Update.

As always, it’s smart to backup your iOS device to iCloud or to iTunes via a computer before you update should any complications arise during installation.