You are here: Home / Mac / How To Use Your iPad As A Second Display

It’s been a month since I upgraded from my 5th Generation iPad to the 2020 iPad Air (read the review here) and I’m still discovering neat hidden features that I didn’t know were there. A little over a week ago, I noticed a new option in the Menu Bar of my Mac, clicked it, and instantly my iPad became a second display.

Today, I’m going to show you how to do the same. I’ll cover how to do this on Mac natively, then on Windows with a third-party app. After that, I’ll get into whether or not the iPad is a viable second display.

Turn your iPad into a second display for Mac

First, let’s show how to do this on Mac since it’s much, much easier than you would think. All you need is a compatible iPad (scroll down to see if yours is compatible), an up-to-date Mac, and both devices to be connected to the same WiFi connection. Sorry, this won’t work on separate or cellular networks.

With these things in place, bring your Mac and your iPad to your desk. On your Mac, mouse over to the Menu Bar and open Control Center. 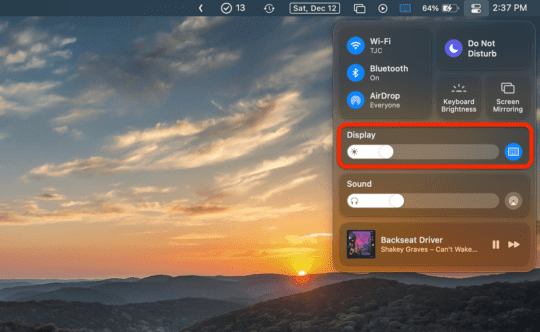 From here, click the section labeled Display (as highlighted above). If your iPad is compatible and connected to the same network as your Mac, you should see it listed under the display brightness slider. 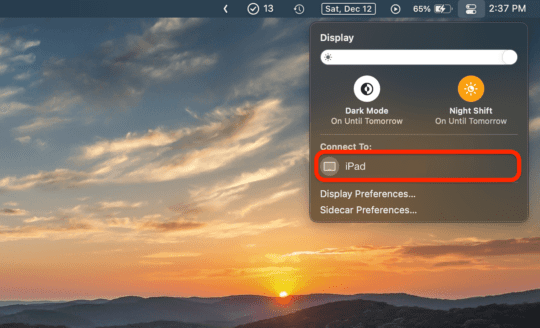 Click it, and your iPad should automatically connect to your Mac. The screen on each will go dark for a moment, and when it comes back on, your iPad will be a display for your Mac.

Well, that’s kind of it. There are some options you’ll probably want to adjust before moving on.

If you’ve never used a second monitor with your Mac before, it’s pretty simple. By default, your iPad should act as a Separate Display. This means that you can show different windows and apps on your Mac and your iPad. To interact with your iPad, drag your mouse off the right side of your Mac screen. It should appear on your iPad.

If that doesn’t work for you, don’t worry – I’m about to show you how to edit this anyway, so regardless of how your iPad is currently connected to your Mac, we’re about to change it.

In your Menu Bar, you should see a new icon highlighted in blue. Click it. 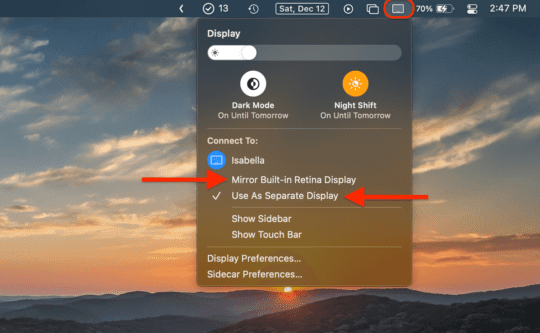 Choose which side your iPad is on in Sidecar

If you choose to use the Separate Display option, which I recommend, you get the option to “position” your iPad around your Mac screen. To pull up this option, click Display Preferences from the popup.

This will open a window in System Preferences on your Mac and your iPad. Focus on the one on your Mac, as it has the settings we want to edit. 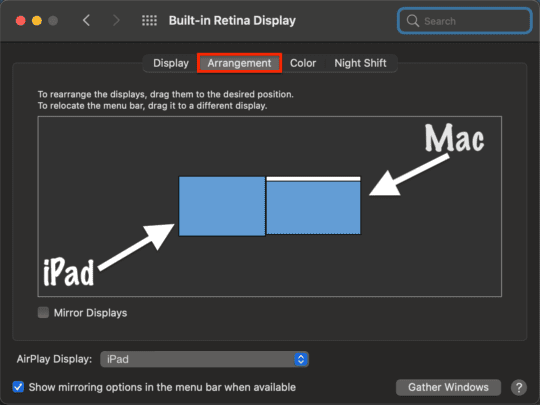 Click the tab labeled Arrangement and you should see an image like the one above. Each blue tile represents one of your screens. The one with the white bar on top is your Mac, and the other is your iPad.

You can drag each of these around to position where your Mac perceives your iPad. In the image above, you can see that I have my iPad on the left of my Mac. That means I can interact with my iPad by moving my mouse off of the left side of my Mac screen. You can place your iPad above, below, left, right, or diagonal to your Mac.

We’re in the home stretch now. There are just a few more settings to get into.

Open the System Preferences app. You should see a tile labeled Sidecar. Go ahead and click it. 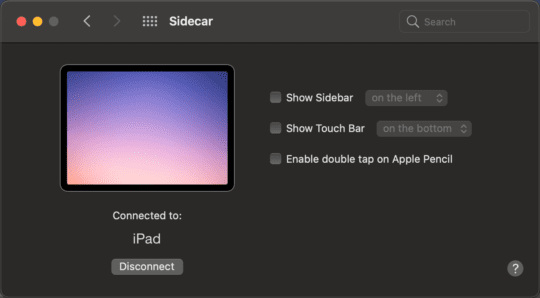 Here, you’ll see a few different options. If you look back at your iPad, you’ll notice bars along the side and bottom of the screen. 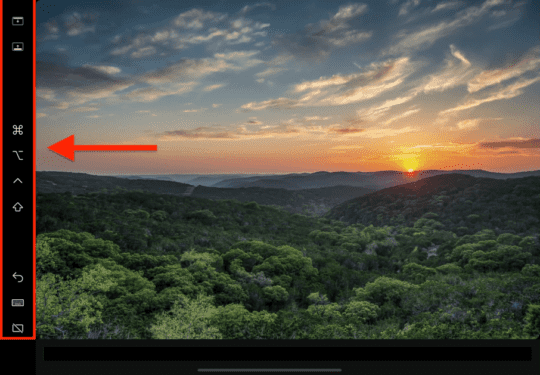 The checkmarks in your Sidecar settings allow you to position, show, and hide these bars. I haven’t found these bars to be too helpful, so mine are hidden, but you can see how you like them.

And that’s it – for real this time! That’s everything there is to know about using Sidecar with your Mac.

Use your iPad as a second display for Windows

Not all iPad owners are Mac users, and not all Mac users have a Sidecar-compatible iPad. For those who fall into these categories, here’s your workaround:

Third-party apps. That may sound less than ideal, but these apps work surprisingly well and allow you to connect your iPad to any computer, not just your Mac. You can use them with Mac, too, which makes them a great alternative for users with an older Mac or iPad.

The most popular of these apps is Duet, which costs just $10. There are other options as well, such as Splashtop’s Wired Display app. These offer wired and wireless connectivity, so make sure you check which type of access you’re getting before you pay!

Sidecar is a pretty recent update, only coming around in 2019, so you might not have the right hardware for it (I didn’t until recently). Here are the iPads that support Sidecar:

And here are the Macs that support Sidecar (running macOS Catalina or newer):

Is the iPad a good second display?

Hesitantly, I would say no. That’s not to say I dislike having this feature; I’ve been using it every day since I discovered it. But I wouldn’t let that sway your decision to buy an iPad.

Out of the box, the iPad doesn’t have an easy way to hold itself upright. This is a problem for any desktop monitor. Additionally, the iPad is small; even the largest 12.9″ iPad, which feels massive in the hand, becomes tiny on your desk.

Lastly, the feature I was most excited about using on my iPad, the touchscreen, feels very underused in Sidecar. That’s because Sidecar treats the iPad screen as a trackpad, not as a multitouch screen. To scroll, you have to use two fingers; and drawing is extremely limited.

Essentially, your Mac has no awareness that the display is an iPad, so you don’t get any cool iPad-specific features. It’s just a handy feature to have if you want another screen, and that’s about it.