You are here: Home / iPhone / iPhone 4 Loses Signal (“Death Grip” Antenna Issue): Why and How to Fix (Scotch Tape) 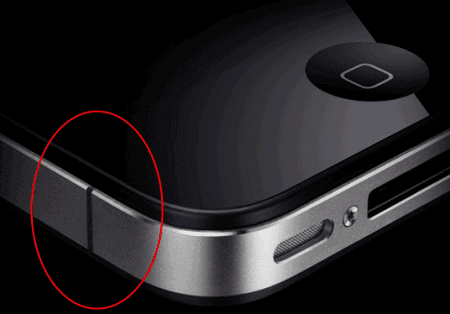 Several new iPhone 4 purchasers have noted an issue in which the device loses signal reception and network speed when it is held in a certain manner–specifically when the phone is gripped on the sides near the bottom of the device, where the small seams (black bars) are. Here are two YouTube videos demonstrating the phenomenon:

So, it appears that closing the circuit generated by the antenna (which runs along the metal strip surrounding the iPhone 4) with your hand can cause a significant degradation in signal.

Because of the location of the antenna, some users have noted that this problem is more likely to occur when held in the left hand.

Use a case. As demonstrated in the second video above, simply putting a case that covers the seams on the iPhone 4 can alleviate this issue, as it blocks your hand from closing the antenna’s circuit. Several users have experienced success with Apple’s “bumper” case.

Hold the phone differently. Simply holding the device in a manner that does not cover the seams at the bottom can eliminate the issue.

Scotch tape. A surprisingly effective and tremendously easy fix: simply adhere a small strip of scotch tape over the seams on the iPhone 4. This prevents the hand from closing the antenna circuit (as described above) and resolves the issue for a number of users.

Turn off 3G. Some users have reported that the signal degradation issue does not occur if the iPhone 4 is operating in EDGE-only mode. To turn off 3G, navigate to Settings > General > Network and slide 3G to off.