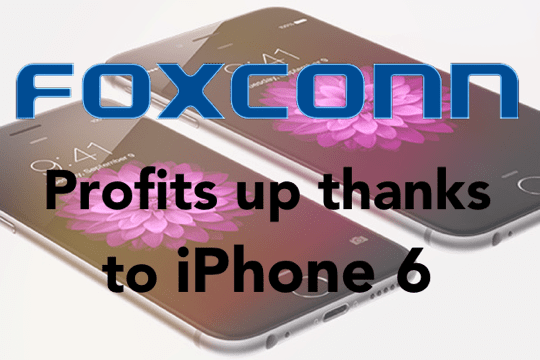 Korean news site iNews 24 today reported that Taiwanese hardware manufacturer Foxconn achieved a net profit of 11% in the July to September financial quarter, thanks largely to the runaway success of Apple’s iPhone 6.

Foxconn, which is also known as Hon Hai Precision Industry Co., Ltd, is a Taiwanese electronics manufacturer with headquarters in New Taipei, Taiwan. The company has been an Apple partner for each successive generation of iPhone, but also makes non-Apple devices for competitors such as Chinese rival Xiaomi, currently in third place in terms of global smartphone unit sales behind Samsung and Apple.

Foxconn, which is one of the world’s largest electronics manufacturers, increased production in Q3 helped by overall sales which rose 3.4% in the same period. The company’s bottom line improved not only by the huge iPhone 6 orders, but also due to its lucrative supply contracts with Xiaomi, Huawei, Lenovo and Sony, as well as new smartphones from Blackberry (who signed a 5-year deal with Foxconn in 2013 to produce models such as the Q20 and Z3).

Apple’s smartphone competitors accounted for around two-thirds of mobile phones sold in the third quarter, and it’s these mass market mid and low-end smartphones which are increasingly being produced by Foxconn. But despite the rather rosy financials, Foxconn’s Q3 net profit growth declined slightly compared to the second quarter (which stood at 19%).

Since the iPhone 6 remains the world’s number one selling handset and is still in short supply two months after launch, Foxconn should see its revenues grow further next quarter if Apple continues its record-breaking sales run.

In future, it is widely expected that Chinese smartphone companies will generate substantial revenue for Foxconn – especially Xiaomi which is a rising star in the Android OEM market, designing handsets such as the popular Mi4. But for the foreseeable future, Apple will surely remain Foxconn’s biggest and most important customer.

Last week, Apple Toolbox reported that Apple was aiming to increase iPhone 6 production with more manufacturing partners – you can read more details about that story here.