Here’s a look at where things stand on the 2019 and 2020 iPhone lineup based on the latest rumors.

The new handsets will almost certainly include a new and improved processor to replace the A12 Bionic chip, and next-generation Neural Engine found on the 2018 models. The new chip will be faster and more advanced than the previous model, of course. Beyond this, little is known about the chip.

There’s also reports that the largest of the three 2019 iPhones will include a rear three-camera system. With this, they’ll be a larger field of view and a wider range of zoom. At the same time, the least expensive iPhone XR successor is likely to gain a dual-camera. Also, don’t be surprised if the megapixels on all three camera increase; they almost always do. Camera-wise, Apple is also expected to reveal an enhanced version of its Live Photos feature. The next version will increase the length of the video from three seconds to six seconds.

In terms of hardware, the iPhone XS and iPhone XS Max successors are expected to include an OLED display, while the next version of the iPhone XR will stick with LCD. This decision makes sense and allows Apple to continue to offer a lower-priced iPhone.

Late last year, Apple revealed the 11-inch iPad Pro and third-generation 12.9-inch iPad Pro. Both tablets were the first from Apple to include Face ID. They were also the first Apple mobile devices to support USB-C (not Lightning) for charging and expansion. Apple’s not likely to make the same move on iPhone — at least in 2019.

On the one hand, I respect Apple’s apparent decision to stick with Lightning on its top-selling product. Moving to USB-C would cause the same kind of short-term aggravation among users as did Apple’s decision to remove the headphone jack on the iPhone years ago. With iPhone sales weakening, this is one headache Apple doesn’t need.

In sticking with Lightning, Apple is also expected to ship the 2019 iPhones with the long-used (and slow) 5W adapter with a USB-A connector.

No doubt profit margins are the reason behind this decision. With the OLED iPhone how passing the $1,000 barrier, a move such as this is unacceptable. Wouldn’t you agree?

The lack of significant hardware changes on this year’s iPhone lineup follows Apple’s traditional pattern of making outward changes every other year. Because of this, I would expect the most significant changes for this year’s models will arrive through the next iOS software update.

So-called “iOS 13” could include an all-new dark mode, redesigned Home screen, revamped Files app, new emoji, and more. The biggest changes arriving on iOS no doubt won’t be revealed until the new iPhones are announced. Those new features will almost certainly be exclusive to the 2019 iPhone models. 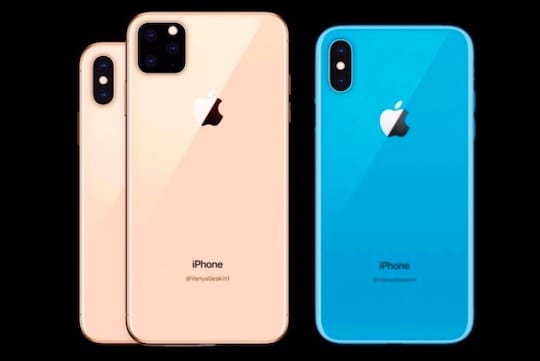 If you’re waiting for a redesigned iPhone, you’re going to have to wait until September 2020. Although rumors about next year’s iPhone lineup remain scarce, at best, what we are hearing suggests big things are coming.

And yes, I would expect Apple to ditch Lightning for USB-C on next year’s models.

The removal of the notch would eliminate one of the most controversial features of the iPhone X era. Designed to house Apple’s TrueDepth camera system, the notch has never been popular as a design choice. Nonetheless, it doesn’t appear as though Apple has chosen a successor.

One possibility is the notch isn’t necessarily removed, but reduced in size, so it’s less noticeable. Another option is that Apple goes with a “punch hole” redesign. Now being revealed on new Android-based devices, this design is likely to include a front-facing camera in a small “Infinity-O” hole located on the top-left side of the screen.

As Bloomberg first noted, the proposed rear-facing 3-D camera is being designed to scan the environment and create three-dimensional reconstructions of the real world.

The laser-powered 3-D camera would enhance augmented reality on the iPhone, allowing for more accurate depth perception and placement of virtual objects.

The introduction of a new 3-D camera is likely to be a precursor to the later arrival of Apple’s long-rumored augmented reality glasses.

Removing LCD iPhones from the market makes sense, assuming this doesn’t lead to another round of price hikes across the lineup. LCD is out of vogue and OLED provides a much better display.

In terms of 5G, this one is a no-brainer. When Apple sees the US-based carriers have fully embraced the 4K successor, it will arrive on the company’s mobile products.

What’s missing from the 2019 and 2020 iPhone lineups is the reintroduction of a 4-inch handset. For much of 2018, it looked like Apple was set to reveal a second-generation iPhone SE. Instead, Apple killed the existing model in September. Many feel this is a mistake.

While I love my 6.5-inch iPhone XS Max, it’s certainly not for everyone. Many users would happily buy a next-generation 4-inch iPhone with all the bells and whistles of the current lineup. Unfortunately, this doesn’t appear to be the direction Apple is taking although anything is possible. Perhaps Apple’s working on something that will surprise.

We have some new rumors from credible sources around the latest iPhone line-up. Please stay tuned this week as we validate and confirm the information.

First introduced in 2007, the iPhone has become a mature product. This means hardware and software changes will be few and far between moving forward. If you own a 2018 iPhone, the odds are pretty high that you don’t need a 2019 model. Instead, you should wait until the 2020 launch. If you’re in the market for an upgrade, I suggest buying a 2018 iPhone that’s on sale or patiently wait until the fall.