You are here: Home / News / Is Apple Building A Search Engine?

However, there is one announcement that Apple hasn’t made, one which has been a rumor since as early as 2008.

Yep, you read that right. People have long suspected that in Apple’s basement, tucked between a self-driving car and augmented reality goggles, are the blueprints for fruit-powered search.

Rumors of Apple’s search engine have largely died out over the years, as there hasn’t been much to go off of other than speculation. Recently, though, clues have started to surface that suggest the tech giant may still have plans to launch an independent search engine.

Is Apple building a search engine? Studying the latest rumors

As it stands now, there is no official confirmation from Apple that it’s working on a search engine. All we have to go off of are clues, rumors, and hints at what the tech giant might be working on.

These rumors primarily come from updates found in iOS 14, as well as hiring patterns by the tech giant. While not confirmation, both are strong indicators that Apple may have something in the works, especially when you consider the current market.

The first cause for gossip involves recent updates to AppleBot. For those who don’t know, AppleBot is Apple’s web crawler, a piece of software that constantly scours the web, indexing information and pages as it does so. When you ask Siri a question and she answers it instantly, it’s generally because AppleBot has indexed that answer for her.

In July of 2020, Apple updated AppleBot with certain features and changes that are very similar to features found in Google’s search crawling practices. These changes include:

This alone doesn’t mean that Apple is building a search engine. After all, AppleBot is used for features like Siri, so of course, Apple is looking to improve it. But this isn’t a standalone update.

It’s publicly available knowledge that Apple is looking to hire search engineers in a variety of capacities. You can see this for yourself by clicking this link, but essentially, these roles revolve around improving general search, Siri search, text-based search, machine learning in search, artificial intelligence in search, search ads, and search quality.

While many of these job positions are tied to Siri, Maps, and the App Store, many of them aren’t. And it’s obvious from the way Apple conducts its business that it wouldn’t post a job listing with a title like “Need engineers for secret Apple Search Engine project”.

There is still some ambiguity as to the specifics of these roles, but one thing is clear: Apple is investing in search and wants to bring on new talent in this field.

Since 2017, Apple has been using Google as the default search engine for Spotlight and Siri search. Spotlight, an underrated feature of iOS, allows you to pull down on your Home Screen and search for apps, files, and web results.

Before this summer, Spotlight and Siri would pull results from Google and allow you to tap on them, pulling up the results in Google Search.

In iOS 14, this has changed (likely due to improvements with AppleBot). Now, you’ll see pages, articles, and images directly in Siri or Spotlight Search, rather than visiting Google. Though a seemingly small change, it shows that Apple is moving away from its dependence on Google Search.

Why would Apple build a search engine?

Let’s say all of this speculation is true, and in 2021 Apple debuts the latest and greatest in search technology. Everyone cheers from behind their webcams as a prerecorded message from Cook demos Apple Search. Amid the noise and excitement, one voice quietly asks its screen, “Why?”

Indeed, it might seem an odd move for Apple to make its own search engine. The market is currently under a chokehold from Google. Additionally, Google provides an excellent service, likely better than what Apple would come up with on its own. So why bother trying to break into a market that Apple has little chance of capturing?

There are a few different reasons. The first is probably the most obvious, and that’s independence. Just this year, Apple announced they would be moving to Apple-based Silicon in place of Intel chips. It’s clear that Apple wants to avoid relying on other companies as much as possible. So being able to stand apart from Google and Bing would be a boon for the company.

The second reason is services. Apple Music, TV+, News+, iCloud, and the recently-released Apple One and Fitness+, all come at a time when hardware sales are plateauing. By building a search engine (and monetizing it through advertising) Apple could create something just as profitable and popular as the App Store.

Then, of course, there’s the Google Dilemma.

The Google Dilemma is something that Apple and its fans have been aware of for some time. In 2018, the issue was thrown to Tim Cook by an interviewer from HBO. They asked how Apple (who champions user privacy) could allow Google to pay them billions every year for the right to be the default search engine on iOS when Google’s search engine is known to violate consumer privacy.

To his credit, Tim Cook didn’t deflect the question. Instead, he stated that while he knows that having Google as the default search for the iPhone is less than ideal, it provides the best experience to customers. This means that as much as Apple invests in its privacy, it is aware of its shortcomings.

Apple has features in place, such as tracker blocking and private web browsing, to reduce the privacy concerns around Google Search, but the only way to completely bypass these concerns would be to make a different search engine the default. In other words, Apple Search would solve the dilemma of using Google as the iPhone’s default search engine.

It’s difficult to know if an Apple search engine would change SEO. For those who don’t know, SEO is short for Search Engine Optimization, and it’s a set of practices used to rank your content higher on Google Search. As an example, I’m using the keywords “Apple search engine” semi-often in this article so that you’ll be able to find it when you search with those keywords.

Since Google holds 95% of the search engine market, the entire SEO industry revolves around Google Search. If Google changes the way it ranks pages, then the SEO industry changes, too.

For Apple’s search engine to change the way the SEO industry operates, it would need to use significantly different ranking practices from Google. Based on the data we have on AppleBot, this seems unlikely. While the two wouldn’t be identical, I doubt Apple would use a system so radical that there would be a need for “Google SEO” and “Apple SEO”.

How to make your searches private on iOS and macOS

For many, the dream of an Apple Search engine stems from a hope for more private internet browsing. While Safari gets substantial privacy improvements every year, it doesn’t change the fact that as soon as you search for something on Google, your data is scraped. 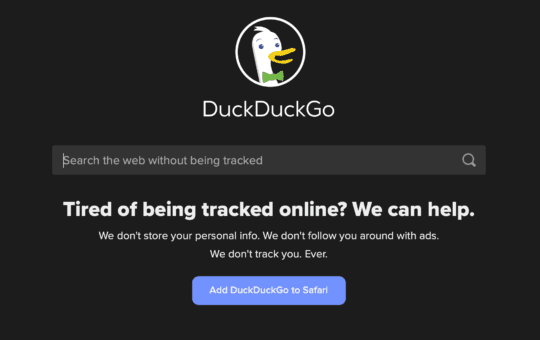 Fortunately, you don’t need to wait to find out if Apple will release its own search engine. In case you didn’t know, You have a couple of different options for search engines on your Apple devices, one of which is DuckDuckGo.

DuckDuckGo is the go-to for searching the internet privately. The results are nearly as good as Google, it has more features than Google, and it’s a trusted privacy solution.

To change your default search engine on iPhone to DuckDuckGo, open the Settings app, tap Safari, then Search Engine, then DuckDuckGo.